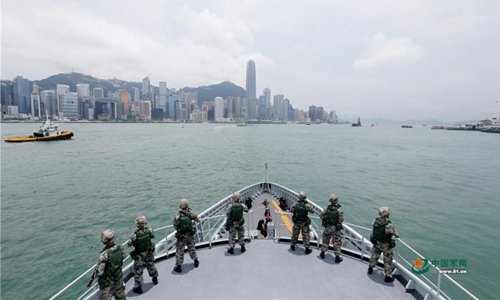 The Hong Kong Garrison of the Chinese People's Liberation Army (PLA) holds a drill in waters near Hong Kong, June 26, 2019. Members of the army, navy and air force of the PLA garrison in Hong Kong took part in the joint naval and air patrol exercise that aimed to review and raise the units' combat abilities in emergency dispatches, ad hoc deployment and joint operations. (Photo: 81.cn)

The Hong Kong Special Administrative Region (HKSAR) handed over the Central Military Dock to the Chinese People's Liberation Army (PLA) Hong Kong Garrison on Tuesday, a move deemed by the HKSAR Chief Executive Carrie Lam as a historic moment that fully demonstrates the HKSAR's relationship with the central authorities under "one country, two systems" and carries important constitutional significance.

The 150-meter-long Military Dock, located on the northern shore of Hong Kong Island, is the last military facility required to be re-provisioned for use by the Hong Kong Garrison, said Lam in a speech at the handover ceremony, according to a press release published on the website of the Government of the HKSAR.

After Hong Kong's return to the Motherland, 18 military sites have been used and managed by the Hong Kong Garrison for defense purposes, with the Military Dock being the only exception due to various challenges in reclamation works, Lam said, noting that the handover of the Military Dock on Tuesday means that the HKSAR Government has completely fulfilled its relevant responsibilities.

Lam reiterated that the Law of the People's Republic of China on the Garrisoning of the HKSAR (the Garrison Law) is a national law applicable to the HKSAR under Annex III of the Basic Law.

"Defense is of utmost importance to the country and must be fully safeguarded," Lam stressed.

While no persons can enter military sites without authorization, the PLA Hong Kong Garrison has, in response to recommendations provided by the HKSAR Government, agreed to consider opening the Military Dock on a discretionary basis to allow the public to enter non-restricted areas of the Military Dock as long as defense work is not affected, Lam said, noting the move fully showcases the Hong Kong Garrison's care for local residents.