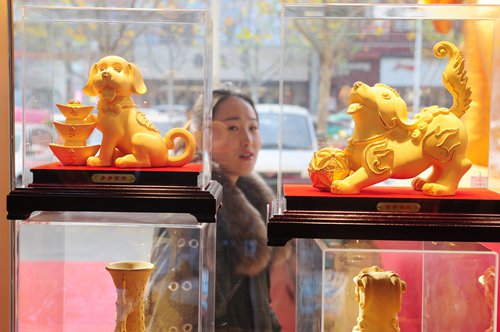 A passer-by looks at Year of the Dog-themed gold ornaments in a shop in Fuyang, East China's Anhui Province on January 1. Photo: VCG

Domestic consumption of gold has increased ahead of the Chinese Lunar New Year holidays, as many see the precious metal as both an ideal gift and a sound investment.At a Chow Tai Fook jewelry store in Beijing on Sunday, a 20-something consumer bought two gold bracelets worth nearly 6,000 yuan ($952.8).She told the Global Times it would be the first time that she has given gold bracelets to her mother and grandmother. "I wanted to buy something meaningful for them. So gold is a good choice," she said.To boost sales, many shopping malls and gold stores are organizing promotions - ranging from price reductions of 10 to 40 yuan per gram to a discount of 30 percent - to lure customers. An employee at the Chow Tai Fook store said that recent sales have increased by nearly 30 percent compared with three months ago.Data from China UnionPay showed that consumption of gold increased 20.4 percent month-on-month in January 2018, the national broadcaster CCTV reported on February 3.In January, average single gold transactions reached 6,540 yuan, jumping 17.7 percent month-on-month, according to CCTV.A longer selling season this year, together with the festival factor and wedding season, is contributing to the growth of gold sales, said Zhou Yinghao, a senior analyst at the Beijing Gold Exchange Center. "The upcoming Lunar new year is about half a month later than in previous years, so the gold selling season is much longer," Zhou told the Global Times on Sunday."Besides, many consumers buy gifts not only for their families but also for Valentine's Day. And the wedding season is also coming in areas such as East China's Zhejiang Province and South China's Guangdong Province. These directly drive gold demand," he noted.Reasonable investmentGold products sold by China's banks have also become hot items recently.A member of staff at a commercial bank in Hefei, East China's Anhui Province, who wished to remain anonymous, told the Global Times that many clients purchase gold items as presents for their children.In addition to gold jewelry and bars, many banks sell other precious metal goods such as gold-made bank notes, commemorative coins and ornaments.However, as gold bars cost more, fewer customers buy them, the staff member said, adding that consumers are more eager to invest in gold."Now, investors do not rush to buy gold because of fluctuations in prices. Most banks provide various gold products, such as paper gold, which have low investment thresholds and are easy to cash in," she said.Price pressureAccording to a report posted on the website of the China Gold Association, Chinese investment in gold dropped in 2017 because of the effect of the rise in US interest rates. Reuters' metals consultancy GFMS estimated that China's gold investment slid 9 percent year-on-year to 215 tons last year.With a strengthening US dollar, gold prices have seen a declining trend in recent weeks and downward pressure persists, experts said.In the short term, the spot gold price is unlikely to rebound, Zhou said. "The US dollar index has shown a recovering trend after dipping to a two-year low of 88.43. Also, the spot gold price is expected to edge down by about $30 an ounce," he noted.Given the yuan's recent appreciation against the Hong Kong dollar, more residents in the Chinese mainland may go to Hong Kong to purchase gold jewelry during holidays, he said.