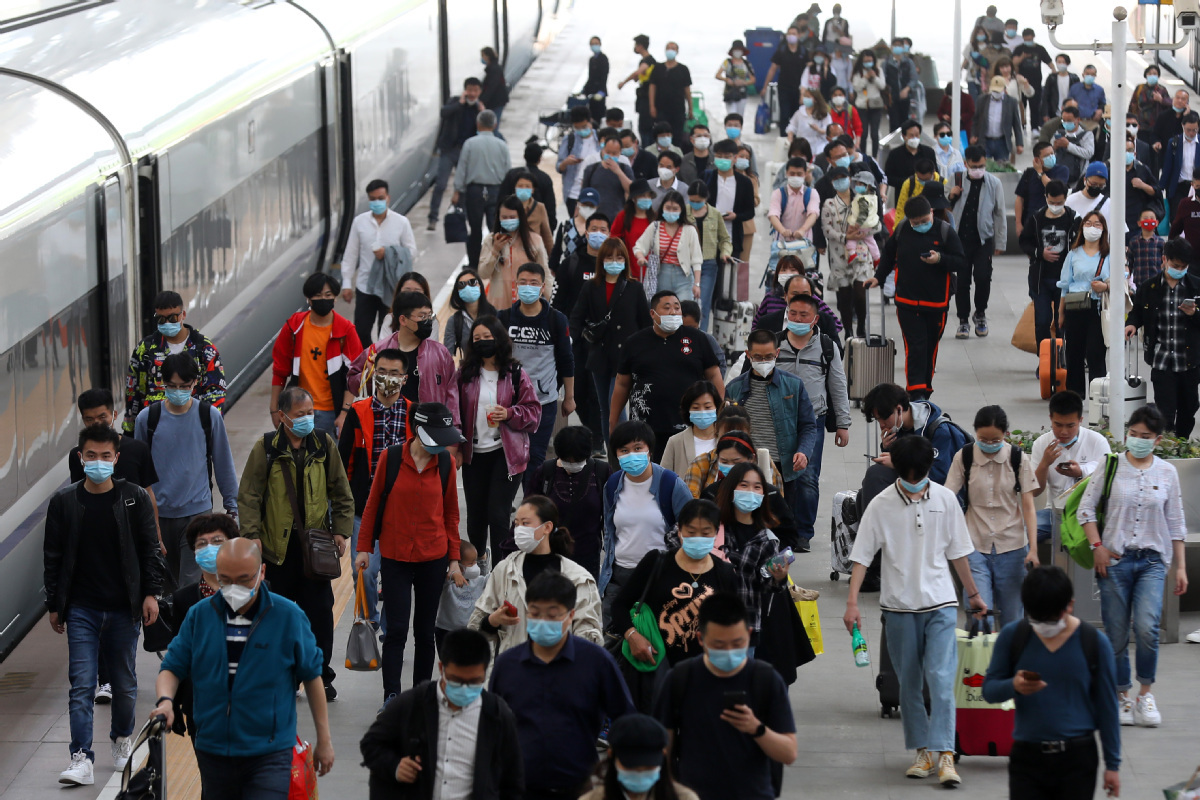 Passengers head to board their train at Nanjing Railway Station on Thursday. More than 117 million domestic trips are expected to be made by Chinese passengers during the upcoming five-day May Day holiday, according to the Ministry of Transport. (Photo: China News)

China is expected to see an uptick in travel during the five-day May Day holiday as the coronavirus outbreak has leveled off across the country.

However, the flow of travelers will be far below last year's level, according to the Ministry of Transport.

The country will see 117 million passenger trips during the holiday, or 23.36 million trips per day, ministry spokesman Wu Chungeng said at a news conference on Thursday.

Although travel volume has been gradually rebounding, the expected daily figure is only 34.8 percent of last year's daily passenger trip volume, he said, adding that most travelers would drive themselves short-distances within provincial borders.

This year's May Day holiday, Friday to Tuesday, has been extended, Wu said, but the public has lost much of its desire to travel as epidemic prevention and control become a long-term norm. Cancellation of non-urgent travel is the current trend.

In the civil aviation sector, 2.9 million trips are expected during the holiday, about 580,000 trips daily, according to the Civil Aviation Administration of China.

Yu Biao, director of the administration's transport department, said on Thursday that daily passenger trips during the May Day holiday may increase by 43 percent compared with the three-day Tomb Sweeping Day holiday in early April. However, this holiday still marks a year-on-year drop of about 66.8 percent.

"The overall passenger load of flights, at no more than 70 percent, will be significantly lower than the same period of previous years," he added.

The railway network is expected to handle a daily average of 5 million passengers during the holiday. Although that is only a third of last year's figure, it shows an apparent increase over earlier days this year, according to the Ministry of Transport.

Railways will operate about 5,700 passenger trains daily from Thursday to Tuesday, an increase of more than 700 trains over the pre-holiday period, and will add more trains in line with passenger flow changes, according to China State Railway Group, the country's top railway operator.

To boost travel, the railway system is offering discounts on over 20 intercity high-speed railway lines, cutting second-class seat prices by up to 45 percent, the rail company said.

With domestic travel on the upswing, the Ministry of Culture and Tourism has called for efforts to ensure safety.

Travel agencies are required to conduct safety assessments of tourist products and tourist routes, to strengthen safety education for tour guides and to review the qualifications of chartered tourist vehicles and their drivers, Luo Shugang, minister of culture and tourism, said at a news conference on Thursday.