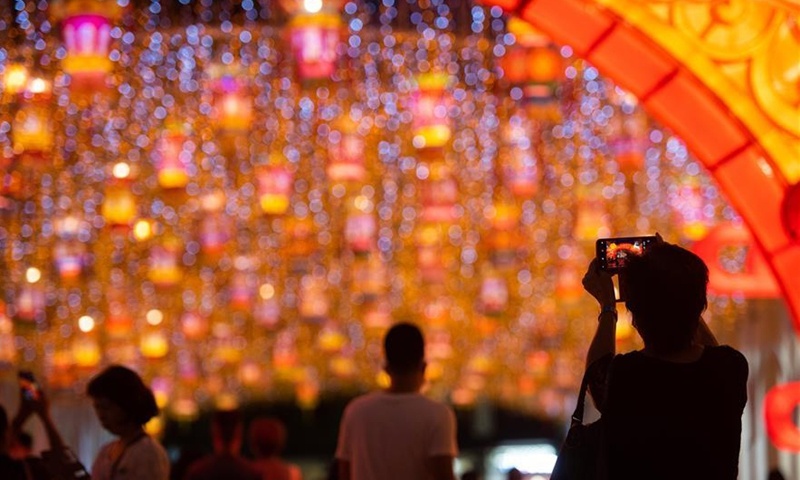 Citizens take photos of illuminations at the Largo Do Senado in Macao, south China, Sept. 25, 2020. Main streets, squares, gardens and buildings in Macao are decorated with illuminations to celebrate the upcoming Mid-Autumn Festival and the National Day holiday.(Photo: Xinhua)

China is expected to record 550 million domestic tourists during the upcoming eight-day Mid-Autumn Festival and National Day holidays starting on October 1, and the sector is resuming full operations while normalizing COVID-19 epidemic prevention and control.

The Ministry of Culture and Tourism made the prediction on Sunday at a press conference, citing data from the China Tourism Academy, which is under the ministry.

Tours both within and between provinces are booming.

As of mid-September, 29,694 travel agencies had resumed operations, accounting for 75.7 percent of the total, and group tourism recovered to about 40 percent of the year-earlier level, said the ministry.

Online travel companies' business have recovered to about 40 percent of the-year earlier level, and star-rated hotels' business had a recovery rate of 91 percent.

A report sent by one of China's largest travel agencies, Ctrip, on Sunday to the Global Times predicted more than 600 million domestic trips, or 70-80 percent of the normal level. The longer holidays this year will offer people more options, a Ctrip staffer said.

As of mid-September, flight bookings for major domestic routes were up more than 200 percent from the previous month, and the most popular trains were fully booked, Ctrip said.

Both the Mid-Autumn Festival and the National Day fall on October 1 this year, and people will have eight consecutive days' holiday.

The report said that Lijiang, Southwest China's Yunnan Province is one of the most popular destinations for private travel groups, despite the recent detection of two COVID-19 cases imported from Myanmar.

Hotels and major scenic spots in Yunnan are disinfecting their premises, and many will adopt crowd limits and require appointments for entry.

A hotel owner in Lijiang told the Global Times that all rooms were booked two months ago. Each room has a medicine cabinet with antipyretic drugs and a thermometer, said the owner.

Cultural industries are also doing well. The ministry said that as of mid-September, 790 theaters had reopened nationwide, accounting for 36.5 percent of the total, and 47,600 dance and entertainment venues resumed business, with a recovery rate of 93.3 percent.

In the first half of 2020, the operating revenue of network performance businesses nationwide reached 42.73 billion yuan, up 34 percent year-on-year.

Compared with thriving Chinese markets in the post-epidemic era, the US is still suffering from the long-lasting pandemic. The Trump administration has rushed to resume work and production despite total confirmed cases of COVID-19 having surpassed  7 million, with a death toll of 204,490, according to data from John Hopkins University.

Analysts said that there is almost no way for the US to curb community transmission, given the high number of patients, and frequent outbreaks are inevitable.

What the US is doing is waiting for vaccines or possible herd immunity, analysts said.