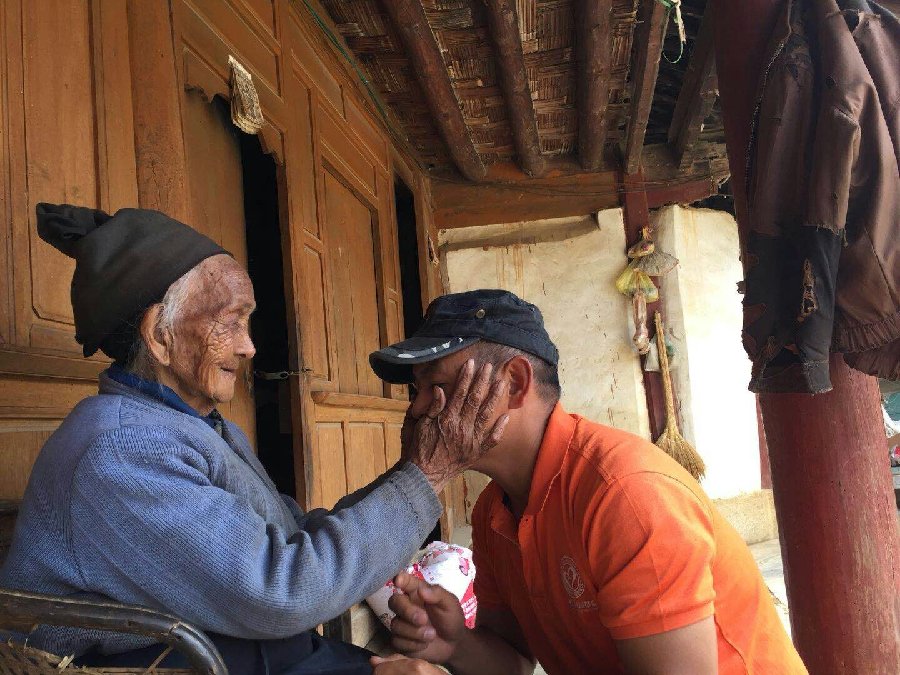 The 72-year-old man has long been troubled by hemiplegia. With no wife or children, he lived with his mother in Zhazishu, a remote mountain village in Shidian county, southwest China's Yunnan Province. His mother and siblings passed away several years ago.

When Li Liping lifted the old man out of bed carefully and washed him in a plastic bathtub with nine other volunteers, Li Zhengxiang laughed like a child.

"If it were not for him, I may have never gotten up and would have spent the rest of my life in the dark," the old man said.

Li Zhengxiang gets a government subsidy of 740 yuan ($110) a month, about the same amount as the county's rural disposable income, but his days come and go with a sad monotony.

He lives alone, lying in bed all day and relying on his nephew and neighbors for food and used a plastic basin beside his bed for excretion. 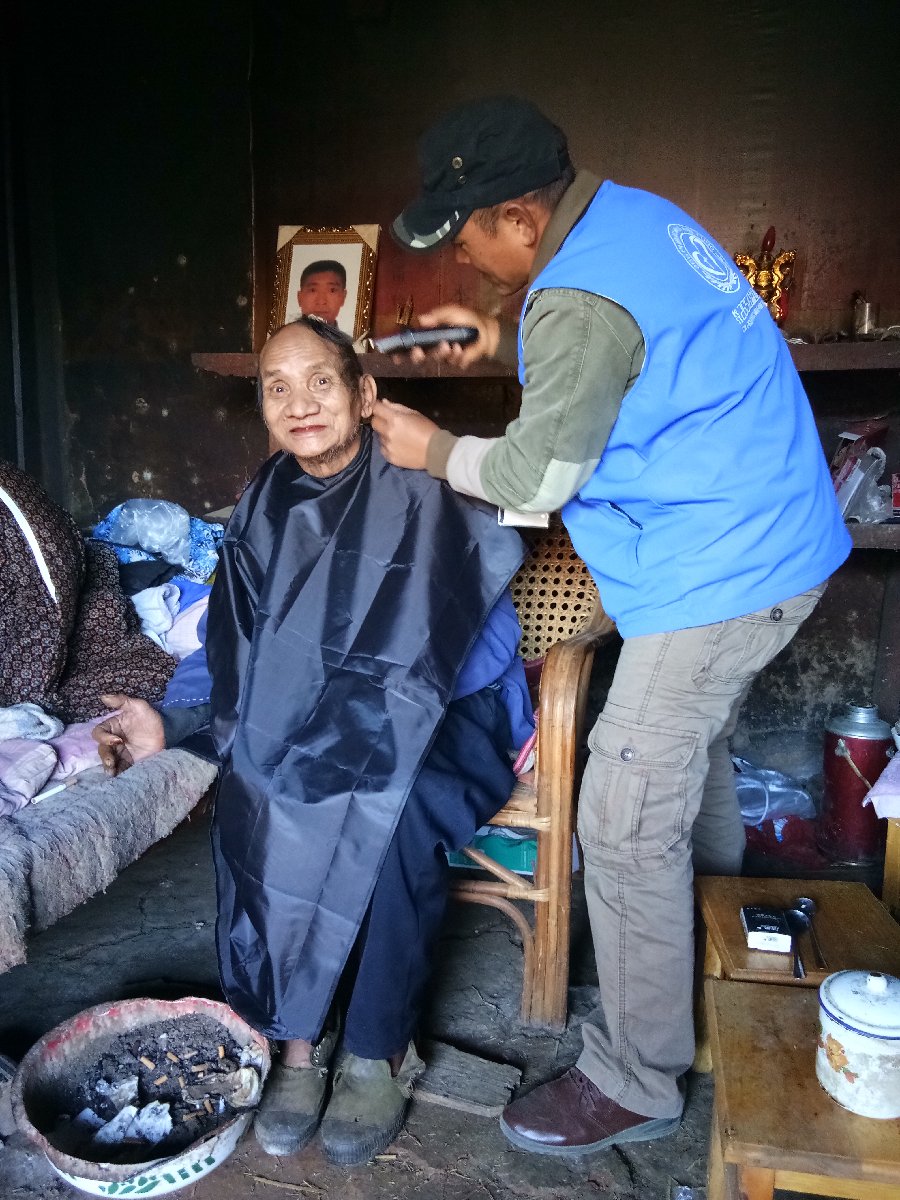 "My spending is limited. I'm poor in spirit rather than materially," he said.

Since 2017, the senior's life started to get better thanks to Li Liping, a selected volunteer by "caring rural left-behind elderly" program launched by the local government and a public welfare foundation Changjiang 265, which defines its mission as providing home-based services to help rural left-behind live happily in old age.

To celebrate the Spring Festival which fell on Tuesday this year, Li Liping sent seniors in the village couplets and gifts, cleaned their houses and cooked them meals.

"Most of them are not very talkative and sometimes can't even hear me, but a smile is always the best way to communicate," said the volunteer.

Each selected local volunteer is responsible for at least 30 households and must take three professional training courses before carrying out the work, according to Zhong Tiehua, manager of the program.

"During regular visits of about three times a month, the volunteers keep the elderly company by chatting with them, sharing the latest news, learning about and solving their problems, as well as doing some housework," Zhong said.

Shidian has more than 58,000 elderly over 60 years old, over 16.7 percent of its total population, among which at least 3,700 live alone or rarely see their families.

"With the young heading to cities for jobs and opportunities, living alone has become a common occurrence in rural China," said Duan Yuyuan, head of the county's civil affairs bureau.

"Living in remote mountains, some of them have lost the abilities to take care for themselves due to aging and illness, and some were not even discovered to have passed away until several days after death," he added.

To keep the old company, Shidian has set up elderly centers and nursing homes where people can meet and talk, but it's not very effective as many rural seniors are reluctant to leave their homes and activities are just a one-time thing without long-lasting effects.

"Home-based services, however, supplement our work as it can benefit more aged people and provide targeted and sustainable care," Duan said.

Since the program opened its doors in 2017, it has worked with local governments in provinces of Yunnan, Guizhou and Shaanxi, and selected 53 local volunteers who have provided services to 2,652 left-behind elderly in 19 towns.

"Selected social workers all grew up in villages they serve, enjoying a good reputation, which contributes to smooth communication between the two sides," Zhong said.

"To make the work sustainable, we pay volunteers a competitive salary after discussing it with local authorities," she added.

The program had raised more than 4.7 million yuan at the end of last year through online charity platform Tencent Charity, which is mainly used for the salaries of volunteers, gifts for the aged, and funds for holding activities.

China is home to about 240 million people aged 60 or above, and the proportion of rural left-behind elderly has been rising with younger family members working in cities.

The country issued a document last year to require better social care for left-behind elderly people in rural areas. China had more than 144,600 nursing institutions as of September 2017, three times that at the end of 2012, according to the Ministry of Civil Affairs.

"Home-based elderly service is a multi-win measure which can supplement the government policy, help youth care the aged at home, provide job opportunities in the village and provide company for the lonely elderly to enrich their lives," Zhong Tiehua said.

Li Liping is proud of his work. "Most of the elderly left behind are lonely. I'm happy that we are making a difference," he said.