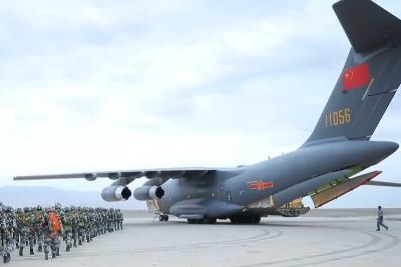 A heavy aerial delivery is a major criterion for assessing the capability to conduct airborne operations. Y-20's success means China's airborne troops have possessed strong mobility and are capable of launching a large-scale assault with heavy weapons on the plateau.

Footage released by CCTV's national defense military channel showed that, during real combat training on the plateau, the Y-20 airdropped a number of pieces of heavy equipment in succession.

After the equipment -- 107 mm multiple rocket launchers -- landed safely, paratroopers jumped from the jet. After reaching a predetermined landing area, they quickly located and manipulated the equipment to assault the enemy's forward position.

With a maximum range of 8 kilometers, 107 mm multiple rocket launchers are an important support weapon for quick response forces such as airborne troops.

This is only one of the many firsts the transport jet has achieved this year.

In February, six Y-20 transport aircraft were deployed by the PLA Air Force to carry medical supplies to Wuhan, which marked its first nonwar military operation.

In April, the aircraft carried out its first overseas mission - transporting medical supplies and three teams of experts to Pakistan, Myanmar and Laos.

"Beijing is about 6,000 km away from Moscow as the crow flies. This is the farthest overseas flight the Y-20 has made and has tested the aircraft's long-range capability," said Han Dong, a military expert.

Military aviation expert Fu Qianshao believes the Y-20 has gained experience in handling complicated situations after multiple real combat drills and that it will play a more pivotal role in the PLA Air Force's transport.

The Y-20, which began to be delivered to the PLA Air Force in July 2016, is one of the world's largest strategic heavy-lift transport jets, and has a maximum takeoff weight of around 200 metric tons.