While the industry quickly develops in Southwest China, tough competition, stricter regulations appear on the horizon 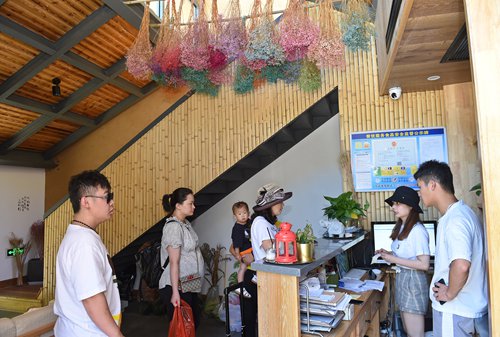 The homestay industry is developing fast in China, particularly in certain cities in the southwestern region. Meanwhile, however, problems such as vicious competition and complaints from property owners have also emerged. Experts have called for the rollout of government regulations to standardize and regulate the "barbarously growing" industry.

A tide of anti-homestay accommodation sentiment is currently on the rise, particularly in Southwest China's Sichuan Province and Chongqing Municipality, where the guesthouse industry has been developing at a particularly fast speed.

Such a mood is coming not only  from local governments, but also from property owners and the hotel industry.

On July 31, a police station in Sichuan's capital Chengdu issued a notice saying that seven homestay hotels in a residential neighborhood will be closed down, as the operators had illegally converted residential apartments into commercial businesses.

A report by the Beijing-based Worker's Daily noted on Tuesday that in Kunming, capital of Southwest China's Yunnan Province, homestay hotels are also often clustered in residential neighborhoods, which has prompted other residents to protest.

This resistance began when the homestay industry underwent an outbreak period a few years ago, both in China and abroad.

Wang Yan, a Chengdu resident who also runs a gourmet public account on WeChat, recently dived into the homestay market as she is optimistic about the future of the industry.

In March, she began renting out four of her personal properties in Chengdu on popular online short-term apartment renting platforms, including Airbnb, xiaozhu.com and tujia.com.

"It has become an industry consensus that Chengdu is the hottest domestic city for the homestay industry," Wang said.

"I feel that the homestay market has been quite active and it is likely to become a very hot industry in the future. So I am willing to invest [in the sector]."

The homestay sector in Chengdu has developed particularly fast over the past few years.

In just two years, from 2015 to 2017, the number of homestay hotels in Chengdu surged to 10,000 from 800, domestic leading tech site TMTPost reported on Monday.

A report published by Chengdu-based thecover.cn in July also noted that in a high-end residential neighborhood, which hosts about 600 inhabitants, near Chengdu's downtown area of Taiguli, nearly 100 homestay hotels are in operation.

As of the end of July this year, about 5 million apartments were available for renting on Airbnb globally, while more than 10 million Chinese customers had rented homestays on the website, according to media reports.

Li Na, a partner of YF Capital, was quoted by TMTPost as saying that although market demands have been relatively high in the sector, the industry is not that easy to enter.

"I don't think renting websites operators or homestay owners should be wildly optimistic about the future of the homestay industry. They should also watch out for possible problems during such barbarous development," Li said.

For players in the industry, they have already sensed chaos, with vicious competition posing as one of the main problems.

According to Wang, during a marketing campaign organized by tujia.com in June, her apartments were repeatedly given very negative feedback by one user.

Wang later found out that the user was actually another homestay owner who had deliberately given her bad feedback to damage her reputation and later wouldn't communicate with her properly.

Wang said that she had reported such malicious acts to tujia.com but that the site told her that it would not interfere in any business operation.

Apart from vicious competition, the external environment for homestay operation is also worsening in Chengdu. And in Wang's neighborhood, the relations between homestay operators and property owners are also deteriorating.

Wang also noted that now, more and more neighborhoods are becoming intolerant of the misbehavior of homestay customers and the rapid expansion of the urban homestay arena, with some property owners even considering using the local mayor hotline to express their discontent.

"It takes some time for the industry to become more standardized, and I do wish relevant management policies will be launched soon," Wang said.

In Japan, for example, a law on homestay hotel operation was implemented in June, which set the upper limit for homestay operators' yearly business hours. The new law has caused the number of Japan's homestay hotels to shrink by more than 80 percent compared with before the launch of the new regulations.

The homestay hotel business in China will surely face increasingly stricter regulations, which may slow down the industry's development in the short run, experts including Chen Chi, CEO of xiaozhu.com, were quoted as saying in the TMTPost report.

But Chen noted that he is not worried about the future of the shared accommodation business or homestay hotels in China.

The launch of management policies and stipulation of industrial regulations would be beneficial for the industry's future development, said Chen. "The shared economy is a new model that has challenged the existing business format. It needs legal supervision from the government [for guidance]."

Liu Weijun, a professor at the cyber safety and legal management coordination innovation center under the Chinese National Police University, said that industrial employees and relevant authorities should have risk control awareness, adding that advanced technologies should be applied to further enhance the safety of customers, house owners as well as platform data.