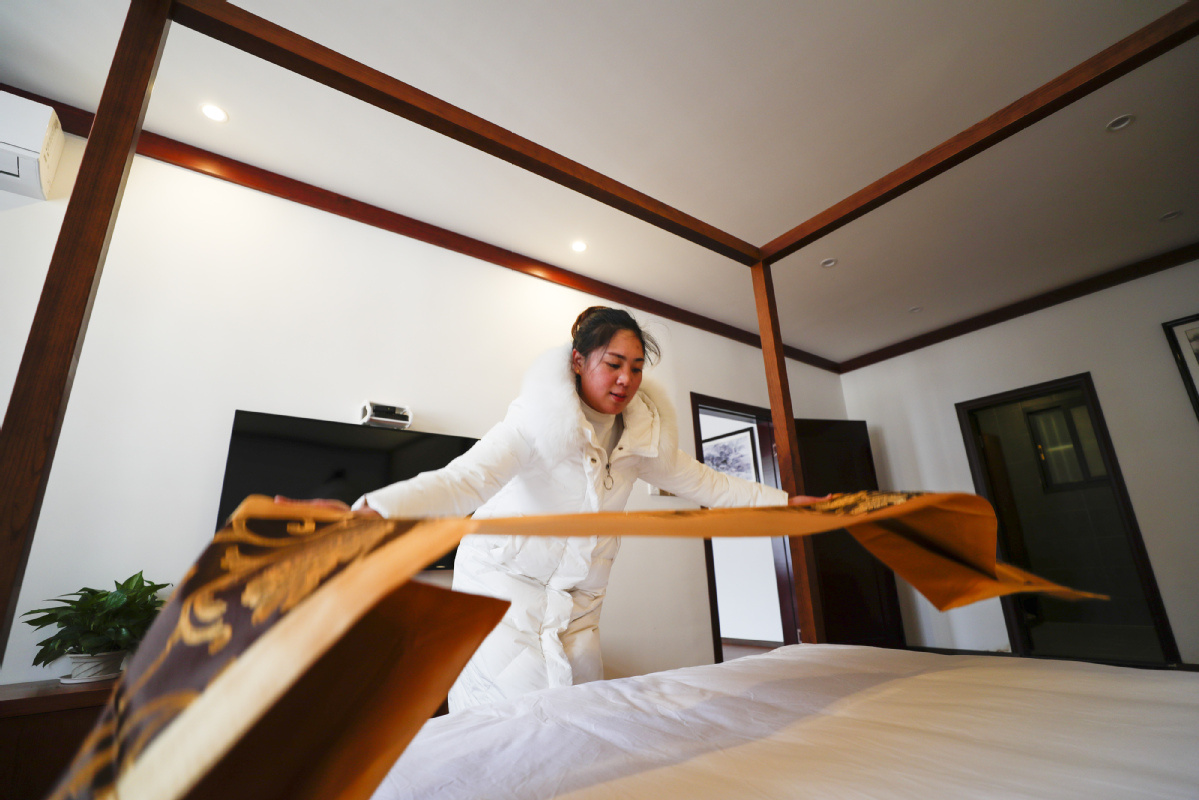 An employee readies a bed at a homestay in Chongqing on Jan 30. (Photo: Xinhua)

The short-term rental and homestay service sector is recovering from the novel coronavirus outbreak as the number of searches and reservations for domestic listings for the upcoming Labor Day holiday via shared accommodation platforms has surged after the contagion comes under increasing control in China.

United States-based home-sharing service provider Airbnb China is bullish on the prospects of the travel and short-term rental sector. As China's economy begins to recover from the COVID-19 outbreak, people's willingness to travel is also increasing.

"Travel is one of the most resilient industries in the world," said Peng Tao, president of Airbnb China, adding that the company has seen vigorous growth in short-haul trips in the domestic market, which may be the first types of trips to recover.

"Airbnb is built on trust and community. We must continue demonstrating the strength of the community during the crisis and take the lead to help boost the tourism sector. After getting through the outbreak, I truly believe people-to-people connections that power our community will be stronger than ever before," Peng said.

According to a recent survey conducted by Airbnb China, Chinese hosts are confident about the future of short-term rentals, with some 99 percent of hosts saying they feel positive or neutral about engaging in short-term rentals after the outbreak. Among hosts with positive attitudes, 72 percent said they would either maintain or increase their Airbnb hosting activity.

Moreover, nearly 60 percent of Airbnb China hosts said they were willing to accept more weekly and monthly rentals. The company continues to offer an incredible value proposition to China as the country recovers from the health emergency.

It is rolling out a series of new initiatives to help local communities recover from the epidemic. Peng said that in order to ease immediate cash-flow pressure on hosts, it is introducing an early payout program.

For eligible reservations, Airbnb will advance 50 percent of the actual amount payable to eligible hosts, helping them generate cash up to two months ahead compared to the original payout schedule.

It is launching a "spring recovery campaign" that features room listing recommendations and short-haul suggestions, and a "rest assured stays program" to promote listings with high-level cleanliness and sanitization standards.

According to the State Information Center, a government think tank, revenue of the home-sharing services industry reached 22.5 billion yuan ($3.2 billion) last year, an increase of 36 percent year-on-year. It is forecast that in 2020, the number of tenants is likely to exceed 100 million and the number of shared homes will exceed 6 million.

A recent analysis of Airbnb host income and guest spending on the Chinese mainland found that the combined activity generated $3.6 billion in 2019, a 61 percent increase over 2018.

Since the beginning of the outbreak, Airbnb China rolled out several measures designed to help local hosts deal with financial losses due to cancellations. It launched several online training programs that have reached at least 10,000 people and helped hosts build resilience and learn practical skills that can be applied during the outbreak.

Tujia.com said reservations for short-term rentals have already seen a peak for the Labor Day holidays, with 45 percent of travelers saying they are willing to travel with friends or partners when the epidemic ends, and 40 percent choosing short-haul trips.

"There is no doubt that pent-up travel demand from Chinese tourists will be released as soon as possible," said Han Mengying, an analyst from market consultancy Analysis, adding that compared with hotels, the recovery of the vacation rental market is slower due to its nonstandardized management method.

Han said another uncertainty lies with hosts, who may face a shortage of funds and exit from the industry due to the epidemic.