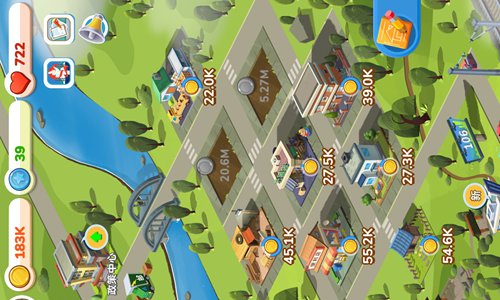 Young Chinese are obsessed with a competitive online city-construction game to commemorate the 70th anniversary of the founding of the People's Republic of China, that allows players to learn about their hometown's development and national policies.

The game, jointly developed by the People's Daily, the flagship newspaper of the Communist Party of China, and China's tech giant Tencent, was released on Tuesday to promote patriotism, the People's Daily said.

Players first choose their home city then join the construction of the city - building houses and running businesses, which can earn virtual income for the players.

Each player's income will be converted into the province's total score and serves as the base for the ranking among different provinces.

The conversion ratio varies due to different businesses, according to players reached by the Global Times.

Real estate, although the most profitable industry for players, contributes little to the city, while trade, manufacturing and service industries contribute more, a player surnamed Zhong, 24, told the Global Times. His hometown is Shangrao, East China's Jiangxi Province.

As of press time, South China's Guangdong Province and East China's Jiangsu were the top two, which coincides with the top two on the GDP list of Chinese provinces in 2018.

The Global Times found that, on the game's highest level, joining the credit system can increase incomes by as much as 180 times.

About 300 cards that show the beautiful urban scenery and unique regional culture of modern China will also be unlocked one by one as the total score of all the players reaches a certain figure.

Chinese netizens, especially young people, have been addicted to the game.

"More animated residents and cars will appear in the city once I complete a task in the game, which makes me feel proud as I contributed to the city's prosperity and understand the difficulties of building a country," a Beijing-based player, 22, who requested anonymity, told the Global Times on Saturday.

The game app topped the free game ranking on Apple's App Store, and its Android version has been downloaded 398,592 times as of press time, according to Chinese application data analysis website qimai.cn.