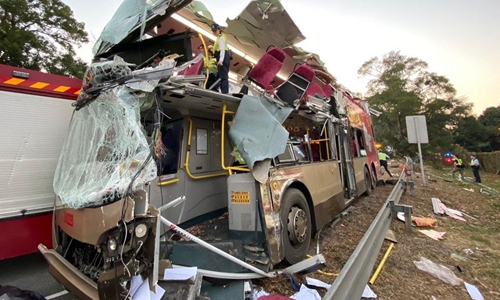 Photo taken on Dec. 18, 2019 shows the wreckage of a bus which crashed into a tree killing at least 6 people and injuring over 30 in Hong Kong, China. (Photo: Xinhua)

The bus driver involved in a crash that left six people dead on Wednesday along Hong Kong's Fanling Highway was charged with six counts of dangerous driving causing death.

The driver was denied bail on Friday by Fanling Court and the case was postponed to March for more evidence including results of the inspection over the bus and its driving recorder and autopsy reports.

At about 4:20 p.m. local time Wednesday, a bus driven by the 56-year-old defendant rammed into barriers and trees when traveling along Fanling Highway towards Sheung Shui, killing six people and injuring 39 others.

Eleven people were still at hospital for medical treatment, with one in critical condition.

Some families of the victims returned to the scene on Friday morning to make ritual offerings. Branches and fragments of the bus were piled up under the trees.

As several passengers were thrown out of the bus in the crash, a bus safety committee under the Transport Department will hold a meeting soon to review safety issues including stricter rules on wearing seat belts and improving the bus body design.