HONG KONG, Aug. 27 (Xinhua) -- As the new school term is approaching, a Hong Kong community group on Tuesday called on the public to pay attention to possible bullying cases in schools especially those targeting children of the police. 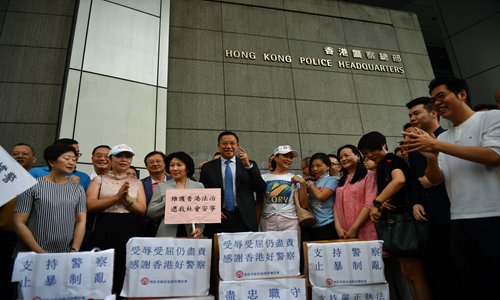 Safeguard Hong Kong, a community group formed by different sectors of the society, issued on Tuesday an open letter to all elementary and middle schools in Hong Kong, appealing to school principals to take effective measures, step up school management and education, and stop any form of school bullying.

The letter mentioned that the recent unrest in Hong Kong has caused serious social division, and some people try to bring these confrontations into schools and even target children of police officers. Some people disclosed the personal data of these children on the internet, claiming they will do something harmful to these children.

The letter also noted that a small number of students who had participated in illegal protests claimed that they will boycott classes, and they may isolate, tease and even bully other students who do not share the same stance.

Safeguard Hong Kong said that elementary and middle school students are in their formative years, and school bullying will cause serious negative impacts on them.

Kong Wing-cheung, senior superintendent of police public relations branch, told a press briefing Tuesday that the police is very concerned about the personal data of police officers and their families being leaked.

"All parents care about their children and I don't understand why some people are trying to harm the children of police officers," said Kong, adding that the police expected the education sector to provide students with a safe school environment.

According to the police, a total of 883 people were arrested in illegal protests since June, with 15 of them aged below 16.