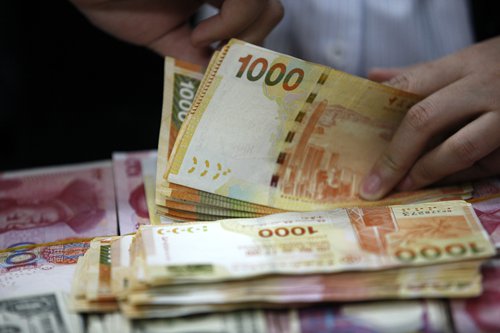 The Hong Kong dollar has firmed again, after a continuous plunge against the US dollar in recent weeks that triggered some market alarm and, eventually, government reaction to defend the currency.

By 6:00 pm Beijing time on Wednesday, the Hong Kong dollar had corrected a little, weakening by 0.014 percent to stand at 7.8470 against the US dollar.

The bouncing Hong Kong dollar has given some kind of relief to the market, which has been worrying about possibilities of a large-scale shorting of the Hong Kong dollar like what happened in 1997, when the currency came under speculative pressure, and whether such activities might trigger a financial crisis in Hong Kong in the future.

"When the HKMA intervened by buying Hong Kong dollars from banks, the aggregate balance and thus the Hong Kong dollar liquidity were reduced and interbank rates rose," she told the Global Times on Tuesday.

Xi Junyang, a finance professor at the Shanghai University of Finance and Economics, said the fact that there has been no evident deterioration of real economy sectors in Hong Kong has also saved the currency from a deep and long-lasting plunge.

The HKMA has disclosed to the media that it bought HK$51 billion of its own currency 13 times from April 12 to 19, a move in accordance with the current linked exchange rate system which Hong Kong has been using since 1983.

Under this system, the Hong Kong dollar is pegged at 7.8 to the US dollar, but can trade between 7.75 and 7.85. The HKMA must intervene if trading hits either end of the band.

According to a statement the HKMA sent to the Global Times on Monday, the Hong Kong dollar's exchange rate touched the weak side (7.85) on April 12, prompting the authority to buy Hong Kong dollars immediately.

Norman T. L. Chan, chief executive of the HKMA, noted in the statement that the HKMA might take such moves again in the future.

"The HKMA is fully capable of... managing large-scale capital flows. There is no need to be concerned," he said.

The Hong Kong dollar had not touched the weak side since 2005.

"With ample liquidity... the rise in Hong Kong interbank rates has fallen behind the US interbank rate rise, and with the current linked exchange rate system and a free capital market, any interest differential will lead to currency arbitrage," Liao told the Global Times.

Alarm bells also went off recently as the gap between HIBOR and LIBOR narrowed, which shrank the currency's arbitrage space. On Monday, the overnight LIBOR and HIBOR stood at 1.7031 percent and 0.1500 percent, respectively. In comparison, on April 12, the overnight LIBOR and HIBOR reached 1.7031 percent and 0.0593 percent, respectively.

According to Liao, the Hong Kong dollar's liquidity has been ample due to strong capital inflows over the past few years, which have caused Hong Kong banks to be reluctant to raise interest rates while the US has repeatedly raised rates.

She also mentioned that behind the strong liquid ity is the "sustained capital inflows" of the stock connect program between the Chinese mainland and Hong Kong, as the south-bound balance is much larger than the north-bound balance.

Cheng Shi, head of international research at the Industrial and Commercial Bank of China, said it takes some time to solve the problem of over-surplus within Hong Kong's currency supplies.

"Against the backdrop of speeding US dollar interest rate hikes, I predict the Hong Kong dollar might turn down again in the near future," he told the Global Times on Tuesday.

Xi said that with the further increase of the US dollar's interest rate, the HKMA must follow with similar moves to offset any possible influence.

"Also, if anything serious takes place, mainland foreign currency is a backing," he noted.

A Hong Kong stock analyst at TF Securities said that with Hong Kong's ample reserves, it's unlikely that it will need to resort to the mainland to cope with such a situation. He also said that currently, the Hong Kong dollar almost "has no linkage" with the yuan, he told the Global Times on Wednesday on the condition of anonymity.

Xi also said that in the long run, the Hong Kong dollar must de-peg from the US dollar and peg with the yuan, as Hong Kong and the mainland's economic ties grow increasingly tighter.

"Eventually, the Hong Kong dollar might evolve into a system that pegs both the yuan and the US dollar, or it will peg a basket of currencies entering a pluralistic model," Cheng commented.

"For Hong Kong, a weak currency could provide support to its retail sector and boost exports," she noted.

But Cheng said that the spreading of short-term interest rates would have a very limited impact on such things like tourism and trade.

The Global Times consulted several Hong Kong residents on Monday and Tuesday. None of them said they have witnessed any significant economic changes like a boost in tourism in Hong Kong in recent days.

But with regard to the future, the experts the Global Times spoke to said they can't remain completely calm.

"When HIBOR eventually catches up with LIBOR, it will affect Hong Kong's investment via higher borrowing rates and housing market via higher mortgages," Liao said. "We are more concerned about the interest rate rise."