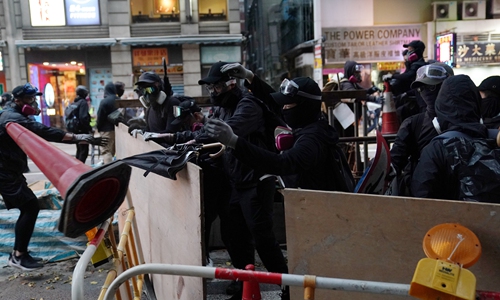 Rioters set up barricades on streets to block traffic in Hong Kong on Jan. 1, 2020. (Photo: Xinhua)

Many of the most radical Hong Kong rioters have announced they are giving up violence, indicating that what observers called the "black terror movement" has died down as the opposition camp shifts focus toward elections in September.

Members of the "Torch Squad," a group infamous for making and hurling Molotov cocktails, announced they have disbanded, a sign that the frontline fight has been in decline, media reported on Tuesday.

A member posted on social media, "Sorry, I now will see myself out," while complaining that a so-called "ghost busting" operation within the "frontline fighters" had undermined unity and the fighting had tired everyone.

"Ghost busting" refers to the protesters' efforts to reveal plain-clothes police officers in their groups.

A Hong Kong-based source close to the matter told the Global Times on Wednesday that there were fewer frontline radicals as the police have arrested 7,000 people.

He asserted the undercover police strategy led to radicals being sentenced and created a deterrent.

Details of the rioters' criminal acts will be further exposed in court, and consequently the public will become more aware of their misconduct, Leung wrote.

He predicted more rioters "would beg for mercy from the court," which will "deal a heavy blow to the morale of the black terror."

More members of radical groups would witness against other members and cause greater suspicion within the group, Leung noted.

Chan told the Global Times that in the first phase, "rioters from different splinters" wanted to increase their political voice after the unrest started in June.

In the latest development, conflicts and fights would gradually switch to parliament as decreasing violence would benefit the pan-democracy camp at the Hong Kong Legislative Council election in the fall of 2020, the "next targets of rioters."

Li Xiaobing, an analyst on Hong Kong, Macao, and Taiwan affairs at Nankai University in Tianjin, told the Global Times that the purposes and measures of rioters were "all unjustifiable and unfavorable for residents," and could not last long.

Most of the radical rioters were "benefit-oriented so they collapse when internal interests are unevenly distributed," Li said.

A majority of residents long for the seven months of unrest to end, Li noted, and peace to return to the world financial center.

With the support of the public, since the launch of the Hong Kong Police Anti-Violence Hotline on October 8, 2019, the police have received more than 800,000 messages from concerned citizens regarding the illegal acts of rioters, for further investigation.