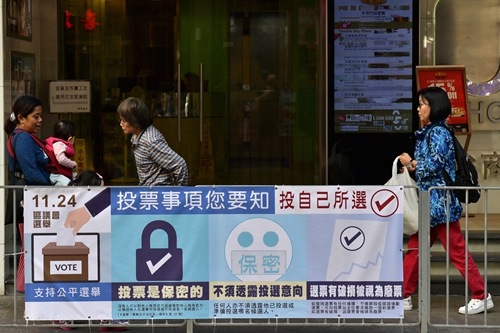 Pedestrians walk past a banner for Hong Kong's district elections, scheduled to take place on November 24, in the city's Wanchai district on Friday. (Photo: AFP)

Hong Kong society is going to all lengths for Sunday's district elections, although uncertainty still looms large over voters' safety and the city's future amid violence.

On Sunday, Hong Kong voters will go to the more than 600 polling stations to elect 452 district councillors for 18 districts.

The polls are being held in the middle of "black terror" caused by a social unrest that has run into its sixth month, and many hold high expectations that the election can help end the ongoing violence that has rocked the city.

Victor Chan Chi-ho, vice chairman of the Hong Kong Association of Young Commentators, is a pro-establishment candidate from the Tak Ming constituency of Sai Kung. Chan said candidates of the pro-establishment camp face severe personal safety problems, which has affected their election campaigns, but he remains confident.

"At a time when our society is so divided, district elections are an important channel for citizens to peacefully voice their opinions. I hope a smooth election will help ease the tense political situation," Chan told the Global Times on Friday.

Almost all of the 31,000-strong Hong Kong Police Force has to report for duty on Sunday, and the police will be on "maximum reserve" mode to stop any disruptions or violence but maintain a "minimum presence," according to local media reports.

Chris Tang Ping-keung, the new police commissioner, told a media briefing on Friday that the police will secure polling stations so citizens can vote without disturbance.

"We have taken enough precautionary measures," Tang said, calling on certain people not to commit violent or inappropriate acts that will disrupt the voting process, "or they will be in opposition to 7 million people in Hong Kong."

The wife of a police officer told the Global Times on condition of anonymity that her husband will patrol the Kwun Tong area, and have received intelligence that some people would prevent others from voting, but the numbers will be small.

In previous elections, at least two police officers were assigned to each polling station. But more are expected to be deployed this time, according to a frontline police officer, adding that they are still waiting for instructions from the senior level.

The latter half of this week has been relatively calm as police have besieged the Polytechnic University and arrested hundreds of rioters.

All sides hope the elections can be held on time. Chief Secretary Matthew Cheung Kin-chung on Thursday reiterated the government's determination to hold the elections in a fair and orderly manner.

"Once any extreme or violent incident occurs that people with different political views cannot campaign or vote safely, the government should consider postponing the elections," barrister and legislator Priscilla Leung Mei-fun told the Global Times on Thursday.

On Thursday, an off-duty police sergeant was slashed across face with a razor when he tried to detain an elderly man who was allegedly damaging an election banner in Sheung Shui.

The banner reportedly belonged to district councillor Liu Hing-hung of the pro-establishment Democratic Alliance for the Betterment and Progress of Hong Kong (DAB). He is running as an incumbent in the Fung Tsui constituency against independent pan-democrat Chiang Man-ching.

Both camps have held campaign rallies in the past few days. The DAB, which is fielding 181 candidates, held a rally on Thursday in Tamar Park and called on Hongkongers to unite and vote to save Hong Kong from violence.

Among the more than 1,000 candidates, about 320 are from pro-establishment parties, more than 390 people are from pan-democratic groups, more than 370 non-partisan candidates claim to be "independent," and other candidates did not provide their political background.

Pro-establishment and pan-democrats have held campaign rallies in the past few days. The DAB, which is fielding 181 candidates, held a rally on Thursday in Tamar Park and called on Hongkongers to unite and vote to save Hong Kong from violence.

Crystal Chu, who is in charge of the patriotic Hong Kong Alliance Association, told the Global Times on Friday that she is a supporter of the pro-establishment camp and that she and her association have been assisting community volunteers.

"We support councillors who love the country, love Hong Kong and love peace. We call on all registered voters, especially those from the blue camp (anti-protests), to not fear violence and use their ballots to safeguard the stability and prosperity of Hong Kong and vote for councillors who adopt a down-to-earth attitude to work for the people," Chu said.

Calvin Kwan, a man in his 30s who works in the services sector, told the Global Times the pan-democrats or the opposition camp might have claimed a big victory if the elections were held one or two months ago, but continuous violence and assaults on ordinary people show that these politicians did not do anything to maintain social order and the rule of law.

"Therefore, I will not vote for pan-democrats," Kwan said.

In the past few months, the offices of some pro-establishment politicians were smashed and burned, and the politicians even received threats from protesters.

Regina Ip Lau Suk-yee, a legislator and chairperson of the pro-establishment New People's Party, said the upcoming district elections have been totally politicized, as people's livelihoods are not on the agenda of many candidates and some from the opposition even have no programs.

She noted that although secessionist Joshua Wong was disqualified from entering the election in the South Horizons West constituency, he found Kelvin Lam as his replacement.

"Lam has no experience working in the community, but he is a representative of Wong. That's enough," said Ip in an earlier interview with the Global Times.

"If more than 100 violence supporters are elected to district councils, it will create unbearable consequences to the governance of the Hong Kong government in the future," Ip said, adding that the opposition may make trouble to the whole team of the government, including executive council members, and create a mess for next year's legislative election.

Hao Shinan, a lecturer of comparative politics at Shanghai International Studies University, who observes Hong Kong affairs, said the pro-establishment camp should hold firm its position by condemning violence and supporting the legislation of Article 23 of the Basic Law, and engage with more young people to alter the traditional image of pro-establishment figures.