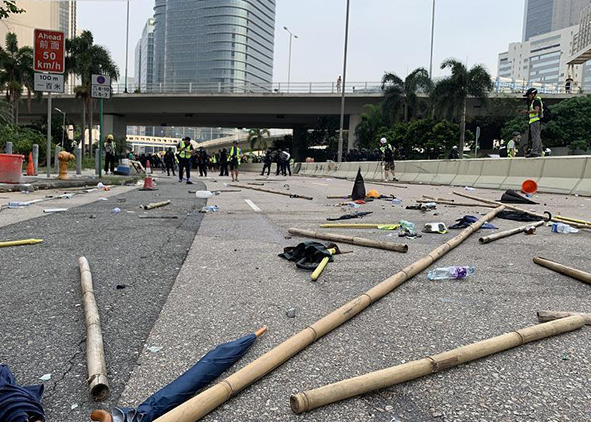 A spokesperson for China's Hong Kong Special Administrative Region (SAR) said that police had approved an anti-extradition bill march in Kowloon Bay Saturday at the request of protesters but that things went awry when protesters deviated from the original route.

Police earlier issued a "Notice of No Objection" to allow the march to take place, however, it turned violent when some protesters set up barriers and roadblocks on streets in eastern Kowloon Bay.

During the protest, some demonstrators clashed with police and attacked officers with petrol bombs and bricks. Arson and vandalism were also witnessed on the scene.

The Lands Department has since clarified that smart lamp posts only measure traffic conditions, weather and other data and the function of the devices is limited to sending out the posts' locations to mobile phones as part of Hong Kong’s smart city initiative.

The lamp posts do not have the capability to collect users' information or to initiate face recognition. The department said it is ridiculous that protesters ignored the facts and damaged the posts with total disregard for public property.

The HK SAR government has strongly condemned protesters for their acts of sabotage and violence and it said police will fully investigate all illegal actions.

The government has also called for an end to the violent actions and for a return to an orderly Hong Kong society as soon as possible.