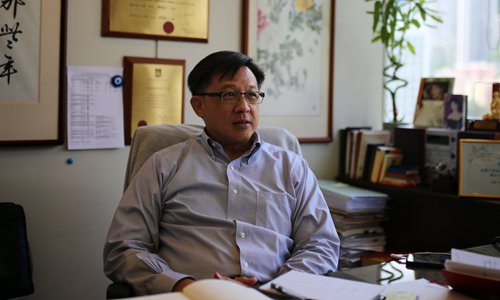 If Hong Kong gets out of control, then the People's Liberation Army will be needed to bring back social order, Junius Ho Kwan-yiu, a pro-establishment legislator of the Hong Kong Special Administrative Region (HKSAR) said in an exclusive interview with the Global Times on Thursday.

Ho, a Hong Kong legislator and former president of the Hong Kong Law Society, was filmed on Sunday night shaking hands with men in white clothes who had been in a physical conflict with radical protesters in Yuen Long.

Ho declared he was just greeting acquaintances, but his opponents hyped the handshakes as evidence that the pro-establishment legislator was colluding with gangsters.

Ho explained that he showed up in Yuen Long Sunday night as he was seeing off a friend and also to deal with some legal consulting.

Ho said many residents in Yuen Long know him as he is legislator for New Territories West - which includes Yuen Long - and so it's normal for him to be greeted in this area.

"I know they [people in white] intended to prevent people in black clothes [radical protesters] from making trouble. They prioritize defense," said Ho.

The people wearing black started it, Ho said. Violence is wrong, but the opposition force cannot pass all the buck to others, he said.

Ho's life has been disrupted since the video of him shaking hands with men in white went viral. His office address, telephone number, the information of his son, and even the location of his parents' tombs were published online.

He receives hundreds of crank calls every day.

Vandals desecrated the tombstones of his parents' graves on Tuesday afternoon. Thirty-nine pro-establishment legislators issued a joint statement on the same day, condemning the evil behavior, according to Hong Kong-based Wen Wei Po.

The attack on Ho sends a clear message that whoever speaks for the government will be silenced, said Ho, but adding that vandals' behavior are doomed and justice will serve itself.

Some Hong Kong local media have ignored the harassment of Ho and instead focused on the Yuen Long violence.

"Some Hong Kong media are mute," said Ho, noting that all they care about is whether the police colluded with people in white and why police failed to arrive at the scene in a short time after the clashes on Sunday.

That night the police received 24,000 calls in three hours and internet users also urged people to call the police at the same time.

After the Yuen Long incident, Western countries "paid their attention," said Ho, saying that it was no surprise to him that anti-China groups in those countries have close connections with Hong Kong's opposition forces.

Ho mentioned that in May, before the protest broke out against the extradition bill, he was invited to dine with British Ambassador to China Barbara Woodward, along with another pro-establishment legislator and four legislators from the opposition.

Ho said he learned that the dinner was aimed at persuading them to give up their stance and support the opposition.

US interference in Hong Kong has been obvious since February, Ho said. The interference has bred problems in the region and disturbed residents.

People from anti-government organizations are also from many walks of Hong Kong's society. They want to separate Hong Kong from the motherland, said Ho, "which is intolerable."

Once the situation in Hong Kong gets out of control, the law allows the People's Liberation Army's Hong Kong Garrison to shoulder the responsibility of restoring social order, Ho said.

But first of all, the regional government and police forces should try to stop the violence, he noted.

Born and raised in a New Territories village, Ho said people in this area have a strong sense of family and respect their ancestors.

"However, we saw some surprising changes in Hong Kong society. So many young people forgot their roots and ancestors, disagree with their identity as a Chinese. Some even don't have a basic moral sense."

Ho said he was open to discussion with people who hold different opinions, but desecrating his parents' tombstones was "not good."

"I think the two sides should stop, show some respect and understanding for each other like the way a Chinese should behave," he said.