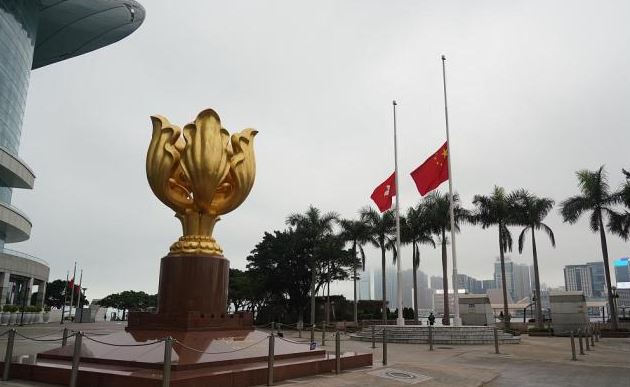 The Chinese national flag and the regional flag of the Hong Kong Special Administrative Region are flown at half-staff as a token of mourning at the Golden Bauhinia Square in Hong Kong Island to express condolence for the martyrs and compatriots who died in the COVID-19 outbreak. (Photo: China Plus)

Various commemoration activities were held in Hong Kong to express deep condolence for the decrease.

At 8:00 a.m. local time, national flag and regional flag were flown at half-staff as a token of mourning at the headquarters of HKSAR government and the Golden Bauhinia Square in Hong Kong Island.

"I believe we can win the battle against the virus and embrace a new spring," said a Hong Kong youth surnamed Cheung who came to pay a silent tribute at the Golden Bauhinia Square. He had been following reports about the development of the COVID-19 outbreak for a long time.

Among those attendees, Ji Lu stood in silence. She was a primary school teacher who went to Hong Kong through an exchange visit last year from Wuhan in central China's Hubei Province.

"We'll always remember those who died in the fight against the virus. Wuhan will win the battle and get better, and China will grow stronger," said Ji.

At around 9:00 a.m. local time, Jimmy Tso and his three friends stood before the Cenotaph at Central, holding national flags, regional flags and a placard with characters "Deep condolence for martyrs and compatriots who died in COVID-19 outbreak."

"It's also our Chinese traditional Tomb-sweeping Day today. We shall pay tribute for the deceased and not forget our loved ones," said Tso.