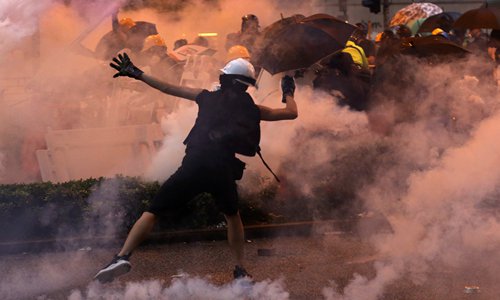 The education system in Hong Kong is also misleading the youth by discouraging them from identifying themselves as Chinese, Lun told the Global Times.
"There is no patriotic education in Hong Kong, and Chinese history is not included as a separate curriculum, so students only learn a little bit of Chinese history," Lun said.
It would be no use even if there was patriotic education, as most teachers dislike the mainland due to influence of online fake news, and they convey this idea to their students, Lun explained.
During British rule in Hong Kong, the region's local history was rarely covered in textbooks, while only its history under British governance was presented. Links between Hong Kong and the Chinese mainland were deliberately cut in Hong Kong's primary and secondary education system, Zhang Lingyun, a senior reporter for Phoenix TV in Hong Kong, wrote in a personal observation piece.
The British imposed strict controls on education in Hong Kong and banned political activities in schools. After the signing of the Sino-British joint declaration in 1984, the British authorities realized that their era was about to end. They then attempted to accelerate civic education in Hong Kong, and started to infuse political ideologies such as democracy, freedom, equality and human rights into local education just a few years before its return, according to Zhang.
The British cultivated an obedient civic mindset during their colonial rule, and preached democracy and human rights through legislation and education when they were ready to withdraw, Zhang concluded.
She is also the mother of a middle school student in Hong Kong.
Meanwhile, the influence of education groups backed by anti-mainland opposition is overwhelming.
Such groups represented by the Hong Kong Federation of Education Workers are also politically powerful and provocative, she observed.
In 2013, the federation supported the Occupy Central Movement and compiled education materials to induce young students to participate in the illegal occupation. During the current anti-extradition bill protest, it repeatedly produced a biased revised textbook covering the bill issue for its member teachers to use, and also called on secondary school teachers to hold a strike against the bill, according to Zhang.
It is easy for influenced teachers to drum their ideas into their students' minds, leaving those who disagree with them marginalized, isolated, and even bullied, Zhang told the Global Times.
Tsang felt sorry for the secondary school students who were brought to the demonstrations by their teachers.
"How can these young children understand politics?" Tsang wondered.
"A high school student told me that they didn't want to attend the protest, but he was afraid of being bullied and excluded in class if he didn't go," Tsang said.
After entering university, students tend to be easily influenced by their radical peers, some of whom are active in the street movement in Hong Kong. They bring politics into the campus, inciting other students to boycott classes and even attack the principal and teachers, according to Zhang.
Blind opposition to the government has become increasingly prevalent and politically correct among Hong Kong's young people, she said.
Today's Hong Kong youth have grown up in an educational atmosphere filled with prejudiced political stances and Westernized ideologies, which is largely attributed to the absence of Chinese history and misrepresentation of protest in some local and Western media reports, experts suggest.