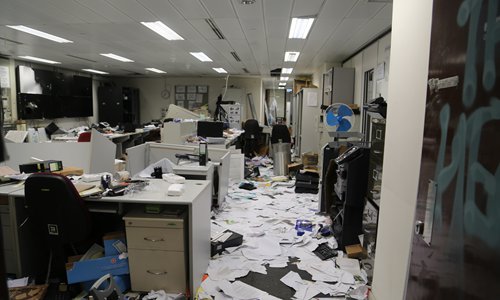 Photo taken on Wednesday shows government documents and files scattered on the floor at a LegCo office after radical protesters stormed the legislative building on July 1, 2019. (Photo: Global Times)

Hong Kong police resorted to force only on occasions of violence during last year's social unrest, while there were "areas for improvement" during officers' clashes with protesters, according to a report on public order events since June last year and the police response.

The 16-chapter 1,000-plus-page report, released by the city's Independent Police Complaints Council (IPCC), reviewed major incidents of public concern, including the July 21 attack in Yuen Long and the sealing-off at the Prince Edward station on August 31.

More than 120 pages were dedicated to the July 21 incident, in which a white-clad mob attacked protesters and the police arrived late. The incident led to allegations that police colluded with the attackers and triggered strong social sentiment against the police.

According to the report, the police did not process intelligence information or take action in a timely manner to restrain the white-clad individuals' behavior, but the investigation does not believe the police force colluded with them.

In response to police actions in the Prince Edward station on August 31, in which Hong Kong police allegedly indiscriminately attacked passengers during their arrests of protesters, the watchdog regards the decision as a correct choice to stop rioters from escaping as many changed clothes to disguise as general passengers.

It is necessary for police to take decisive action amid rioters' vandalism of metro stations, but communications with the firefighting department and life rescuers in a large operation likely to cause injuries were not smooth enough, according to the report.

The police acted slowly on both occasions in refuting rumors emerging afterward, the IPCC said.

IPCC also contended that violent protests were bringing Hong Kong to an era of terrorism.

Lawrence Ma, a barrister and chairman of the Hong Kong Legal Exchange Foundation, believes that the report is one of the most professionally compiled one.

"Rarely do you see a police watchdog report in the world this comprehensive, detailed, analytical, impartial, and professional," Ma told the Global Times.

Ma had been an IPCC member from 2010 to 2016 and experienced the Occupy Central movement. He said many complaints against police emerged after that 79-day event and a similar report then was not that detailed and comprehensive.

"This report has cleared Hong Kong Police of any alleged police brutality which was an international concern. Anyone now in the international community wanting to question the professional standards of the police should be satisfied that any such suspicion is groundless and they have to overcome the insurmountable task of discrediting this report first," Ma said.

Hong Kong Chief Executive Carrie Lam approved police actions at a press conference on Friday and reiterated that there is no need to set up an independent commission of inquiry to supervise police actions as demanded by protesters.

"The stance of the Hong Kong government has not changed and an independent commission of inquiry is not needed. The nature of protests has evolved, and protesters were using violence to coerce the government and weaken the police," said Lam, adding that the police has no political role but is only tasked with enforcing the law.

Lam noted that the release of the report did not mean an end to violent activities in Hong Kong. She called on people to say no to violence to safeguard Hongkongers' freedom and rights within the boundaries of law.

On Friday, a 22-year-old lifeguard was sentenced to four years in prison after he admitted crimes on May 4. The man was arrested on June 12, 2019 for assaulting police at LegCo and casting objects. Some 8,000 to 10,000 people surrounded the LegCo that day and the supposed peaceful protest showed premeditated use of violence.