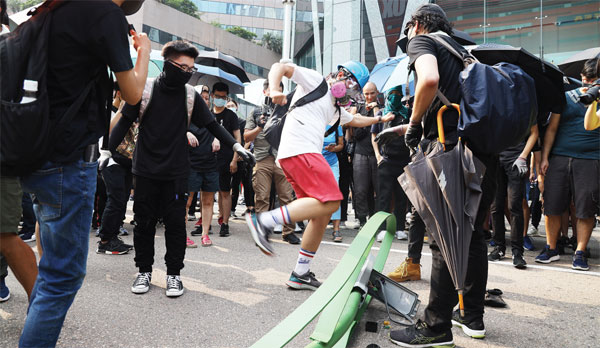 A radical protester kicks a smart lamppost that was pulled down on Saturday. China Daily

Kwok Pak-chung, regional commander of the Hong Kong Island, said at a daily press conference here on Thursday that the police have banned the application for a public meeting and public processions in Central and Western Districts on this Saturday, without naming the applicant.

"The objection is in the interest of public safety, public order, and protection of rights and freedom of other residents," Kwok said.

The police believe certain protesters will commit violent acts during the proposed gathering, Kwok said. "We have noticed a lot of online comments to propagate the use of extreme violence in the coming protests. Some even went to the extreme of promoting deadly violence."

Kwok said there is a very high chance that these proposed public events will be hijacked as radicals have indeed realized their extreme ideas into reality. "Police must take proactive step to prevent such violence."

New arrests have been made for offenses in protests over the last two months. Tse Chun-chung, chief superintendent of police public relations branch, said eight males were detained Wednesday, with seven of them involved in the besiegement of the Hong Kong Legislative Council, Police headquarters, or Hong Kong International Airport.

Tse also said personal privacy of 1,662 police officers and their family members have been leaked online since June and some even incited others to threaten and harass them, as well as use their information to illegally borrow money.

The police have arrested 19 related suspects, including four females, since July 2, Tse said.