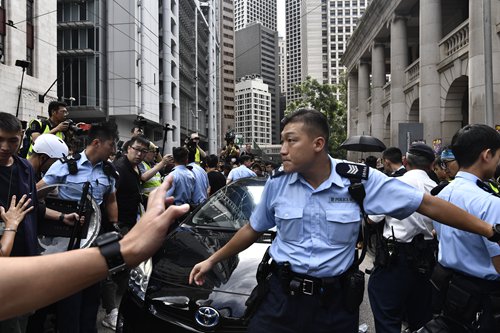 Police officers help a trapped car among protesters during a demonstration in Hong Kong on Sunday. (Photo: AFP)

On another day of illegal rallies in Hong Kong, police fired tear gas to disperse protesters who repeatedly ignored warnings and engaged in a standoff near the liaison office of the central government in Hong Kong on Sunday.

The unauthorized assembly also took place at other locations on Sunday including Causeway Bay and the Golden Bauhinia Square near the Hong Kong Convention and Exhibition Centre in Wan Chai.

According to the website of the Hong Kong Police Force, some protestors committed arson at various locations on Sunday, seriously threatening the safety of everyone.

About 3 pm Sunday, the protesters gathered at Chater Garden in the Central District as planned, but half an hour later they began marching west in defiance of a police order.

The police warned protesters not to deviate from the planned route as they walked along Queensway and Hennessey Road toward Wan Chai, obstructing traffic.

At the previously bustling tourist hub of Hennessey Road, the Global Times reporter saw that there were few tourists despite the stores being open.

As more protesters gathered, the traffic in front of the Sogo Department Store was completely obstructed.

The repeated tactic adopted by some radical protesters in Hong Kong is that when the sun goes down, some protesters begin to build barriers and wait for the police.

On Sunday evening, they adopted the same strategy in Causeway Bay and Sheung Wan. Protesters stopped near the liaison office.

After the standoff between the police and protesters for some time during which protesters hurling bottles and stones toward the police, the police began to gradually move forward.

"From using umbrellas and batons to throwing paint bombs and canisters, from making traffic obstructions to attacking the police, protesters are upgrading their violent means," Kennedy Wong Ying-ho, a Hong Kong lawyer and convener of Safeguard HK, Support the Surrender of Fugitive Offenders Legislation, told the Global Times.

The situation was escalating, Wong warned.

The Hong Kong police acted in accordance with regulations and in a restrained manner on Sunday, but about 8: 40 pm, protesters rushed out from an alley and threw bottles and bricks at the police.

After repeated warnings and constant provocations, the police started to disperse protestors by firing tear gas.

During the protest on July 21, protesters broke a police order and changed the route.

Radical rioters besieged the liaison office of the central government in Hong Kong and defaced the national emblem of China in the evening.

Sunday's standoff was a continuation of Saturday's when protesters took to the street in Yuen Long, which escalated into a standoff and clash with police.

Hong Kong police Thursday denied permission for a protest in Yuen Long on Saturday, citing possible violence which might threaten the safety of villagers and residents.

The demonstration was meant as revenge for the violence that took place at a subway station in Yuen Long on July 21.

Protesters provoked the police by throwing umbrellas and bottles, ramming barricades and cornering them at an intersection.

The mob tried to use barricades to push back the police who were outnumbered by the protesters. Eventually, the police used tear gas to disperse protesters.

The government said the police would take serious follow-up action with the violent protestors, according to the Xinhua News Agency.

Western media targeted the police and tried to smear their role in the Global Times reporter's opinion.

Western and Hong Kong media have blamed the police for their alleged brutality against protesters, but deliberately ignored protestors' violent provocation.

Police have also borne the pressure of residents who think they acted too slowly to protect public security.

A spokesperson for the Office of China's Foreign Ministry in Hong Kong on Sunday rebuked Engel's remarks, saying he was telling a slanderous "bare-faced lie."

"Anyone without prejudice will admit that Hong Kong police have exercised enormous restraint and shown their professionalism when dealing with violence and provocation by the mob," according to the spokesperson.

Wang Dan, an associate professor from the Faculty of Education, Hong Kong University, told the Global Times that there were not many precedents for Hong Kong police using tear gas, but objectively speaking in his opinion, they exercised great restraint.

"Most times during the protests, the police aimed to disperse them and guard their line of defense," said Wang.

"Compare that to what the police in the US, Canada, Australia and the UK did in the face of such situations, such as when Occupy Wall Street occurred - what the Hong Kong police did is much milder," according to Wang.

As the protestors clashed with police in Yuen Long on Saturday, Chinese mainland internet users took to social media to show their support for the police.

The protesters crossed the line, some netizens posted, and asked the police to show no leniency.