HONG KONG, Nov. 29 (Xinhua) -- The campus of the Hong Kong Polytechnic University (PolyU) has been handed over to school management as police have removed all dangerous goods after two days of operation. 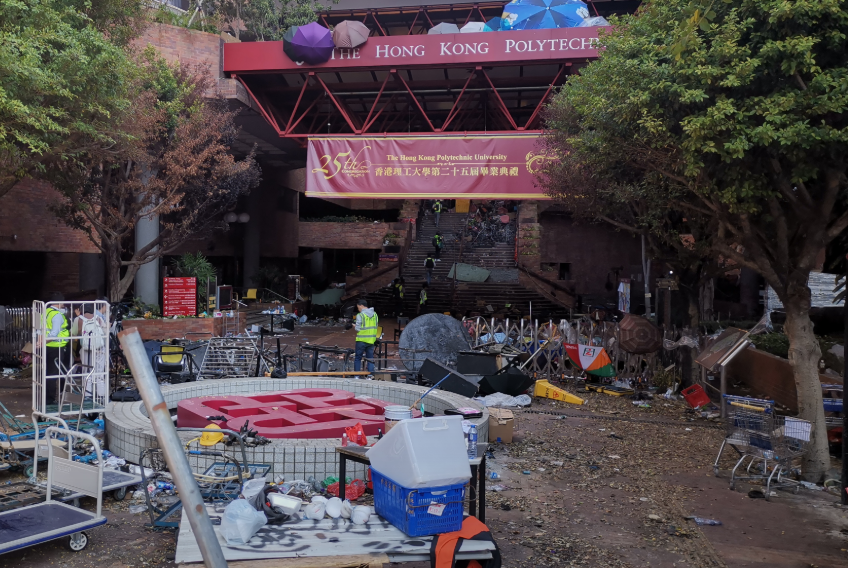 Police retreated on Friday noon and lifted their cordon around the campus, marking an end to the prolonged standoff that has lasted for more than 10 days.

During the past two days, police have seized 3,989 bottles of petrol bombs, 1,339 pieces of explosives, 601 bottles of corrosive liquids and 573 pieces of weapons, Chief Superintendent of Police Public Relations Branch Kwok Ka-chuen told a press briefing on Friday.

The number of petrol bombs seized by police recently, plus those found on campuses including the Chinese University of Hong Kong, has totaled more than 10,000. "The large number of hazardous articles could pose a major threat to public safety," Kwok said.

A safety team, consisting of officers of the Police Forces and the Fire Services Department, entered the PolyU on Thursday. The police stressed that they have all along been adopting a peaceful and flexible approach in handling the standoff at the PolyU.

During the past more than a week, rioters occupied the university and built it into a fortress against police. School facilities were damaged and laboratories were ransacked. Garbage was scattered all over the campus from canteens to medical centers. Police and passersby were fatally attacked.

Police have arrested 1,377 people during the standoff. Of all, 810 arrests were made when rioters left the campus.

Since June, a total of 5,890 people involved in violent incidents were arrested for various offenses including unlawful assembly and possession of offensive weapons. Meanwhile, 483 police officers were injured in operations.