Hong Kong police on Friday rejected false claims and malicious comments spread online accusing police of killing a female protester and disposing her body in the sea. They denounced such rumors as not only totally false but cruel and disrespectful for the family of the deceased. 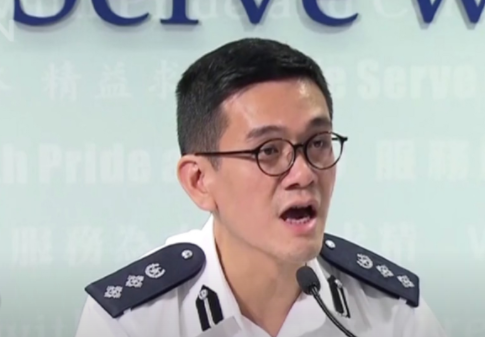 "We reject any attempt to discredit us," Senior Superintendent Kelvin Kong Wing-cheung told a regular press briefing, expressing regret about such irresponsible remarks that are slandering police and stirring up grievances in the society.

A total of 90 people have been arrested since the anti-mask law came into effect on October 5, Kong said, adding that 15 people were arrested over the past two days on offenses including taking part in a riot, unlawful assembly, and fighting in a public place.

The police appealed to members of the public to stand up and reject any act of violence, pledging every effort to investigate and bring Hong Kong back on the right track.

Over the past four months, the escalation of violence used by rioters has plunged Hong Kong into chaos and panic. Masked rioters have resorted to radical acts including wrecking public properties, damaging and disrupting transport facilities, setting building on fires, hurling petrol bombs at police officers and into crowds, Kong said.

More recently, residents and shop owners have even been blackmailed by violent protesters.

Police have recorded four cases in just 10 days, where a group, which claimed to be a democratic alliance, had sent messages by fax or email to commercial businesses, threatening to wreck their shops unless they fund violent protests with bitcoins.

The intimidating messages include videos of rioters inflicting extensive damage to shops owned by pro-government and pro-China businessmen over the past few weeks.

Some rioters even went as far as building illegal barricades, intercepting passing vehicles and forcing drivers and passengers to show their belongings and mobile phones to prove their political views are not in support of the local or central government.

Worst of all, groups of rioters who claim to fight for the 'freedom of Hong Kong' often gather to attack and beat up innocent citizens who hold different views, inflicting bodily harm and posing grave danger to public safety, police said.