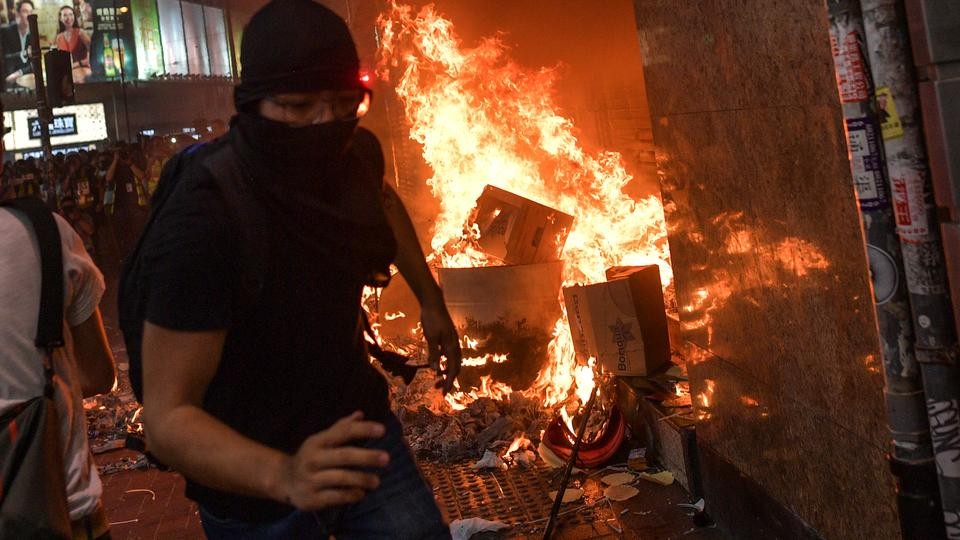 A total of 14 police officers were injured during weekend operations to control the rioters, Hong Kong police said on Tuesday during a press conference, warning that fatal incidents may occur if the radical protests' violent acts show no sign of abating.
The city has met with a new round of violence stirred by the October 5 introduction of the anti-mask law, a regulation that is already in place in at least 15 countries – including France, Germany, Canada - banning protesters from hiding their faces in riots or unlawful assemblies.
In just 4 days, violent protesters targeted major MTR stations and banks in a planned manner, destroying more than 100 local shops, vandalizing 49 MTR stations, smashing 86 traffic lights, the police said, adding that 213 cases of public property destruction have been registered, while 77 people were arrested on offenses related to the anti-mask law.

One police officer suffered serious head, and neck injuries after hit by a bicycle dropped by some protesters from a higher position during a dispersal operation, according to the police. Another officer was forcefully pulled out of his car and beaten brutally by dozens of protesters who surrounded him in an open fire incident in Yuen Long.
"We don't know whether more serious injuries will occur if this violence continues. We don't want to see any life to be lost because of the current incident," the officer said.
In the last four months, violence perpetrated by protesters has been escalating. Two people were shot after assaulting police, one journalist was burned by petrol bombs hurled by protesters, hundreds of police officers suffered injuries, and innocent citizens were beaten up by rioters for disagreeing with their so-called "pro-democracy" views.
Besides, on Monday, some masked protesters gathered in Yuen Long and Tseung Kwan O and set ablaze barricades on the road. In Sha Tin, some masked rioters damaged traffic lights and stormed the Sha Tin Wai MTR station, according to the police.
Hong Kong police reaffirmed that they would continue to take resolute enforcement actions to safeguard the city's public safety and bring all lawbreakers to justice.

Meanwhile, the city's Legislative Council (LegCo) has appealed for peace as the session is scheduled to reopen next week.

"By stopping LegCo to function normally, that would be detrimental to Hong Kong as a whole. So I would appeal [to] all members of the public, whether your view is different from the government or not, I think, please let LegCo to go on normally," Andrew Leung Kwan-yuen, the president of Hong Kong Legislative Council urged.