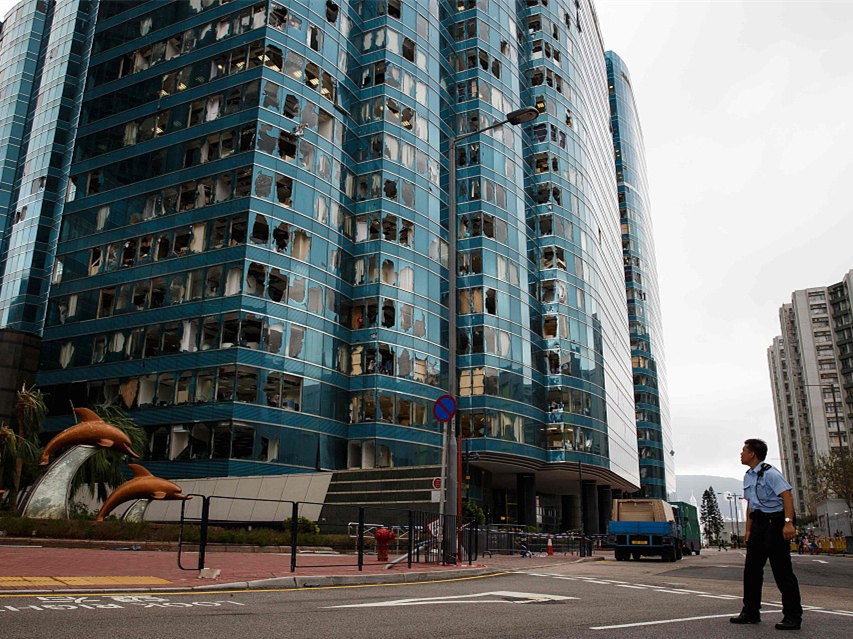 A policeman (R) looks up at a harbourside commercial building whose windows were blown out the day before during Typhoon Mangkhut, in Hong Kong on September 17, 2018. Hong Kong began a massive clean-up on September 17 after Typhoon Mangkhut raked the city, shredding trees and bringing damaging floods, in a trail of destruction that left dozens dead in the Philippines and millions evacuated in southern China. (Photo: VCG)

Bus companies started running an increasing number of services on Monday afternoon, as roads were cleared of trees and other debris crashed down by Mangkhut.

More than 600 sections of road across Hong Kong were blocked by strewn trees and other debris on Sunday, official data showed.

The Transport Department has sent about 600 people to clear major roads, who are expected to finish cleaning most main roads by 5 a.m. on Tuesday, thus most buses can resume services, said Commissioner for Transport Mable Chan.

About 1,500 cases of fallen trees were reported and the figure is more than any case before, said Secretary for Security John Lee.

Trains are providing limited service due to overhead line damage caused by fallen trees along the East Rail Line.

The Hong Kong airport has been keeping two runways open to handle about 2,000 flights after a total of 889 flights were canceled on Sunday, according to the Airport Authority Hong Kong.

To ensure the safety of students, schools will close for another day on Tuesday, because some schools need time to clean up and repair their premises and facilities, and public transport services have yet to be fully resumed, the Education Bureau said in a statement.

The HKSAR government has performed very well this time with sufficient preparation before typhoon, professional response during 10 hours of intense wind and rain, and efficient handling of the aftermath, said Desmond Cheung, a resident living in Quarry Bay in Hong Kong Island.

"I saw many places flooded or covered with fallen tree branches on Sunday, but they were cleared today, showing the efficiency of the counter-disaster system," Cheung said.