HONG KONG, March 25 (Xinhua) -- The total number of confirmed COVID-19 cases in Hong Kong has risen to 410 after 24 new cases were reported during the past 24 hours, the Hong Kong Special Administrative Region (HKSAR) government's Centre for Health Protection (CHP) reported on Wednesday afternoon. 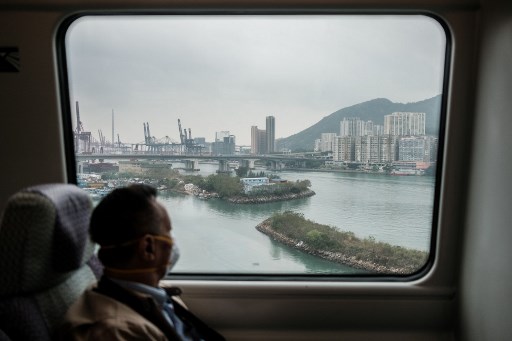 A passenger wears a face mask as a precautionary measure against the COVID-19 coronavirus as he travels on the city-linked train to Hong Kong’s international airport on March 19, 2020. (Photo: AFP)

The 24 new cases involve 13 males and 11 females aged between 11 and 57. Among them 19 people have been to areas such as Europe and North America, while five have no travel history during the incubation period, Head of the CHP's Communicable Disease Branch Chuang Shuk-kwan said at a daily press briefing.

Out of the 19 patients with travel history, three are related to previously diagnosed cases, including two who are asymptomatic.

The 19 patients also include six students who had been studying abroad and a flight attendant.

Among the five patients without travel history, one is related to a clustered outbreak in an industrial building in Cheung Sha Wan area, where a total of four people have been diagnosed with COVID-19.

Three are related to a cluster found in the nightclub hub of Lan Kwai Fong in Central area, including a bartender, a band performer and a flight attendant who has been to the bars concerned.

The source of disease of the remaining one patient, a 36-year-old male, is not clear yet, and the CHP is investigating into the case, Chuang said.