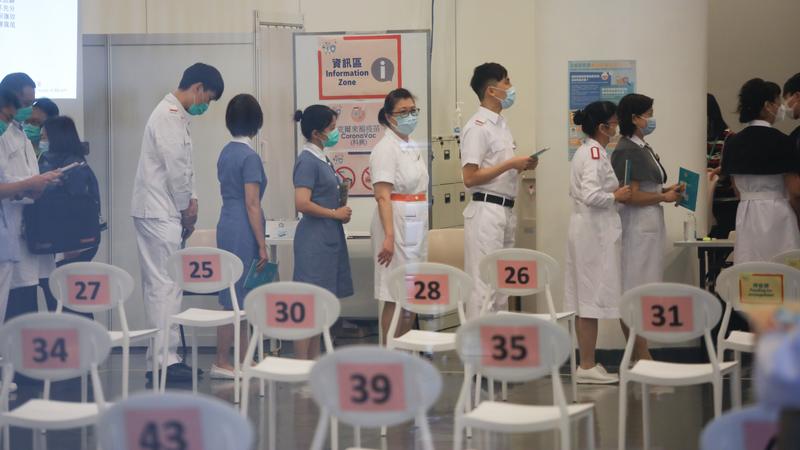 Residents fall in line to get inoculated against COVID-19 at the Community Vaccination Centre set up in the Hong Kong Central Library's Exhibition Gallery in Causeway Bay, Hong Kong on Feb 23, 2021. (Photo: China Daily)

Carrie Lam, chief executive of the Hong Kong Special Administrative Region (HKSAR), told a press briefing that since the launch of the vaccination program on Feb. 26, as of Sunday, about 2.36 million doses of the COVID-19 vaccine had been administered.

According to her, the figure included about 1 million people fully vaccinated after taking the second dose.

Lam also announced the launch of the "Early Vaccination for All" campaign to help build an immune barrier in Hong Kong as soon as possible by significantly raising the vaccination rate during the three-month-long critical period from now until the end of August.

To further encourage the public to get vaccinated as soon as possible the HKSAR government and various sectors in the Hong Kong society will roll out various measures and reward programs, she said.

At the same press briefing, Secretary for Food and Health Sophia Chan announced that Thailand, Vietnam and Cambodia will be classified as "high risk" places. People who come from these places and are not vaccinated have to undergo compulsory quarantine for 21 days upon arrival in Hong Kong. This measure also applies to those from China's Taiwan.

Furthermore, since the vaccination rate in Britain is rising and no relevant imported cases were recorded since the air travel restrictions on Britain were lifted, the HKSAR government will classify Britain as a "high risk" instead of "very high risk" place, Chan said.