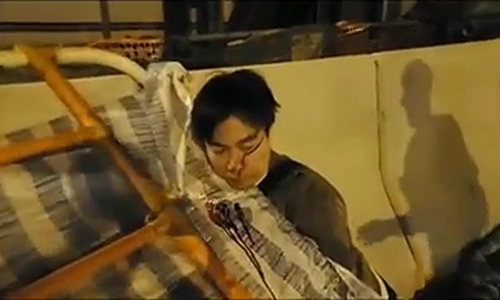 Hong Kong police called for witnesses on Sunday after a person was violently mugged Saturday night and had his mobile phone stolen while clearing road barricades left by rioters.

In a video circulating on social media platforms Saturday night, the resident, who has not been named by police, can be seen being hit about the head with what resembles a wooden plank by a person in a light short-sleeved top, black trousers and a black cap.

In the video, the victim finds he cannot stand and sits slowly on the ground. The victim suffered heavy bleeding and later found his phone was gone, according to police.

Investigators identified the attack as theft and assault, police said on Facebook. No one has been arrested, the post said. The police strongly condemned the violence and said they will pursue all violations to the end.

The victim was not the first person to have been assaulted in recent riots in Hong Kong.

When a man argued and shouted "We are all Chinese!" at rioters in Ma On Shan on November 11, a rioter poured an inflammable substance on him and lit him up.

The victim's wife said November 20 her husband suffered burns to nearly 50 percent of his body and was in intensive care after undergoing skin grafts on his hands and head.