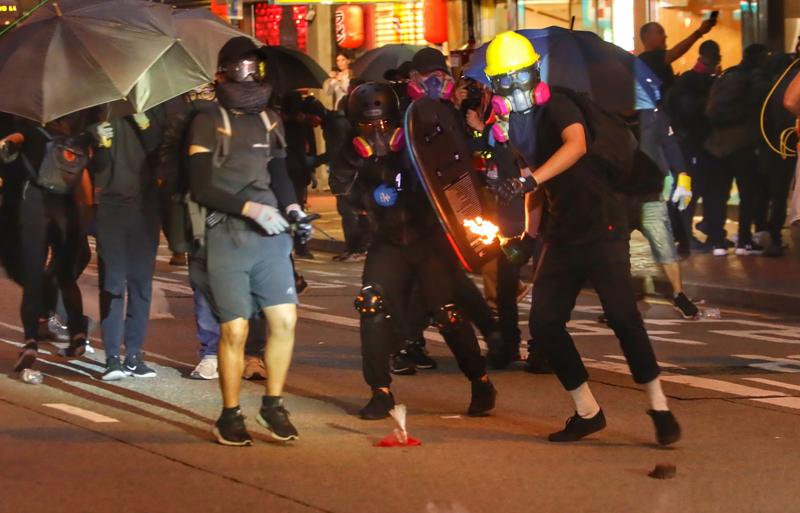 Hong Kong residents have suffered increasingly from the violence that has plagued the city over past six months.

When rioters blocked the streets and damaged the MTR tracks, it was they who suffered from the disruption to their daily lives.

When rioters occupied the airport in August, which led to the all departure flights being halted, it was mainly their trips that were ruined.

When the Education Bureau of Hong Kong SAR suspends classes at all schools, it is their children that suffer.

It was a Hong Kong taxi driver who was dragged out of the car and beaten by the rioters.

It was a 62-year-old man who was cornered and attacked by them.

It was a 57-year-old father of two daughters, who was set on fire.

Over the past six months, the rioters have filled Hong Kong with an atmosphere of terror. Anybody who disagrees with the rioters will be attacked, and anybody who dares utter a word that is different from theirs risks being brutally attacked.

Yet that's not the Hong Kong most people are familiar with. Hong Kong was a city where people felt safe. A city known for its tolerance.

And it is Hong Kong residents who have tried to uphold the city's image. On August 18, when rioters tore the national flag from the pole, it was Hong Kong residents that picked it up and raised it again. And it was they who sang the National Anthem as the flag rose to top of the pole.

On Nov 11, when rioters blocked the road in Wong Tai Sin, it was Hong Kong residents that cleared the debris and barricades. One truck driver was surrounded and brutally beaten by the rioters when he did it, but he never gave up.

On Nov 12, when rioters set fire in the campus of Chinese University of Hong Kong and threatened the safety of the mainland students there, it was Hong Kong residents that drove cars to the campus and helped the students escape.

Hong Kong is your home and an indivisible part of the motherland. For the past six months, it is thanks to your efforts that Hong Kong has avoided falling into the abyss.

There are only 10 days to go before the election for local district council. Please, everybody, be brave and go to the ballots. Let's put an end to this by voting for those who love Hong Kong, and let those who are trying to damage it know our unity and strength.

The whole nation with its 1.4 billion people is standing behind you.