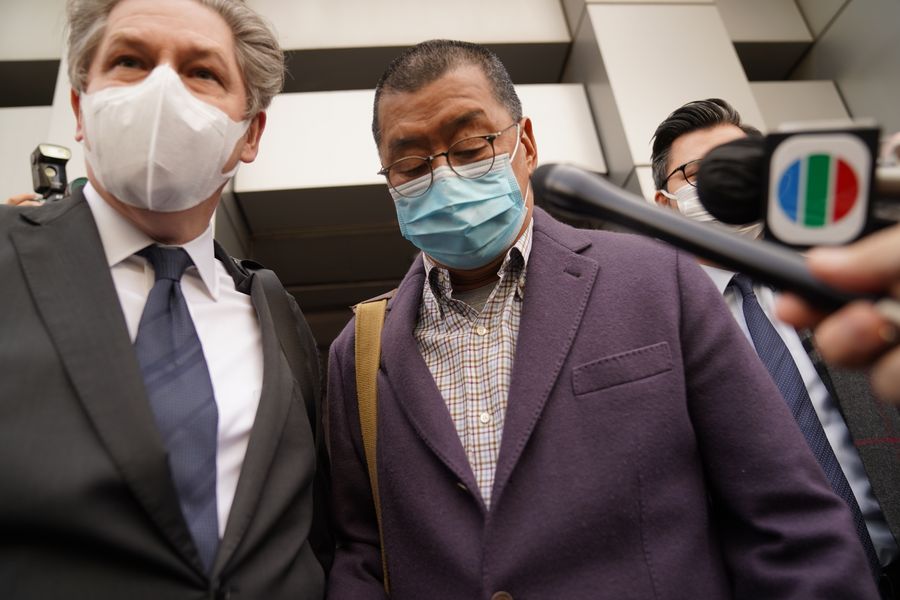 HONG KONG, May 5 (Xinhua) -- An instigator of the Hong Kong riots Jimmy Lai Chee-ying and two others appeared in court on Tuesday to attend a hearing on the unauthorized assembly charge against them.

The three appeared in the West Kowloon Magistrates' Courts of the Hong Kong Special Administrative Region on Tuesday afternoon.

Lai, Lee Cheuk-yan and Yeung Sum were arrested on Feb. 28 for violating Hong Kong's Public Order Ordinance by participating in an unauthorized assembly between Wan Chai area and Central area on Aug. 31, 2019.

They were jointly charged with the count of "knowingly participating in unauthorized assembly."

Lai, also suspected of violating Hong Kong's Crimes Ordinance by verbally intimidating a man during an assembly on June 4, 2017 in the Eastern District on Hong Kong Island, was charged with the count of "criminal intimidation."

The court adjourned the case of unauthorized assembly to May 18.

For the case of criminal intimidation, the court granted Lai bail pending trial. He was prohibited from leaving Hong Kong and was required to report to the police station every week.

Dozens of Hong Kong residents gathered outside the court building on Tuesday afternoon, holding banners and chanting slogans that condemn Lai for inciting riots and call for severe punishment on him.

Lai has been arrested by the Hong Kong police twice this year for his role in the riots.

He was arrested on April 18 along side with 14 others for violating the Public Order Ordinance by organizing and taking part in the unauthorized assemblies last year.

They were prosecuted with relevant charges and are scheduled to appear in court on May 18.