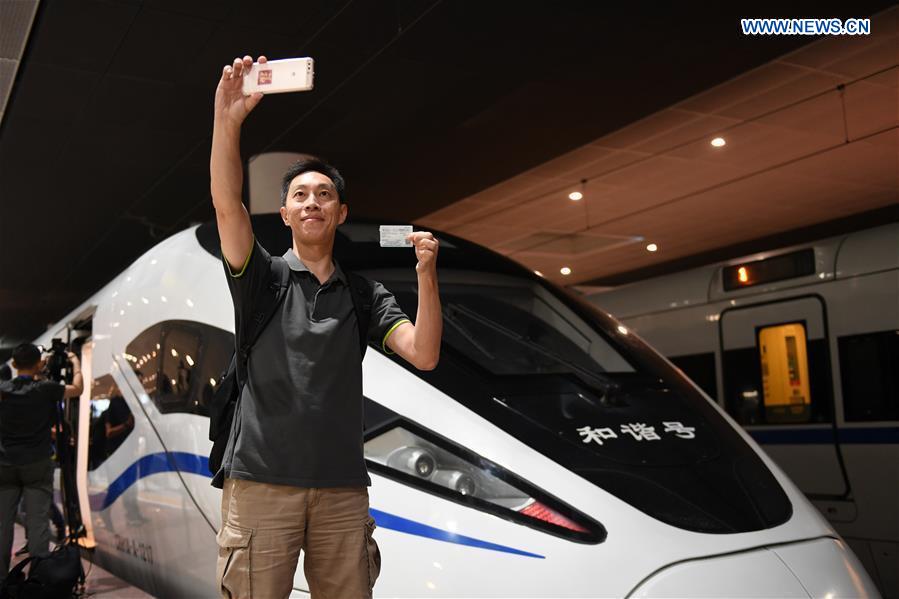 SHENZHEN, Sept. 23 (Xinhua) -- The Hong Kong section of the Guangzhou-Shenzhen-Hong Kong Express Rail Link (XRL) has been put into operation on Sunday, making a "15-minute living circle" possible for people in Shenzhen and Hong Kong.

It now takes 14 to 19 minutes to travel between stations of Shenzhen Futian and Hong Kong West Kowloon.

This is the latest benefit of China's high-speed rail network, the total mileage of which exceeded 15,500 by the end of 2017.

"The XRL train has slashed my commuting time to one hour from three hours," said Alex Leung, a Hong Kong entrepreneur working in Shenzhen.

Leung said he was considering moving his office even closer to the Futian high-speed railway station.

Michael Chong is thinking the other way round. "Quite a few Hong Kong people choose to work in Hong Kong and live in Shenzhen. There is no doubt that the XRL will bring more convenience," he said. "It might be possible for me to rent a spacious flat in Shenzhen again."

Chong works for a travel agency in Hong Kong. He used to live in Shenzhen but the long commute forced him back to Hong Kong.

"The XRL will cut travel time from Hong Kong to many inland tourist attractions, too," he said.

The high-speed trains depart every 10 minutes from stations on the XRL network. Most tickets for the Mid-Autumn Festival and the week-long National Day holiday have been sold out since becoming available on Sept. 10.

Chong said that a number of Hong Kong residents had booked his travel agency's travel-inland packages by high-speed train in October.

In 2017, 241 million travels passed the Shenzhen port, a daily average of more than 662,000, according to the Shenzhen General Station of Exit and Entry Frontier Inspection. Most travelers were doing business, studying, shopping or touring Hong Kong and Shenzhen.