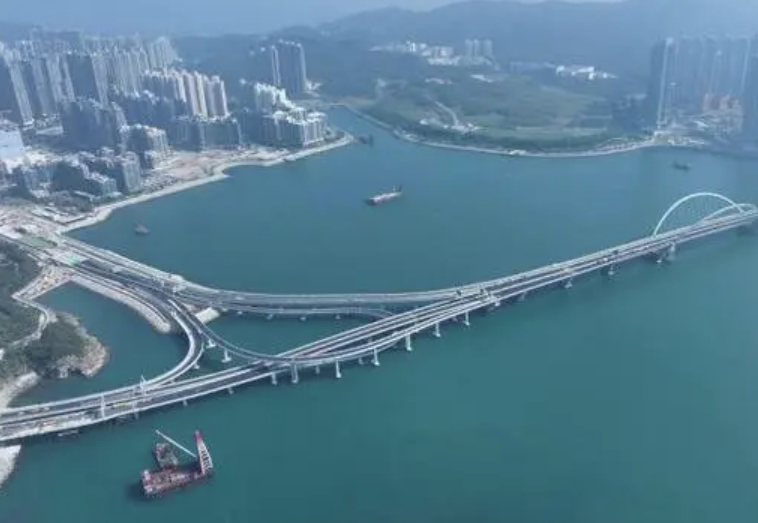 As an important cross-sea corridor at the Junk Bay in southeastern New Territories of Hong Kong, the Tseung Kwan O Cross Bay Bridge, the main project of the Cross Bay Link, was built by the China Road and Bridge Corp., which took over four years.

John Lee, chief executive of China's Hong Kong Special Administrative Region (HKSAR), said Saturday at the commissioning ceremony of Tseung Kwan O-Lam Tin Tunnel and the Cross Bay Link that the HKSAR government will stick to an infrastructure-led approach by rolling out more transport projects and improving existing networks, and will release a blueprint by the end of next year.

The Cross Bay Link in Tseung Kwan O is about 1.8 km long, of which 1 km is a marine viaduct and the steel bridge is an integral part of the marine viaduct.

According to the China Road and Bridge Corp., the bridge is the longest span and heaviest steel arch bridge in Hong Kong.

The steel bridge components were prefabricated in the mainland and the about 200-meter-long bridge was delivered to Hong Kong from Nantong, eastern Jiangsu Province.

This is the first time that the "float-over method" has been applied for bridge erection in China, and the project team also took the tidal conditions into account for the erection.

The bridge project adopted off-site fabrication and assembly, whole bridge delivery and on-site installation, and it is a breakthrough that high strength S690 steel is used for arches of the bridge.

The bridge is the first marine viaduct in Hong Kong with a carriageway, a footpath, a cycle track and viewing platforms at the same time.