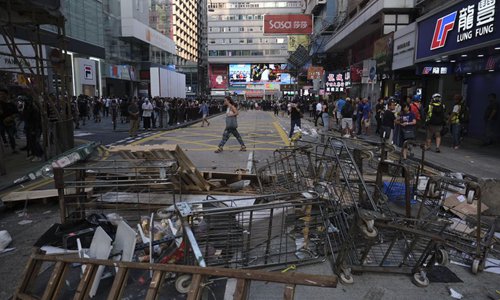 Demonstrators blocked roads in the vicinity of Salisbury Road junction with Nathan Road, while some violent radicals even attacked police officers with hard objects and umbrellas.

After the police's repeated warnings to the violent demonstrators went futile, police officers deployed tear gas and other minimum necessary force to carry out dispersal operation, the Hong Kong police said in a statement.

The police warned all violent demonstrators to stop all illegal acts, and appealed to bystanders to leave immediately.

Due to the unrest, many stores and all facilities of Kowloon Park in Yau Tsim Mong district were closed early to ensure the safety concerns.