CHINA Hong Kong through the lens of Christopher Lim

Hong Kong through the lens of Christopher Lim

Sounds of Hong Kong: "I work with an audio-visual magazine called Maekan, and we wanted to create a sound journey through various cities, going around and capturing sounds and producing a track of them," photographer Christopher Lim tells CNN. "We took the tram from one end of Hong Kong Island to the other. From the top of the tram, we stopped and I wanted to capture the street scene below, especially the policeman in the light." 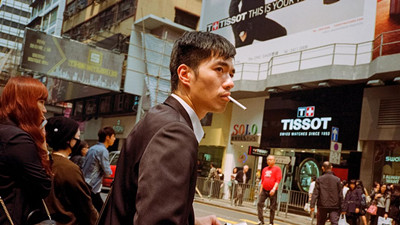 Summer's coming: "I took this image spontaneously, with only a few seconds to make it work. I saw this guy, and just knew I had to take it."I got my camera, put it around my hip, shot it from like bottom up and got him with his cigarette in his mouth, kind of looking like he's really not ready for the day. If I didn't have the kind of chaos in the street, it would have come off as a different kind of photo. This is real life in Hong Kong." 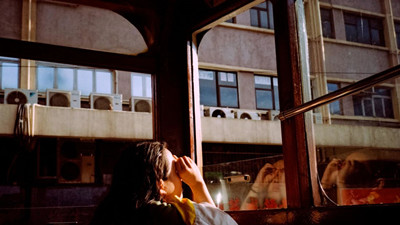 Caged Bird: "This was on the way home, riding the tram through Sheung Wan. We were on the top level at the front of the tram, and this young girl was staring out the window. It seemed like she was looking at the sun, so I wanted to capture the minimal, contemporary feel. I shot it while leaning back, because the tram seating is really tight and I wanted to get as much of the surrounding environment as possible. It was a good time of day, just before golden hour." 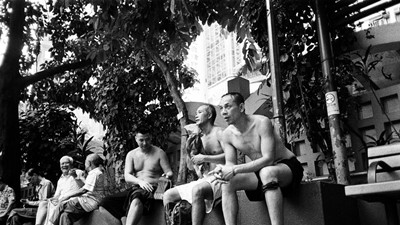 Wild Ball: "I captured these men taking a break after playing a game of street ball. Basketball is a loved sport in Hong Kong, where there's at least one court in every neighborhood. Southorn Playground in Wan Chai is a popular spot with Sundays being the busiest."

Finding Gold: "We were around the Goldfish Market scouting out locations for a shoot and I had my camera with me. I always enjoy the neon lights in Mong Kok -- and I saw something out of the corner of my eye. I framed the image so all the fish tanks were symmetrical. I wanted to capture her looking at her fish, connecting with them." 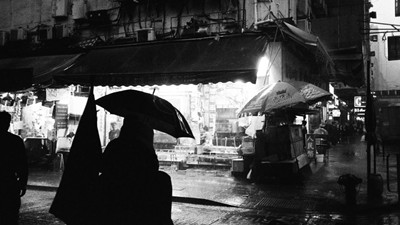 When It Rains: "Sometimes an accidental shot is the best shot. I planned to take a photo of a corner fish market in Causeway Bay when it started to rain. A person walked into my shot with their umbrella opened, creating this silhouette."

Sunday Market: "Old neighborhoods such as Sham Shui Po are surrounded by little flea markets where you can find the most random items. To me, this is old Hong Kong. Just like in Sai Ying Pun, you can capture great contrast lighting with the buildings. In this image, I wanted to capture the man with the cowboy hat before he turned around, so I shot this quite quickly. I never intended to get this lady -- I think she walked into the frame. I don't mind it at all, I actually think it helps the composition and I also love the contrast." 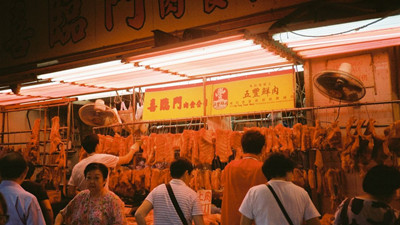 Fresh Meat: "Hong Kong has such an amazing color palette. One subject I'm drawn to most are the local butchers. The red, fluorescent lighting and the exposed meat gives off an eerie feel to it -- it's cinematic." 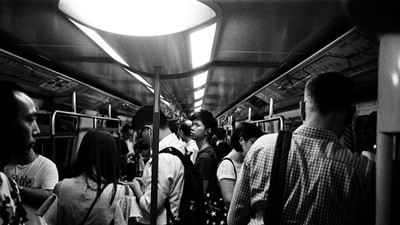 My Wife's Gonna Kill Me: "I took this photograph in Kennedy Town on the way to a friends apartment. Local barbershops in Hong Kong tend to keep their aesthetic the way it was when it first opened and I'm drawn to scenes with character that brings you back to what it was like in the past." 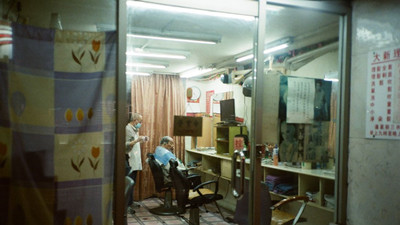 Trainspotting: "This man caught me photographing him while on the MTR [subway train]. Traveling on the train is a good way to capture people in their own world or deepest thought."