CHINA Hong Kong to walk on its own democratic path: veteran HK lawmaker

Hong Kong to walk on its own democratic path: veteran HK lawmaker

Hong Kong has to walk on a path of democracy that fits its own, and the essence of the universal suffrage in the election of the Legislative Council (LegCo) and a Chief Executive is a procedural matter of how a governing team generates. While the democracy has multiple aspects, it is not just a question of how the leadership arises but to the general public, any political system needs to fix economic and livelihood issues that people concern the most, Regina Ip Lau Suk-yee, the chairperson of the New People's Party, who was also appointed recently as convener of the Executive Council (ExCo) meeting of the Hong Kong Special Administrative Region (HKSAR), told the Global Times in an exclusive interview. 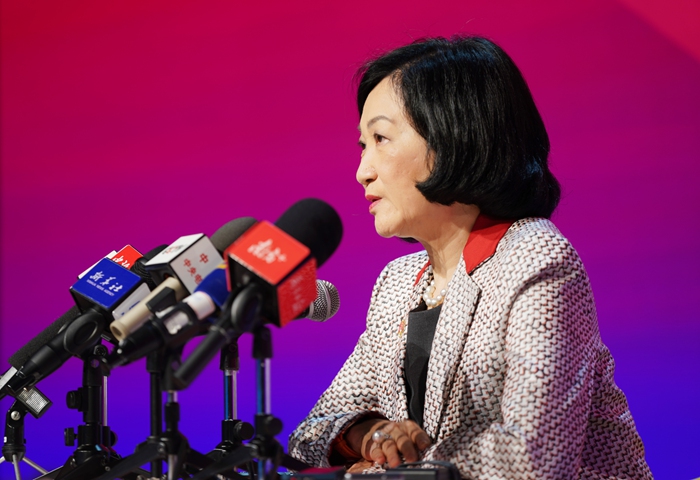 Regina Ip Lau Suk-yee, the chairperson of the New People's Party, who was also appointed recently as convener of the Executive Council (ExCo) meeting of the Hong Kong Special Administrative Region (HKSAR), speaks with the press. (Photo: IC)

As the 25th anniversary of Hong Kong's return to the motherland approaches, the future governing pattern and political perspective of the city have been thrown into the spotlight.

Ip told the Global Times in the interview ahead of the anniversary that in the past, many Hong Kong residents blindly advocated the Western electoral system, but the actual result was that the LegCo had repeatedly fallen into chaos and was unable to operate effectively. The HKSAR government has been hindered from rolling out policies, leading to many issues such as housing supply and wealth gap unsolved for many years. Under such a circumstance, Hong Kong should not blindly copy the Western electoral system.

The Western democratic system encountered many problems in recent years, and almost every election has "torn up" and divided the society, and many Western parties put their own interests above the overall national interests, creating fierce partisan competition, Ip said, noting that the short tenures make some lawmakers and politicians busy at fundraising for re-election rather than focusing on the social development and governance. "Hong Kong should not learn from them for that, and we should focus on our own democratic path," she said.

In the future, the prerequisite for advancing universal suffrage in the election of the LegCo and a CE is that it should proceed gradually and based on the actual situation. In the face of the epidemic, the social turmoil or the major economic downturn, it is not an appropriate time to re-launch the political reform, Ip was quoted as saying in previous media reports.

She also said domestic terrorist activities still exist, and it depends on when the society will restore stability. "It's hard to say in five or ten years, if the current system functions well, we should not change it right away," she said.

Since the implementation of the national security law for Hong Kong and of the electoral system reform with the principle of only patriots governing Hong Kong, some Western media outlets cast doubt over Hong Kong's judicial independence, freedom of speech, and some said the "one country, two systems" principle was destroyed. Over the past 25 years, the practice of the "one country, two systems" principle has achieved huge success and no matter when, "one country" always comes first as the basic political prerequisite for Hong Kong, Ip noted. "During the past 25 years, Hong Kong residents see their lifestyle unchanged, the economic and financial system unchanged, legal system unchanged. Those Western narratives distort the facts," she said.

When someone said the judicial independence in Hong Kong has been damaged and the judicial system affected by politics, nobody showed any evidence about how it was damaged or the court could not operate independently, or for what kind of political pressure the Hong Kong judges face, Ip said, noting that what she saw over the past 25 years was a vibrant common law system that constantly fits in the new development and the constitutional order.

Judges of the Court of Final Appeal in Hong Kong, including overseas temporary judges, all accept the country's Constitution, the Basic Law and the supreme authority of the National People's Congress Standing Committee, which means that the judicial independence in Hong Kong and the respect for the country's sovereign power are well connected. The West criticizing the "one country, two systems" being damaged was out of their political bias and ill-intentioned slander, she said.

"The UK has very strict regulations prohibiting the dissemination of hate speech, and speech that incites separatism and incitement to terrorist activities is considered illegal," she said. "We should further clarify this point to Hong Kong residents. There is a wide space for freedom of speech in Hong Kong, but it must not violate the national security law or other regulations, and must not deliberately spread false information."

With the implementation of the national security law for Hong Kong and the electoral system reform, the political environment in the city has largely improved. But many observers said that the HKSAR government still has a lot of work to do in education and "winning heart back." "It's a priority in its work for the new-term HKSAR government to win more people's hearts and to fix the division of the society left by the social turmoil in 2019, not through means such as amnesty, but through more long-term means such as education," Ip said.

Some people suggested doing the "reconciliation" work with regard to the social turmoil in 2019, and even setting up a "reconciliation committee or commissioner" to do the work. But I don't think it will work if the "reconciliation" is achieved through amnesty because the criminal activities have to bear the legal consequences. "If not, the society will be plunged into the chaos," she said.

To win hearts, the HKSAR government should do it through the education, Ip said. In 2019, many young Hong Kong people went to the streets and shouted pro-secession slogans, and that's the problem with the education. "During the past years, we had a school curriculum with de-sinicization content. And among 50,000 middle school students who took the test, only 5,000 studied Chinese history, and 2,000 studied Chinese culture," Ip said, noting that the Hong Kong youth did not develop a sense of pride in being a Chinese, which has to be changed, immediately.

But the veteran lawmaker believes that it won't be an issue in the long run. And the city's prospects are still promising given its attractiveness to foreign talent and capital. Although Hong Kong faces geopolitical challenges, its diversified society with a high degree of internationalization makes Hong Kong continue serving as a bridge between East and West.