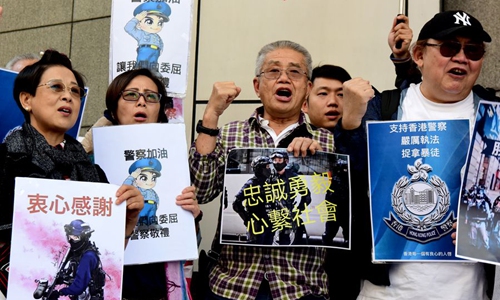 ViuTV, a channel under a company owned by Richard Li Tzar-kai, son of Li Ka-shing and chairman of Pacific Century Group, announced on its Facebook account early Thursday that it had deleted related posts of a newly released horror drama Dark City that contained "improper words and sentences."

"As a public media, we will maintain neutrality of the platform and not allow individuals to use the platform for releasing personal opinions," read the announcement.

The platform editors said in the announcement that the channel "regrets deeply" about the issue and reserves the right to affix responsibility to the post provider.

The improper posts were related to a unit play of the drama and were provided by the production crew, according to the announcement.

Sunny Lau and Ong Yi Hing, joint directors and writers of the unit, also released statements on their Facebook accounts admitting that the improper posts were produced and provided by their company.

They said they regretted the controversy caused by improper words and sentences in the posts.

But Lau and Ong's statements failed to ease some furious mainland internet users who urged them to apologize instead of just showing "regret."

Some pointed out that they were intentionally burying sentences in unordered text.

"Apologize, do not hate the police," read one typical online comment.