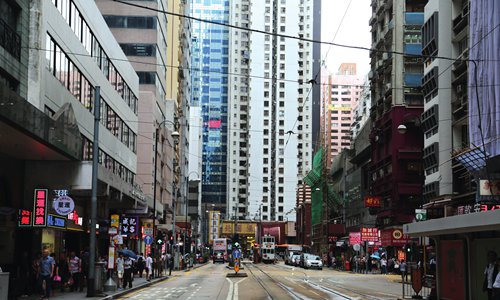 Angry, anxious and reckless young anti-government protesters rushed into the streets of Hong Kong to oppose the extradition amendment bill initiated by the Hong Kong Special Administrative Region (HKSAR) government, and some of them were yelling radical, separatist and insulting slogans at the police, the chief executive, the government and even their motherland - China.

Under this kind of situation, Hong Kong society and many people from the Chinese mainland could not stop wondering what had happened to the young people in Hong Kong. Why do many of them refuse to recognize their Chinese identity? Why do they feel inferior to their former colonial master Britain and naively help foreign forces make trouble for their own city?

Hundreds of young protesters stormed the Legislative Council (LegCo) Complex on July 1, leaving graffiti, such as "Hong Kong is not China," "politicians are dogs" and many other dirty messages on the wall and tore copies of the Basic Law.

Some Hong Kong secessionists also raised a black version of the Hong Kong bauhinia flag outside, and such behavior shocked the majority of Hong Kong residents, who strongly condemned the violence but also began reflecting upon the reasons behind the rising anti-Beijing sentiment among Hong Kong young people.

On Sunday's demonstration from Tsim Sha Tsui to the West Kowloon high speed railway station, some young Hong Kong protesters held up the Hong Kong colonial era flag and even the Union Jack.

Adam Tong, 32, a Hong Kong postgraduate student at Tsinghua University who is studying international relations, told the Global Times that "the experience that I have in Tsinghua is much different than I had at the Chinese University of Hong Kong (CUHK) when I was an undergraduate."

Mainland students are much more hardworking than their peers in Hong Kong, Tong said.

"Professors in Beijing will teach you a lot about the development of the country, will help you understand the crucial policies made by the government that might affect your future, and these will make you confident and patriotic. Unfortunately, most Hong Kong students don't have a chance to get this kind of education," he noted.

Some young Hong Kong people who are infatuated with the West have never been to the mainland. They are scared of China's rising power for no reason. Incomplete education and biased media reporting have played a very negative role in helping shape their misunderstanding about the country, parents, officials and business representatives told the Global Times in recent interviews.

Peng Junfa, a Hongkonger in his 20s, told the Global Times that some of his classmates are infatuated with the West, and often attack others who hold different views. "They've never visited the mainland and they have little understanding of Chinese culture and history, which hinders their awareness of being Chinese citizens," he said.

The Education Bureau of the HKSAR government unveiled the revised curriculum framework for junior middle school Chinese history and history subjects in May 2018, a move to broaden their perspective of history, the Xinhua News Agency reported.

Peng, who supports the Hong Kong police and condemns the violence and Hong Kong secessionists, said some of his radical friends also attacked him in person, which also ended their friendship.

"Hong Kong authorities have to re-examine their education policy, and ask why young people do not trust us," Michael Tien Puk-sun, a Hong Kong lawmaker, told the Global Times. "It is challenging work to educate young people within 'one country, two systems,' as teachers need more time to explain different ideas, and direct students to a correct way. This is a question of attitude," he said.

Also, local media outlets, including the extreme anti-Beijing media like Apple Daily, have been influencing the young generation in a very negative way, as they come up with one-sided stories, which neglect the positive side of the mainland's progress in the social and economic spectrums.

Among all the footage aired showing protesters storming LegCo on the night of July 1, there is no footage showing how protestors cut off the building's internet networks and stole the database, which makes people wonder whether those media staff allowed inside were in the same group as protesters, a source close to the local authorities, who preferred not to be identified, told the Global Times.

"Colluding with external forces is one thing we are concerned about," he said.

"Freedom of the press does not justify biased views of the press… many Hong Kong students can't see it clearly," Lee Wai Lok, a young Hong Kong resident who questioned the credibility of the local media, told the Global Times.

Tong said, "Actually, many former alumni of the CUHK from the 1970s-1980s told me that during that time they received a lot of patriotic education and they were taught that they should be responsible for the country's future, but we don't know why many Hong Kong-based universities stopped teaching students to love their country but injected anti-mainland ideologies into the students' minds after 1997, especially in 2010s."

Foreign forces are deeply involved and even dominate the media and education in Hong Kong, and they select negative information and news about the mainland to mislead the Hong Kong public and students. Objective and positive reports and education about the mainland were excluded by these pro-West forces, said Victor Chan Chi-ho, 33, vice chairman of the Hong Kong Association of Young Commentators.

Many Hong Kong people, especially the youth, have no confidence in the city's economic development because they feel heavy pressure from the extremely high house rent and low incomes. Observers believe that this is the reason why the youth are generally anti-establishment or even anti-Beijing, since they need to vent off their anger, tension and disappointment with the HKSAR government.

Ashley Tse Hiu Hung, 29, chairwoman of Hong Kong Youth Enlightenment, told the Global Times that the real economic reason could be more complicated than this.

Hong Kong, as an international financial center, has very advanced financial and high-end service industries, which are high value-added industries for the city. But, unfortunately, they cannot provide too many jobs for the youth, Tse said.

As a harbor city, Hong Kong's cargo handling capacity is declining and its science and technology industry is lagging behind, she said. Compared to mainland cities like Shenzhen, which is becoming an international hub for high-tech and innovation, which can bring many jobs to the youth with high educational backgrounds, Hong Kong, as a de-industrialized city, can only provide low-income jobs in consumer services, such as the tourism industry.

Many young Hong Kong residents with bachelor's and master's degrees from local universities like the University of Hong Kong and CUHK told the Global Times that they have high expectations for their future jobs, but the city's economy cannot provide what they want. Hong Kong resident Allen Chan, 32, said "we are extremely pressured and hopeless. Every day when you go back home and stay in a very small apartment with high rent, how could you be happy with the government and be patriotic?" He tried to justify his opposition to the extradition bill. But even he was not very sure about the connection between the bill amendment and the economic situation that he complained about.

A member of the Kowloon Council who requested anonymity said a new trend is that these Hong Kong youth now have no confidence to compete with young talent from the mainland, because many of them have never been to the mainland, and they refuse to learn anything about the development of the whole country, so most major enterprises prefer to hire graduates from the mainland who are more open-minded and knowledgeable.

"The fact is cruel, because while mainland students work hard to study and apply for internships, Hong Kong students spend their time on radical political activities and entertainment," he said.

Chinese State-owned companies or major international foreign firms, as long as they have a connection with the Chinese mainland, prefer to hire and promote young employees from the mainland, he noted.

The well-educated mainland youth in Hong Kong will have better career opportunities than many local young people in many companies, and this makes some Hong Kong youth even more hostile to the mainland, he noted.

Tse concluded that "a lot of Hong Kong youth are losing confidence in their future, and believe they have no hope for their own development. By adding the incitement by the opposition group and misguidance by some irresponsible people in Hong Kong education circles, Hong Kong youth express their negative emotions through political activities."

The Guangdong-Hong Kong-Macao Greater Bay Area strategy is believed to be a solution to Hong Kong's woes, since it will boost economic integration of the region and bring new opportunities for Hong Kong to play a crucial rule in the region to serve the Belt and Road Initiative, observers said.

Ng Hok Ming, Executive Chairman of the Greater Bay Area Youth Association, said the cities in the Greater Bay Area complement each other. "For example, Shenzhen is very advanced in IT, innovation and technologies, but Hong Kong is more advanced in finance. The integration will surely bring more opportunities to Hong Kong youth, but the point is the government should make more efforts to promote this strategy to the youth, to let more young Hong Kong people learn and understand the strategy."

Tse said "the opposition group and foreign forces are trying to smear the Greater Bay Area, and the mainstream mainland media and government should make more efforts to guide the youth. Otherwise, they will be misguided again."

Traditional pro-mainland media in Hong Kong are losing their influence among the youth as well. Chan suggested that these media should learn to use new media platforms and technologies and learn to communicate with the youth in new ways.

Almost every Hong Kong young person who opposes the extradition bill reached by the Global Times said that they haven't read the full text of the amendment and everything they learned about the bill came from Facebook groups.

"As a student, I hope the government is more active in the training of teaching staff in Hong Kong, to prevent harmful anti-Beijing ideologies from spreading among the youth. More patriotic teachers should be included in the teaching staff, and we should pay more efforts to educate students in primary school rather than struggle with them in college," Tong said.

An appeasement approach with the opposition group should not dominate the HKSAR government and LegCo, as compromise with violent protests and illegal activities will only embolden opposition and anti-mainland forces to act more radically and ruthlessly, many pro-establishment politicians warned.

Tse said: "We haven't seen any notable young representatives of patriotic and pro-establishment groups in the mainstream Hong Kong media. The mainland, Hong Kong and foreign media are all focusing on people like Joshua Wong Chi-fung who's strongly anti-Beijing, and this has helped the pro-West forces further misguide Hong Kong youth, because the youth will believe this is how a young Hong Kong person should act like."

"We should pay more attention to the youth, to better use new media," to find and shape more opinion leaders to speak for the silent majority who disagree with the opposition group and anti-mainland ideology, Tse stressed.