Over six months of tumultuous riots in Hong Kong have led to a society divided with many families falling apart. With the social climate cooling down, such an experience has  become unforgettable for some. 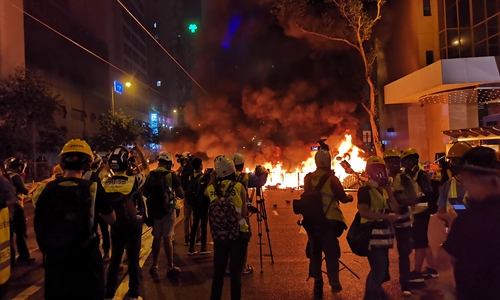 A 28-year-old Hongkonger called Basa belongs to the so-called blue ribbons, which usually refer to government and police supporters. He said he clearly remembers the day of Hong Kong's district council elections on November 24 when the pro-establishment camp suffered a big defeat. In a family group chat, many of his cousins insulted him for expressing his hopes that the pro-establishment candidates could win. This forced him to quit not only this group chat but also other family group chats with his peers who oppose the government and the police.

"In their eyes, I am an outcast and they doubt my personality, and it is even impossible to argue with them," Basa told the Global Times.

Basa said that except for his father who holds the same political view as he does, he has not contacted other family members in Hong Kong since August even though he does not know their political stance.

"When family members meet, they would unavoidably talk about social issues and risk turning against each other due to political differences. Therefore, it is better not to even meet," said Basa.

Rampage across the city, vandalism, hit-and-runs, arson at MTR train stations,  and black-clad rioters have turned Asia's financial and business center into a state of lawless Gotham City, creating a nightmare for many citizens. Some of the violent images from the riots include confrontation between police and protesters, protesters beating up innocent citizens and rioters turning Hong Kong campus into Syria-like warzone.

Hong Kong used to be a city that values different opinions where everyone could express their views in a peaceful way. Political differences are now tearing apart families. Some elderly people, who usually strongly support  law enforcement, have been avoiding getting into complex political debates with their children, most of whom show more compassion for protesters regardless their radical and violent acts. And some parents who talked with the Global Times expressed growing anxiety over the city's social divides.

Allen Wong, 52, a taxi driver who lives in Kowloon District of Hong Kong, told the Global Times that the months-long turmoil in the city has divided his family, and the relationship between him and his son is getting very intense as they totally disagree on the turmoil. He has no solution but to keep distance with his son and not mention anything about politics at home.

"When we argued about the current situation my son was like extremely angry and he can't persuade me. And I remember one time he got a knife to threaten me but was stopped by his mom. At that moment my heart was broken into pieces."

Wong asked "what turns our children into extremists? Their teachers? Media? Foreigners? I have no idea, but there must be some bad guys manipulating them."

Wong said he believes the reason why  some young people are excited and even enjoy the protests is because he believes some of them get paid for this. "It is very common. My son got 30 Octopus cards when coming back home from a protest in August."

Each one is worth 250 Hong Kong dollars ($32.2), and on that day, he said to me "look at this old fool. I can earn money now and you don't have the right to lecture me anymore."

"He got Octopus cards rather than credit cards or debit cards means he is just nobody in those protesters. He was lucky, as I know, he didn't hurt anyone yet. But what about those who set fire to burn an old man and even threw stones to kill a 70-year-old elderly? They are criminals already. This has nothing to do with democracy, and the young men are just pawns on the chessboard," he said. 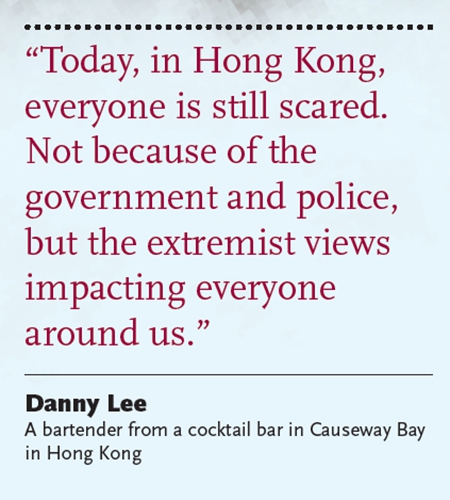 Hong Kong security chief John Lee Ka-chiu told a LegCo meeting on Wednesday that it's believed that some rioters even received training abroad, and some tactics used by protesters showed they have had outside help, according to media reports.

Cheung HKRC also provides psycho-education talks and training to empower teachers, parents, community workers, and the general public to respond to the massive mental health needs. More than 2,400 participants had received these trainings since June.

"We would not take sides in hostilities or engage at any time in controversies of a political, racial, religious or ideological nature, in order to gain trust and acceptance from all parties, so that the Red Cross personnel can provide continuous and effective humanitarian services to people from various backgrounds and with different political stands under any circumstances," Betty Lau, Deputy Secretary General (Services) (Acting) of HKRC, told the Global Times.

Patty, a 50-year-old woman who lives in Tseung Kwan O, told the Global Times that she came to live Hong Kong from Central China's Hunan Province since 1997 and married a local resident. "People here used to be very polite, with high moral standards. For example, we did not allow people to post up a number of banners and posters anywhere they wanted," she said, noting that anti-government posters, some of which are even vulgar and offensive could be seen anywhere across the city.

Black-clad protesters  vandalize a wide range of public facilities including traffic lights and pavement. The repair work can cost  up to HK$65 million ($8.4 million), according to media reports.

"It's hard to image a civilized society could tolerate such lawlessness," she said, noting that she gets very emotional seeing hardcore protesters act as vigilantes by beating up people who disagree with them. She said she was mentally crashed when she saw a police officer slashed in the neck during a law enforcement operation in October. "When I saw it on TV, I could not stop crying. What's wrong with them [rioters]? This is murder!" she said.

When she looked back to what had happened in the past six months, her voice trembled. "I don't have relatives or family members working at the Hong Kong Police Force. The way rioters acted was insane and inhumane," she said. 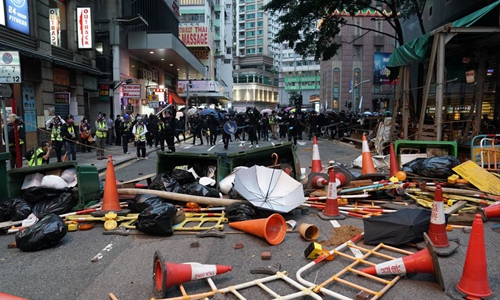 "There have been obviously growing numbers of people who came to seek consultation, showing symptoms like anxiety and depression," she said, noting that stress has also exacerbated their psychological-related physical symptoms.

Symptoms including abnormal heartbeats, headaches, stomach pain, insomnia, and nightmares could occur when they recalled memories of violence and protest-related images, she said.

Basa said that after attending a gathering in October sending out Chinese national flags, a typical activity for blue ribbons, he was beaten by rioters. It was the first time he said that he felt scared and that his personal safety was threatened. "I would be extremely careful when I open the WeChat app on my phone to avoid being attacked," said Basa, saying that  people who used WeChat are often seen as those who have close relationships with the mainland.

He said his scared feeling got entrenched after a 57-year-old man was set on fire following a confrontation with violent protesters in November.

"If I were there, I would argue with them as well, and I could be the next one being set on fire," said Basa. 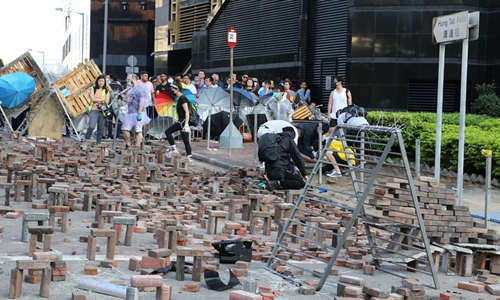 Different political stances have caused a divergence among the public, and many Hongkongers do not trust people around them anymore.

Danny Lee, 36, is a bartender from a cocktail bar in Causeway Bay. His bar is located at a busy district for shopping and entertaining that is popular among foreign tourists and residents, but was frequently interrupted and damaged by protests and violent incidents.

"I used to support the protests to be honest, but now I am not very sure because the whole movement is changing and corrupted by extremism," he said.

"Today, in Hong Kong, everyone is still scared. Not because of the government and police, but the extremist views  impacting everyone around us," he added.

If people say something against the riots or criticize the violence in some public areas, they will be targeted by some radical people, Lee noted. "Once they labeled you as a guy with different opinion and get support from the crowds, then they will find the legitimacy to hurt you, not just words, but with physical harm. This is mad."

Cheung, a clinical psychologist consultant, said she has been trying to stand neutral as that she received different patients; some blamed police for beating up protesters, and some cried when they talked about protesters damaging public properties. "I won't judge their values of political stance. Emotion itself cannot be judged right or wrong," she said.

However, the overall Hong Kong society has become more radicalized as the social movement has continued, and people expressed more emotional feelings rather than their opinions.

"We all need to calm down and try to respect other people and listen to different voices," Cheung said, noting that this process indeed takes time.