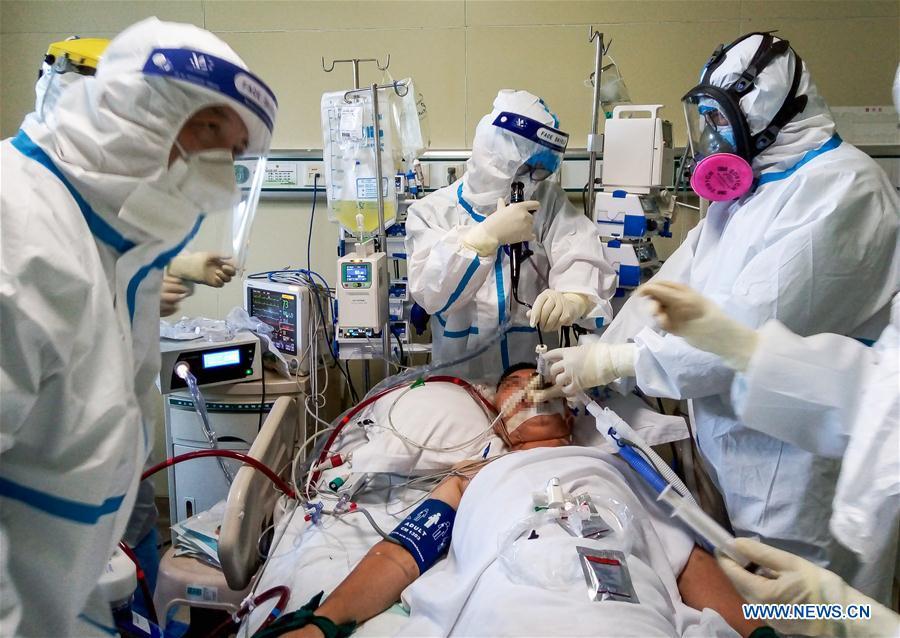 Tong Zhaohui, center, treats a COVID-19 patient at the Beijing Ditan Hospital in Beijing, capital of China, on July 25, 2020. Tong is a vice-president of Beijing Chaoyang Hospital and an expert of the National Health Commission medical treatment group. (Photo: Xinhua)

Among all medical inventions in the world, respiratory specialist Tong Zhaohui said his best weapon is the stethoscope, the prototype of which was created over two centuries ago.

Behind his penchant for this unassuming tool is the belief that only by getting closer to patients can a doctor gain a full understanding of their condition and devise effective therapies.

"To be a good doctor, being grounded in the front line, the ability to work in a clinical setting is the basic qualification," he said. "With that in place, medical workers can keep honing their comprehensive skills."

Dealing with the COVID-19 epidemic at its earliest stage, when the virus' infectiousness and lethality were unknown, did not discourage him from examining infected patients at their bed sides and placing his stethoscope on their chests.

Tong, vice-president of Beijing Chaoyang Hospital, was among the first batch of medical experts sent to Wuhan, Hubei province, the region hit hardest by the COVID-19 epidemic in China. He arrived in the city on Jan 18.

He was one of the 1,499 individuals honored as role models in fighting the COVID-19 epidemic at a meeting in Beijing on Tuesday.

"My first impression of hospital wards in Wuhan was that there were so many serious cases. A large number of them had low blood-oxygen levels and had difficulty breathing," he said.

"In a standard intensive care unit, each nurse will be assigned one patient to focus on. In Wuhan, one nurse was responsible for two to three wards containing infected cases at the beginning," Tong explained.

As a result, even though struggling patients were given masks that helped pump oxygen into their lungs or were put on noninvasive ventilators, the lack of constant monitoring and adjustment of oxygen flow had rendered treatment ineffective, according to Tong.

"The whole room was filled with monitors beeping from alerts, and nurses were at a loss," he recalled.

To overcome the dilemma, Tong and other front-line experts proposed earlier and more aggressive intervention measures that could prevent mild cases from worsening, thus alleviating burdens on the local healthcare system and reducing mortality rates.

This strategy entails wider adoption of mechanical ventilation that involves putting tubes into patients' airways to push air in. The process is more intrusive for patients and might pose higher infection risks for surrounding hospital staff.

Tong sensed the reluctance of medical workers but believed evidence-based knowledge would prevail over irrational fears.

He then rushed between hospitals in Wuhan, explaining the safety and rationale behind the use of intubation.

"I spent about an hour and a half on the subject, trying to assuage unfounded panic about the disease and spread awareness about the benefits of the technique," he said.

"Some experts have defended less intrusive techniques in the initial stage. That's probably because they had not worked on the front lines or in the wards and hadn't seen firsthand the status of infected patients."

Standard protocols on the use of intrusive ventilators were soon laid out in detail in the fifth version of the diagnosis and treatment guidelines published by the National Health Commission in early February.

Tong had defied conventions more than once during the fight against the novel coronavirus.

He put forward the new diagnostic method of classifying clinical diagnosis cases as confirmed cases based on their symptoms and scan imaging. The approach was used briefly in February to accelerate the admission of patients when the local testing capacity was overstretched.

During his more than 30-year medical career, Tong has confronted the virus that caused the severe acute respiratory syndrome (SARS) outbreak in 2003, different strains of bird flu and imported plague cases.

Past experiences with deadly viruses have taught him to remain calm, undaunted and rigorous in his work. But his early experiences in Wuhan gave him a feeling that he had never felt before: deep frustration.

"I felt like a loser as a doctor and was helpless," he said. "I was confident when I treated SARS patients, but in Wuhan, I was not sure."

Knowing that fellow healthcare workers nationwide might fall prey to similar feelings of impotency and uncertainty, Tong began sharing his latest findings and dispelling rumors on WeChat, often after coming off long shifts.

"I wrote to professionals with the hope that other doctors could learn something new," Tong said. "I also wrote for nonprofessionals, hoping that the public could view the disease in a rational way and avoid being swindled by misinformation."

On April 26, the last COVID-19 patient in Wuhan was cleared of the infection. On the same day, Tong left Wuhan for Harbin, Heilongjiang province, to help battle a new cluster of infections.

In the following months, he was assigned to guide the rescue of COVID-19 patients in Jilin, Hubei and Shandong provinces, as well as those in Beijing Ditan Hospital.

It was not until Sept 1 that Tong returned to his office in Beijing Chaoyang Hospital.

He has fulfilled what he declared in a WeChat post near the eve of this year's Spring Festival on Jan 24: "I am an old soldier. I have rich experiences in fighting the war, and I will make sure to accomplish the tasks."