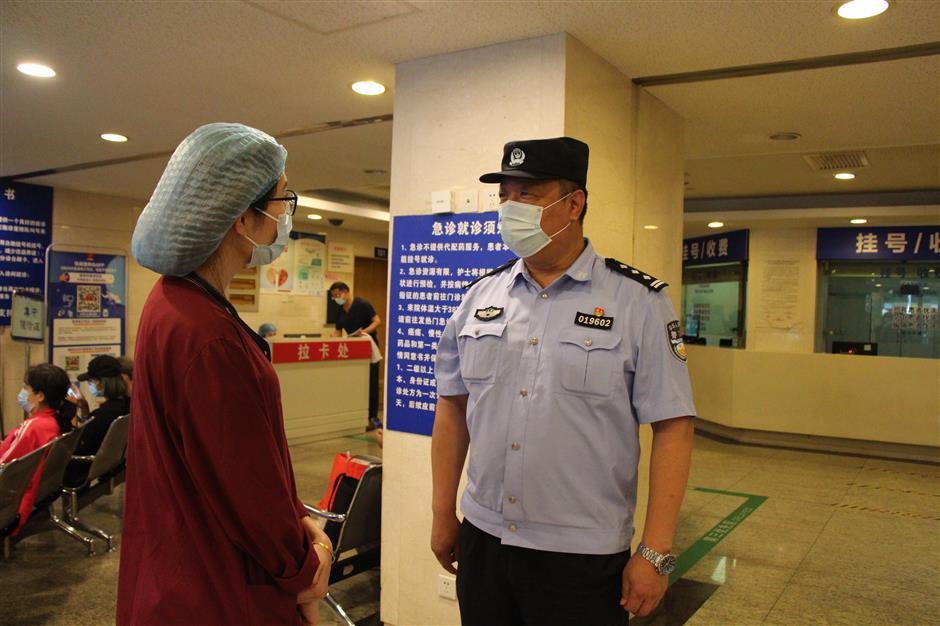 Zhu Yaoming, 58, is one of the few police officers in Shanghai whose daily beat is a hospital.

For his work and contribution at Ruijin Hospital over the past decade, the experienced police officer from the Ruijin Road No. 2 Police Station recently got an award from Huangpu District.

His primary task is to intervene in medical disputes and help people in need.

Medical disputes tend to happen more frequently in top hospitals such as Ruijin, which are often the last resort of many patients seeking a cure. The asymmetry of understanding on medical issues between doctors and patients and their families is the most common cause of such disputes.

"In 80 to 90 percent of cases, disputes are quickly resolved, but not so in other cases," said Liu Xiying, director of the hospital's reception office on medical issues who has been working there for almost 20 years.

Zhu is engaged by the hospital when serious disputes arise, such as a case in June this year.

In early June, four people carried a portrait of a deceased person to the hospital and knelt down outside. The person was a patient in his 50s who died after having heart surgery at the hospital.

Since the four people disturbed public order at the hospital and refused to go, Zhu took them to the police station where he assured them that he will be there for them if the hospital refuses to talk to them.

The next day, the four met with Liu's team and as a result of a communication got some humanitarian reimbursement from the hospital which acknowledged there was a certain lack of communication about the risks of the surgery from its side.

"In medical disputes, the hospitals are more vulnerable than the public believes, but my role as a police officer is not to take sides, but to make sure that those caught up in disputes play by the rules," he insisted.

Zhu goes to work at the hospital every day at 7:30am, usually from the emergency ward where disputes tend to happen in the morning, generally regarding the treatment for overnight patients.

Though going off work at 5pm, he still makes himself available 24/7 and is sometimes called by the hospital to help deal with some situations late at night.

Recently, Zhu was engaged to deal with a patient who refused to go to the fever clinic while having high fever. As a pandemic control measure, all patients with fever are required to go through the fever clinic for a COVID-19 screening.

The patient, who was seeking a doctor for diarrhea, had a normal health QR code.

"Since he was not a suspicious COVID-19 case, it would be against the law to deny him entry to the hospital," Zhu said.

With the patient claiming he had no money for a COVID-19 nucleic acid test that was mandatory, under Zhu's mediation, the hospital agreed to foot the test bill.

Apart from dealing with disputes, Zhu is always ready to help both doctors and patients at any time.

In early February last year, Zhu got a help call from a doctor at the hospital's gastroenterology department.

There was an urgent need to get in contact with about 60 patients who had to be reminded to stop taking medicines for gastroscope checks, which had been suspended due to the COVID-19 pandemic.

Zhu helped find the contact information of more than 50 patients.

In another instance, a surgery patient who had been staying in the ward for over seven years sought help from Zhu, saying he wanted to go home. He had recovered from a brain stroke a long time ago and could walk with a walking aid, but his family refused to take him home.

Zhu and staff of the hospital's reception office on medical issues drove him home.

"At first, his family refused to let him in, but after two hours of communication, they finally relented and accepted him," Zhu recalled.