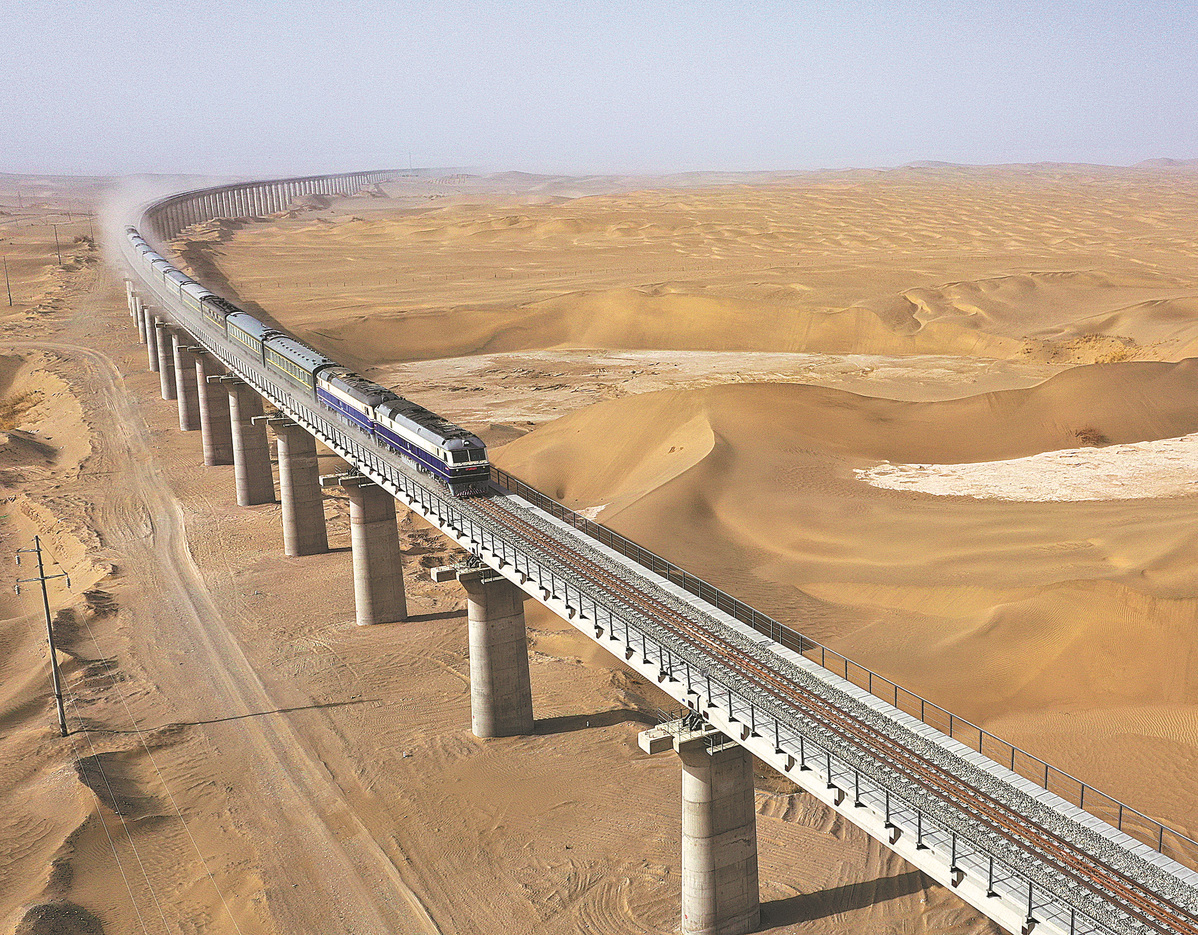 A train goes on a test run on the Hotan-Ruoqiang railway on March 11. The 825-kilometer line will open to the public on Thursday, marking the completion of the world's first railway loop circling a desert. (Photo by WEN XINGHUA/FOR CHINA DAILY)

The 825-kilometer line, linking the city of Hotan with the county of Ruoqiang in the Bayingolin Mongol autonomous prefecture, is on the southern edge of the Taklimakan Desert.

The line, with a designed speed of 120 km/h, will connect to the Korla-Kashgar, Kashgar-Hotan and Golmud-Korla railways, forming a 2,712-km-long loop line circling the Taklimakan.

The line has 22 stations, half of which provide passenger service. The journey from Hotan to Ruoqiang will take about 11-and-a-half hours.

The loop line will pass five prefecture-level regions in Xinjiang and connect to the Golmud-Korla railway, which links the city of Golmud in Qinghai province and the city of Korla in Xinjiang. This will be the third railway linking Xinjiang with other parts of China.

The line brings railway service to some new places in southern Xinjiang, boosting socioeconomic development and promoting rural vitalization in the region.

About 65 percent of the new line－534 km－is in the sand and storm zone, which made construction tremendously difficult.

Construction, which began in 2018, used a method of prefabricating 434 bridge piers and then assembling them on site.

In some sections with strong wind and shifting sand dunes, designers built bridges to allow the sand and wind to pass beneath them, reducing any harm to the line.

Grass, trees and shrubbery are also planted along the rail line as a barricade against sand.

Confronted with an intricate natural environment, the company set up a management and construction team with rich experience in desert railway construction, as well as a research team, said Zhang Gang, project manager of China Railway's 14th Bureau Group.

Two passenger trains are scheduled each day, as well as eight freight trains that will transport cotton, walnuts, dates and other commodities to the rest of China.

Beginning on Monday, bullet trains will be operated at the increased maximum speed of 350 km/h along the high-speed rail line linking Beijing and Wuhan, Hubei province, which is part of the line connecting Beijing and Guangzhou, Guangdong province.

That will cut the travel time between Beijing and Wuhan to 3 hours, 48 minutes－a half-hour faster than now. The Beijing-Guangzhou line is one of China's major north-south corridors for high-speed trains.