CHINA How can China stop pork prices from going through the roof?

How can China stop pork prices from going through the roof? 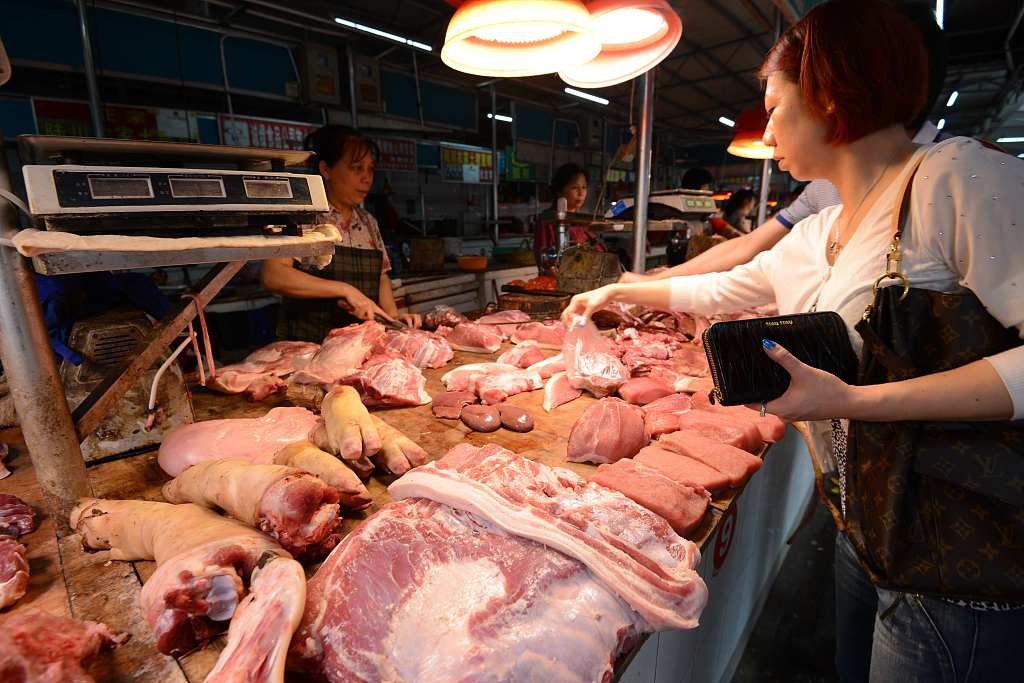 With the Mid-Autumn Festival and National Holiday around the corner, China's pork consumption is expected to be on the rise. But consumers in China face a problem inconceivable to many before – pork is becoming unaffordable.

According to the latest data published by the National Bureau of Statistics of China, pork prices soared 46.7 percent year-on-year in August, reaching 38.15 yuan per kilo on August 28, a steady increase from 25.13 yuan per kilo in early June.

The soaring pork price contributed to a 10 percent year-on-year jump in food prices last month, with China's CPI up 2.8 percent, according to the latest figure.

African swine fever, which ravaged the pork industry in China last year, resulted in a significant decline in pork supply and pushed up pork prices, said Pan Chenjun, executive director of food and agriculture research at Rabobank in Hong Kong, in an email interview with CGTN.

According to the Ministry of Agriculture and Rural Affairs, more than a million pigs have been culled in China in a bid to contain the disease.

Cutting back on meat consumption would not be easy for Chinese families who derive most of their protein from pork. China consumed around 55.9 million tons of pork in 2018, accounting for almost half of worldwide pork consumption. Imports constitute less than three percent of pork consumed in China, with the majority derived from hogs raised domestically.

Wang Jianping, a 45-year-old farmer from Chenjiazui in central China's Hunan Province, told CGTN that since the African swine fever ravaged his town, only around 100 pigs were left in the town of more than 20,000 residents. Due to the high risk of raising hogs, few farmers dared to relaunch their hog-raising business despite soaring pork prices.

"My brother had his 100 pigs all die as the African swine fever spread through the town," said Wang. "All he could do is to wait for subsidies from the government."

In the face of pork prices going over the roof, China is taking steps to increase pork supply and hold down the price. One way is to tap into the country's frozen pig reserves.

Last week, Guangdong became the latest province to tap into the frozen pig reserves. It announced that starting from September 7, it would release 1,600 tonnes of frozen pork into the market, sold at a ten percent discount.

"But those are temporary measures aiming to slow the pace of price increase," said Pan Chenjun from Rabobank. "Frozen meat inventory is not high enough to combat the price hike."

To get to the core of the problem, hog producers in China need to be incentivized to expand production. A series of measures aiming to encourage pig farmers to breed more hogs were rolled out since the end of August, including the offering of subsidies to build up hog production infrastructure, scrapping the land use restriction for hog breeding, etc.

The measures spurred optimism among some pig producers. A few farmers in Wang's town decided to move to remote areas to raise pigs, he told CGTN. The farmers would buy piglets from major hog producers, raise the piglets to maturity and then give them back to the corporations. In return, they are paid for their pig-raising services.

Wang Xueqiang said he saw many small producers sinking into debt when the African swine fever wiped out their pigs overnight. Large hog breeders, on the other hand, are more likely to have better disease prevention measures, better management of revenue streams and can thus maintain a stable output.

Partnering with major hog producers to scale up production would help pig farmers in China respond to the crisis. By learning hygiene requirements and disinfection procedures from major pig breeders, the risk of African swine fever at small backyard farms can be reduced to a minimum level, said Wang Xueqiang.

At a Wednesday press conference, Yu Kangzhen, Vice Minister of the Ministry of Agriculture and Rural Affairs, said that a two-pronged approach would be pursued, maintaining a stable pork price and putting the African swine fever under control.

China now already requires relevant departments to provide daily update on new African swine fever case, and is looking into cases of delays in and under reporting of the issue.

But since there is no African swine fever cure or vaccination, "one must be prepared for a long fight," Wang Xueqiang cautioned.