CHINA How China overcame trials for a bullish 2021

How China overcame trials for a bullish 2021 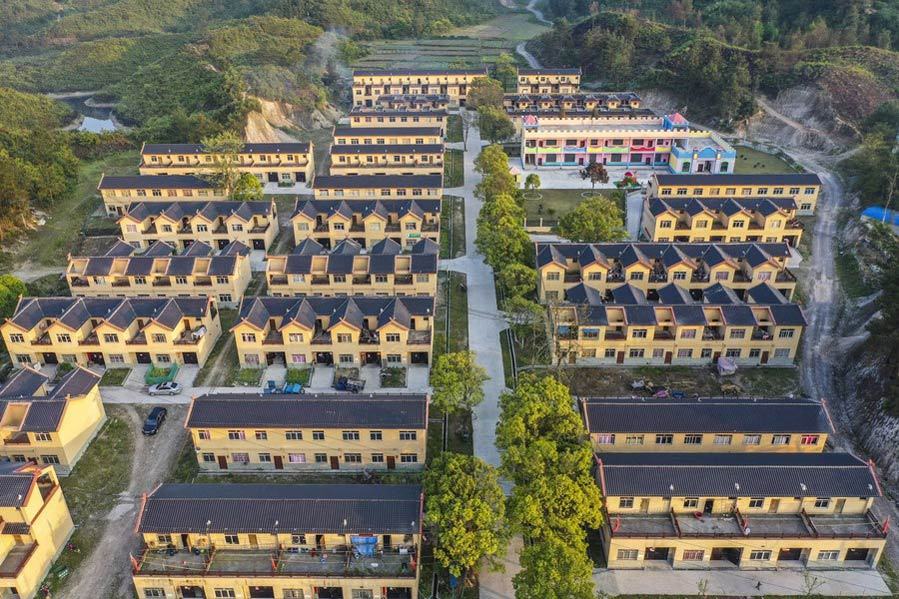 BEIJING, Jan. 1 (Xinhua) -- The Chinese word for "crisis" (wei ji) is composed of two characters: "danger" (wei) and "opportunity" (ji), and the wisdom to avert a crisis is always somewhere in between.

As the new year kicks off, the very "danger" from 2020 has largely departed China, where the extraordinary year ended with a newly-approved vaccine -- a further step to tame the pandemic -- and the completion of investment agreement negotiations with the European Union -- a boost to world economic recovery. 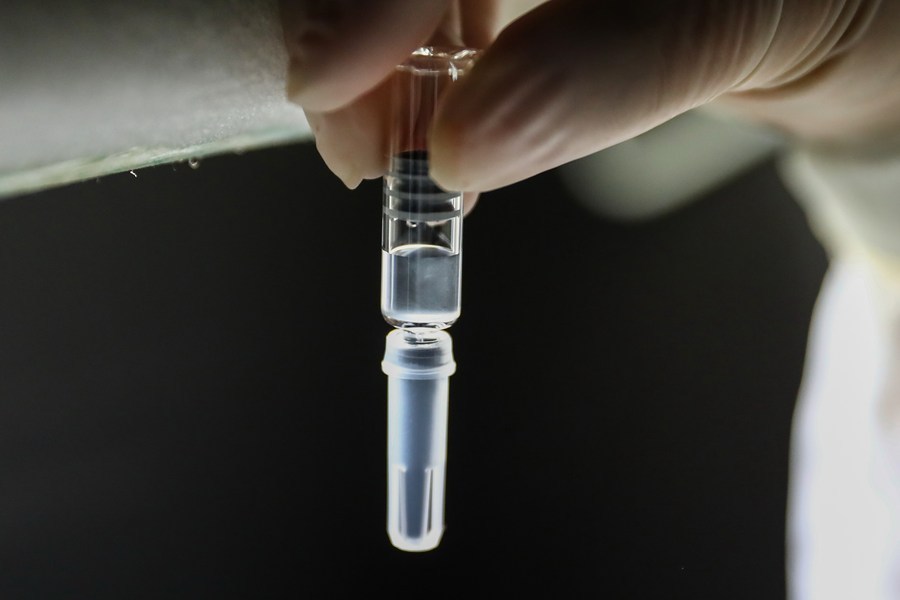 Despite the unpredictable outbreak of the coronavirus, the unprecedented recession worldwide, and the unhinged bully from the outside, China became the first major economy in the world to register positive growth, and its GDP is expected to exceed 100 trillion yuan (about 15.38 trillion U.S. dollars) in 2020, a solid ground to embark on a new journey of modernization in a new year that marks the centennial of the governing Communist Party of China (CPC).

But it was quite an unintended story at the beginning of 2020, as an unknown pathogen, whose exact origin and jump to humans have yet to be scientifically concluded, was in circulation.

It was the annual peak travel season for hundreds of millions of Chinese citizens. People fell sick and many tragically succumbed to what later became known as the COVID-19 pandemic. Those were confusing and agonizing days for everyone and led to sleepless nights for the Chinese leadership.

Resolute action followed. In an unprecedented but crucial move, Wuhan, a megacity of 11 million, cut off outbound flights and trains. Residents across China voluntarily complied with social distancing requirements. The world's second-largest economy nearly came to a halt -- a loss of 150 billion yuan in economic output every day, but a price worth paying as human lives are of the utmost importance. Medical workers, scientists, community workers, volunteers, construction workers and many others jumped to action.

"Greatness is forged in the ordinary, and heroes come from the people. Every single person is remarkable," Chinese President Xi Jinping said in a televised New Year speech on Thursday.

Under decisive leadership from Beijing, China prevailed in the battle against the epidemic. The local transmission of coronavirus all but vanished, to the extent that a domestic vaccine trial is now infeasible as there are insufficient numbers of patients. The trials are well underway in cooperation with some foreign countries.

The industrial output was the first to rebound from the shock. Its manufacturing proved reliable for not only China but also other countries, particularly when the need for masks and ventilators presented itself. Nearly 300 million Chinese students returned to campus in September, free from fear. 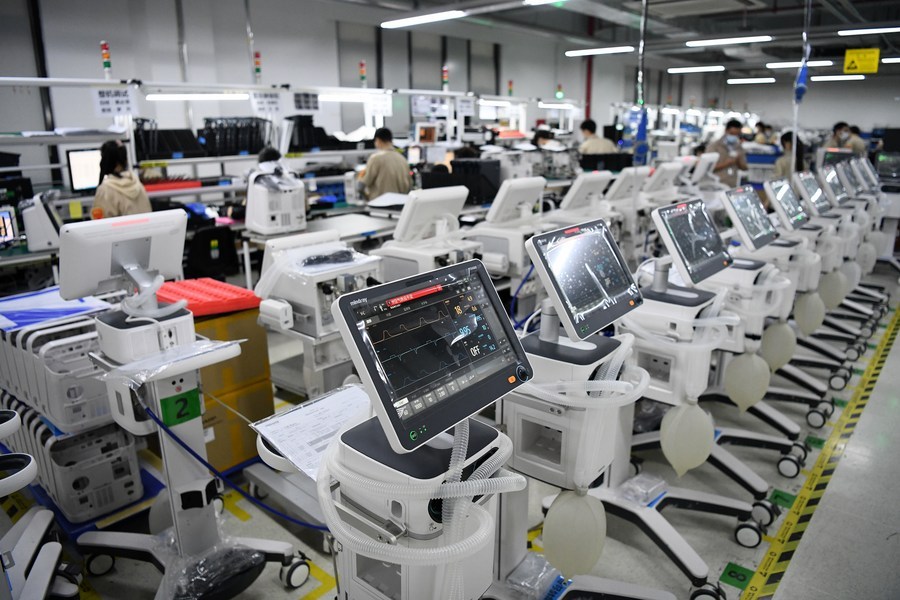 That does not come easily. Beijing used extraordinary policy tools, including an additional one trillion yuan in deficit spending, one trillion yuan in special treasury bonds and 2.5 trillion yuan in tax and fee cuts. The government rolled out incentives and long-term plans to unleash the potential of its domestic demand, with 400 million middle-income earners, an anchor for the economy to offset downward pressure. China has also acted more forcefully to stabilize employment -- keeping the world's biggest population in work is vital for stability, socially and economically.

The epidemic was not the only battle that China fought in 2020.

The country was also racing against the clock to reach the historical feat of eradicating absolute poverty. In 2020, all of China's nearly 100 million impoverished rural residents living below the current poverty line have shaken off poverty after eight years' efforts.

China is still the largest developing country in the world. The decisive victory against poverty is the beginning of an even more challenging and promising drive: socialist modernization.

Externally, the year 2020 has witnessed the U.S. administration's increased hysteria toward China, piling one unreasonable sanction on another, targeting Chinese companies and officials and daydreaming about a decoupling.

Beijing responded with a firm and commensurate counteractions, and, most conspicuously, with greater reforms and openness to the outside world.

The more blockades and suppression China faces, the more it must insist on open cooperation, Beijing reasons. 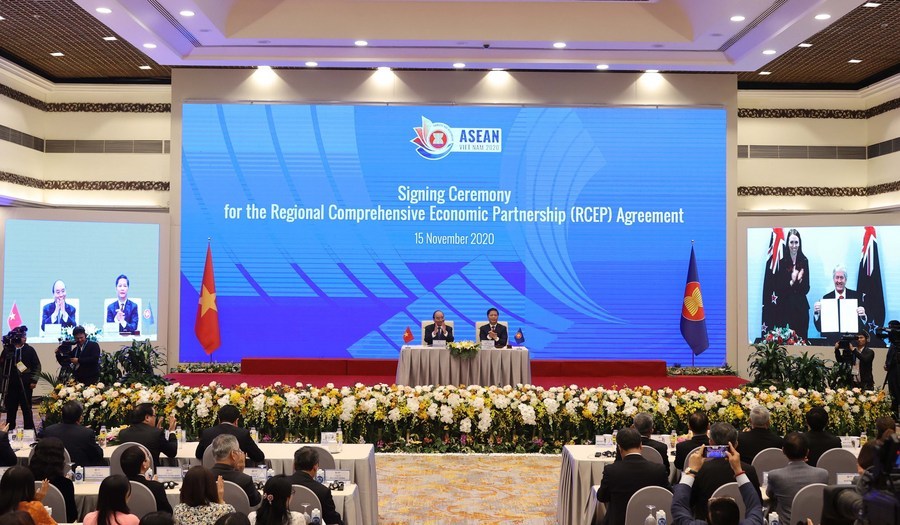 The signing ceremony of the Regional Comprehensive Economic Partnership (RCEP) agreement is held via video conference in Hanoi, capital of Vietnam, Nov. 15, 2020. (VNA via Xinhua)

However, a bumpy ride is ahead. Han Wenxiu, a senior economic official, said while economic growth for 2020 and 2021 would average around 5 percent annually, the numbers are good but the days aren't necessarily so; on the micro-level, many small and medium enterprises still need supports; and some of provincial-level regions have a current shortfall in the basic pension fund.

Thinking ahead and playing the long game has been characteristics with Beijing. In late October, a key CPC meeting proposed key outlines for China's next five years and its vision for 2035, mapping out critical targets identified by leadership.

Among them are the upgrading of manufacturing, breakthroughs in core technologies, coping with an aging population, and resolving systemic financial risks. "Stay vigilant in times of peace," a Chinese saying teaches.

The Chernobyl moment predicted for China at the beginning of 2020 did not materialize. Extraordinary hardship had allowed the Chinese people to demonstrate their resilience with more confidence in their way of life and the country's governance model.

2021 is also the year that will see China formulate and begin to implement the 14th Five-Year Plan (2021-2025) for National Economic and Social Development -- "embark on a new journey to fully build a modern socialist country," Xi said on Thursday.

China, a country of 1.4 billion -- one-fifth of the world's population -- has seen light in the tunnel through the pandemic. And its peaceful development by putting overwhelming emphasis on improving the living standards and happiness of its own people -- rather than looting, colonization, or wars -- stands as a promising alternative path to others in the world.

The eventful year has also been a reminder of the importance of a community with a shared future for humanity. It has become clear that people's lives and prosperity depend on unknown strangers in far-off corners of the world.

In the words of British poet John Donne, "No man is an island entire of itself; every man is a piece of the continent, a part of the main."