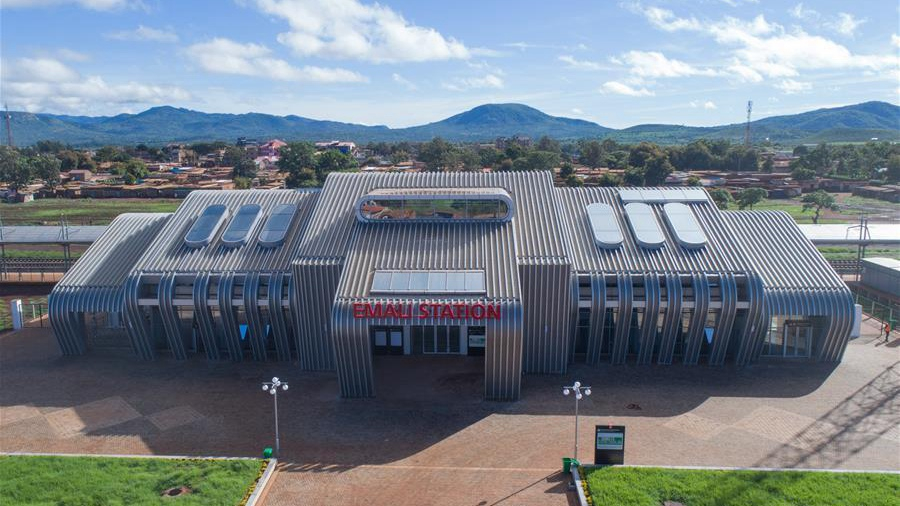 Photo taken on May 10, 2017 shows the Emali station on Kenya's Mombasa-Nairobi Standard Gauge Railway (SGR), which was built by the China Road and Bridge Corporation. (Photo: Xinhua )

The upcoming Second Belt and Road Forum for International Cooperation (BRF) in Beijing will be attended by some 5,000 participants from more than 150 countries and 90 international organizations, including heads of state and government from 37 countries, the secretary-general of the United Nations and the managing director of the International Monetary Fund, Chinese State Councilor and Foreign Minister Wang Yi announced on Friday.

The numbers show a significant growth in the popularity of the Belt and Road Initiative (BRI), compared with the first BRF two years ago. The number of participants in the first BRF was about 1,500, including heads of state and government from 29 countries.

Proposed by Chinese President Xi Jinping in 2013, the BRI comprises the Silk Road Economic Belt and the 21st Century Maritime Silk Road, and aims to build trade and infrastructure networks connecting Asia with Europe and Africa along and beyond the ancient Silk Road routes.

126 countries on board in over five years

It took five and a half years for that number to grow from zero to 126 – a remarkable achievement for a brand new cooperation initiative. By the end of 2014, China had signed BRI cooperation documents with nine countries. The number increased to 27 by the end of 2015.

Before the first BRF in May 2017, the number was 36, and 11 more countries inked BRI cooperation documents during the forum, including Mongolia, Pakistan, Nepal, Croatia, Montenegro, Bosnia and Herzegovina, Albania, Timor-Leste, Singapore, Myanmar and Malaysia.

Last year saw the biggest surge in worldwide enthusiasm in BRI cooperation, with 66 countries officially coming on board. The momentum has continued this year: Italy became the first G7 nation to sign a memorandum of understanding (MoU) with China on BRI cooperation in March.

Guided by the principle of consultation and cooperation for shared benefits, the BRI "champions mutual respect, consultation on an equal footing, openness and inclusiveness, and mutual benefit," Yang Jiechi, member of the Political Bureau of the Central Committee of the Communist Party of China and director of the Office of the Central Commission for Foreign Affairs, said in a recent interview.

"The BRI has proved a popular and worthy cause that goes along with the trend of our times," he said, noting that the China-proposed initiative has opened a new area for international cooperation in the context of rising protectionism and unilateralism.

It embodies China's commitment to "sharing development opportunities and outcomes with more countries in the world," he added.

The second BRF will give another boost to the BRI's popularity. Among the 37 countries that will be represented by heads of state or government at the forum, only Cyprus and Switzerland have not signed BRI cooperation documents with China. Will they do so in Beijing?

From Asia to every inhabited continent

Like the land-based and maritime Silk Roads in ancient times, the BRI originated in Asia and then began to extend to other parts of the world.

In September and October 2013, President Xi raised the concepts of the Silk Road Economic Belt and the 21st Century Maritime Silk Road during tours in Kazakhstan and Indonesia respectively.

But Asia is not the continent with the largest number of BRI partners. With 36 countries signing BRI cooperation documents with China, Asia has been outnumbered by Africa, where the number has risen to 37 thanks to the 2018 Beijing Summit of the Forum on China-Africa Cooperation (FOCAC). Last year, 34 African countries endorsed the initiative, among which 28 inked the MoUs during the FOCAC summit.

Meanwhile, other parts of Europe are also getting on board, with countries such as Austria, Portugal, Italy and Luxemburg signing BRI cooperation documents. Notably, Italy was the first major developed country to endorse the initiative.

While the number of BRI partners continues to grow, countries involved are shifting their focus from quantity to quality in cooperation under the initiative. According to Foreign Minister Wang Yi, the second BRF is intended to promote the high-quality development of Belt and Road cooperation.

"I believe that the forum will inject stronger impetus into the world economy, open even broader horizon for the development of the countries, and contribute to the building of a community with a shared future for humanity," Wang noted at a press briefing.