CHINA How did COVID-19 patient leave Wuhan for Beijing?

How did COVID-19 patient leave Wuhan for Beijing? 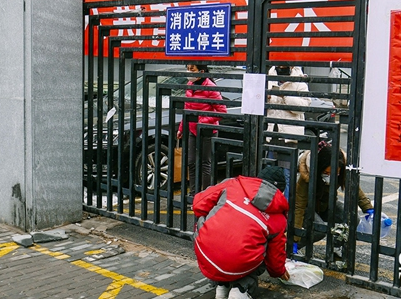 Deliveryman passes a package to a resident through locked gate in Beijing on February 5. (Photo: Global Times)

A confirmed COVID-19 patient returned from Wuhan on Saturday to Beijing, leading to questions over the management of the Wuhan government again two days after it issued a traffic easing policy but retracted it hours later.

Such questions against Wuhan government have lurked on Chinese social media for days, as the central government repeated that channels to and out of Wuhan must be strictly controlled to win the battle against the epidemic.

The woman, surnamed Huang, was found on Monday in a residential community in Dongcheng district. She came to Beijing from Wuhan on Saturday and underwent inspection right after her arrival, as she had been suffering intermittent fevers and throat pain since February 18 in Wuhan, said the Beijing Center for Diseases Prevention and Control on Wednesday.

Hubei authorities launched a thorough investigation on Wednesday night to look into the matter.

An insider told yicai.com that the woman is an ex-convict who had just been released from a Wuhan prison and was diagnosed in Wuhan. As she was from Beijing, after being released from prison, her family drove her back to the capital in a car.

The issue triggered heated discussion on Chinese social media with netizens questioning why she was able to break through the walls of Wuhan and ride to Beijing with her relatives?

The epidemic situation in Wuhan and Hubei is still complex and if the spread of the virus is not curbed, it could put the previous efforts in vain and lead to a virus resurgence, experts warned.

Wuhan residents have to submit an application and get it approved by the epidemic prevention and control authority before getting a pass to leave Wuhan, a staffer at the Wuhan Traffic Management Bureau told the Global Times on Wednesday, adding that approval will only be given to residents with special needs.

Several other cities in the province have put stricter limits on routes out of town.

The moves came after Wuhan issued and retracted a traffic easing policy within three hours on Monday, which was criticized by experts and netizens as "irresponsible" and "over-optimistic" in relation to the epidemic situation.

Nearly 2,000 people were said to have left Wuhan during the three hours for their neighboring city, Changsha, which was refuted by Changsha authorities as a rumor on Tuesday night.

Jingzhou, one of the locked down cities in Hubei, announced plans to suspend issuing passage permits to all personnel and vehicles from Wednesday afternoon. Previously issued permits will be nullified and those who are on their way out will be persuaded to return.

The government of Shiyan, another city of Hubei, also vowed to strictly guard every single road that can go out of the city. The inter-city roads shall continue to strictly implement the current control measures, which only allow vehicles for epidemic prevention and control, daily necessities, and emergency rescue.

Previously, residents of Jingzhou could drive out of the city after they applied for permits online with a health certificate from their local community and certificates obtained from a destination community. The permits were not open for people diagnosed as confirmed or suspected cases or who had close contacts with confirmed patients.

A Jingzhou government official told Global Times on Wednesday that he used to approve a maximum of 2,000 passing permits per day, but now no one can leave the city.

"The large number of approved permits is quite shocking. Local government officials are the most important personnel in the battle against the virus spreading, and they should strictly guard their positions, preventing the lockdown from being a mere formality," Wang Hongwei, a professor at Renmin University of China's school of public administration and policy, told the Global Times.

Preventing people from leaving Wuhan and Hubei was a great achievement made in the previous stage by the nation, and relates to the confidence and optimism of the entire society over epidemic control in the future, experts noted.