CHINA How far are we from universal first aid training, adoption of life-saving AEDs

How far are we from universal first aid training, adoption of life-saving AEDs

Medical emergency coordinator Yan Liying received a call at 6:30 p.m. The caller said his father passed out, and his breath became very weak. She immediately sent Dr. Wang Guan and several nurses to the patient's home, and it took nearly 16 minutes for the ambulance to get there. 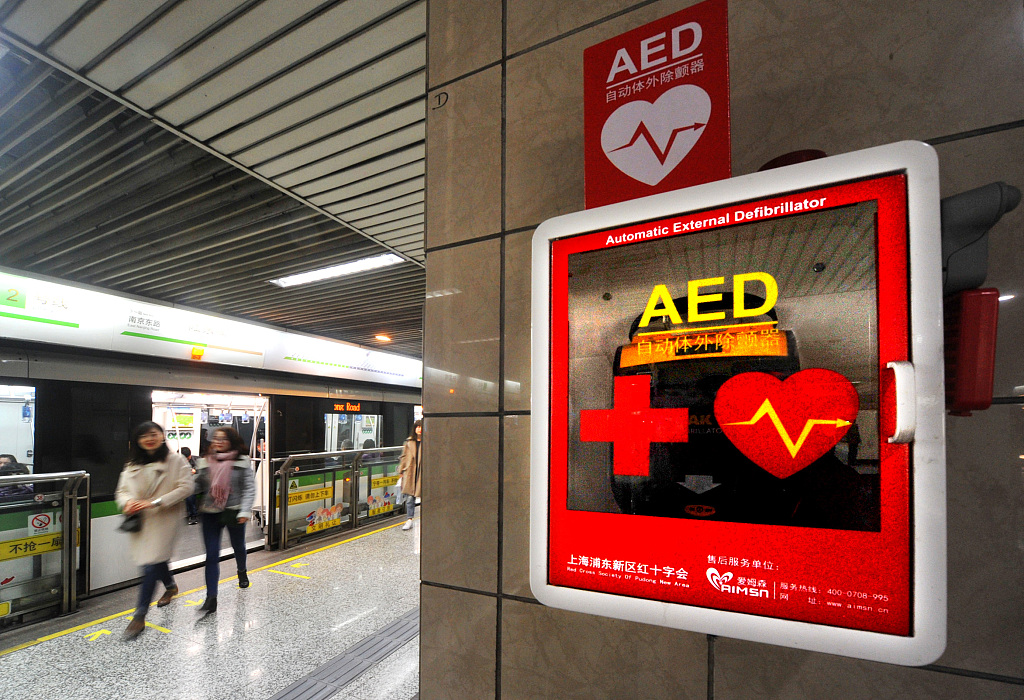 "On the way to the patient's home, I spoke to the patient's family on the phone, and they told me that the patient was no longer breathing and had no heartbeat. I was concerned that he might not be saved anymore even after I got there," Dr. Wang said.

After arrived, Wang found out that the patient had no heartbeat, pulse, and breathing anymore, and his pupils began to dilate.

Without declaring death, Wang, the ambulance driver, and the stretcher carrier took turns doing CPR to the patient for more than 40 minutes. The patient also underwent five times of defibrillation with an automated external defibrillator (AED).

The patient finally came through and recovered heartbeats. Yan, the coordinator said it's almost a miracle.

"When a sudden cardiac arrest occurs, performing CPR within four to six minutes and using AED can highly improve the probability of saving one's life, but in Wang's case, it took him 16 minutes to get there," Yan said.

Most die due to lack of first aid rescue

It's a tragic event that due to the lack of CPR training and AED equipment in public places, most of the victims don't survive – in fact – only about one to two percent of Chinese do.

Experts say if bystanders intervene by giving CPR and using an AED immediately, survival rates from suffering a sudden cardiac arrest can triple.

During the seven-day National Day holiday, nearly half of the Chinese traveled across the country, and many scenic spots were packed with flooded visitors. To avoid death triggered by sudden cardiac arrest, public places in some tourist cities are equipped with AED, and first aid kits.

In Shanghai, the Wild Animal Park, Shanghai Science and Technology Museum, and other scenic spots were equipped with AED, and tourists and residents can find nearby AEDs by using the map service on their mobile phones. Many high-speed service areas in Zhejiang Province and scenic spots in Beijing, Hangzhou, Nanjing, and other cities have also been equipped with the life-saving equipment.

Nationally, China only gets about 20,000 AEDs in place though it has sped up in recent years to add more AEDs and provide first aid training for the public after medical experts in many provinces called to do so.

"AED should be equipped in densely populated places, but during the process of equipping, there are many difficulties, such as money. Once the machine is equipped, it costs money and human resource to maintain. Who is responsible for paying that money?" Zhou Rongbin, a member of the Red Cross Society of China's rescue advisory committee, told CCTV.

According to the Guangdong Red Cross Society, it takes about 20,000 yuan to 30,000 yuan to buy an AED, and its battery should be changed in two to three years. And once the machine is used, its electrode patches must be replaced, which would also cost thousands of yuan.

So far, AEDs in Guangzhou are all equipped by Guangdong Emergency Response Association, and they've claimed that they cannot make the machine available across the province, which requires at least 22,000 to be equipped.

Chen Ruibin, vice president of the association, told Xinhua news that most of the money for equipping AEDs in Guangzhou comes from donations of welfare organizations, companies, and individuals, but relying on the donations can barely support such a grand project and equipping adequate AEDs across the province requires the government to act in.

The plan proposed that at the end of 2030, at least three percent of the Chinese should have first aid training certificates, and at least one ambulance should be equipped for 50,000 people.

The public needs to be trained

In China, there are as many as 550,000 sudden cardiac deaths every year, meaning one person dies per minute due to cardiac arrest, according to the National Center for Cardiovascular Diseases (NCCD). About 60 percent of these deaths occur outside hospitals, and the survival rate of a patient who received the CPR outside the hospital is less than 4.5 percent.

One of the reasons behind the low survival rate is that many don't know how to conduct first aid and use an AED. In the case without universal first aid training, even if AEDs are equipped across the country, the number of victims who died of cardiac arrest outside hospitals wouldn't decrease.

AEDs are designed to be used by laypersons who ideally should have received AED training, but experts say it's okay if one doesn't know how to use it, and the most important thing is to stand out and use the machine as it's simple to use.

Once the bystander opens the case and turn the device on, the machine will automatically start to give voice prompts instructing him/her what to do. And the electrode patches will examine the victim first, and if the victim doesn't need defibrillation, the machine won't be charged and work.

Some others are also concerned about the legal problem - what if I hurt the victim during the process of conducting first aid. Legal experts say the civil code clearly regulates that the person who performs first aid out of kindness but causes damages to the victim shall not bear civil liability. But they also warned that the law doesn't mean encouraging people without professional training to save others, which may cause second harm to the victim. So, the public should be trained.

In August this year, China's Ministry of Education has asked all public schools to teach students first aid and cardiopulmonary resuscitation (CPR) as part of children's health education to address the problem.

According to The British Red Cross, "up to 59 percent of deaths by injury could be prevented in the UK if first aid was given prior to the arrival of medical services."