A group of Chinese and foreign filmmakers shared their stories and what they had witnessed during time on the frontline when China was first fighting the COVID-19 pandemic. This took place at a forum held during the 23rd Shanghai International Film Festival (SIFF). 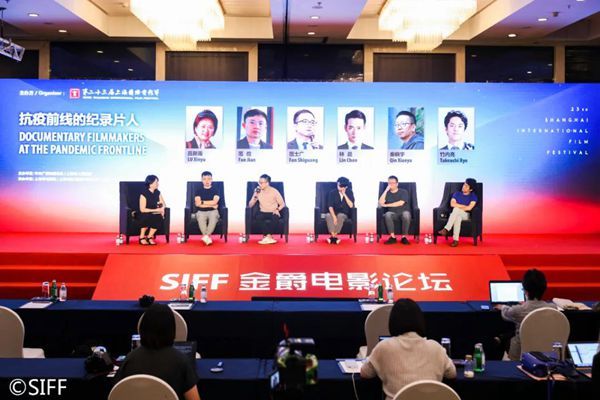 Documentary filmmakers share their stories about the COVID-19 frontline in Wuhan, Hubei province at a forum entitled "Documentary Filmmakers at the Pandemic Frontline" held during the 23rd Shanghai International Film Festival, July 28, 2020. (Photo courtesy of SIFF)

As Wuhan was locked down on Jan. 23, it was the most extraordinary Spring Festival for those involved to confront a sudden outbreak of COVID-19. On the evening of Chinese New Year's Eve, a group of documentary filmmakers were carrying cameras with the medical teams to aid Hubei province in tackling COVID-19.

Takeuchi Ryo, a Japanese documentary director, was one of these. He made two documentaries "Fight Against COVID-19 Pandemic in Nanjing" and" Long Time No See, Wuhan."

Different from other documentary makers focusing on the theme of the virus, he predefined his audience including not only Chinese and Japanese people, but also viewers all over the world. The director himself also took the leading role as narrator and interviewer, speaking either Chinese or Japanese.

"My Japanese friends have a lot of prejudice against Wuhan. As a foreigner living in China, and as a documentary director, I especially wanted to film Wuhan and introduce the real Wuhan to the world," he said at the forum entitled "Documentary Filmmakers at the Pandemic Frontline."

Takeuchi Ryo selected 10 out of 100 netizens recruited through Weibo for shooting the "Long Time No See, Wuhan." He made friends with them while telling stories as a Japanese man in China, and presented the most objective record in telling the world what truly happened in the city.

"Long Time No See, Wuhan" later was well received online with more than 30 million views, helping to change the impression of many foreigners about Wuhan. He generously expressed his love for Wuhan and China as a whole.

"I hope that through our works, we can get rid of foreigners' prejudice against Wuhan, and our recording will go on and on, because this is the most important moment," he said.

For filmmakers who went to the frontline wearing the protective clothing and experiencing a grim struggle in the first line of treatment together with medical workers, they sometimes found themselves knocking on the doors of ordinary citizens in Wuhan and recording their daily life in the midst of the unusual time.

Alternatively, they hung about on the streets of Wuhan with mobile phones and unmanned aerial vehicles (UAVs), recording while walking; even some foreigners with a special affection towards Chinese culture decided to tell the world a real Wuhan behind the lens.

Fan Jian, a veteran documentary director and winner at the Amsterdam International Documentary Film Festival, has had abundant experience in making documentaries on major events, including "The Next Life" and "Ten Years: Forget Me Not" which placed stories about the 2008 Wenchuan Earthquake under the camera.

In March this year, Fan and a group of journalists headed for Wuhan, and chose the residential community of Baibuting, epicenter of the COVID-19 epidemic as their base. They shot stories reflecting neighborhood relationships to create a montage of images that made up a complete product, "The Lost Spring."

Fan intentionally "stepped back" a little in Wuhan this time. "It never occurred to me that I should shoot the video in hospitals, and I insisted I had to incorporate daily life into my work, because little attention had been paid to the life of ordinary Wuhan citizens at the onset of the virus, or the impact on interpersonal relations.

"It is not what a documentary would normally look like, nor does it constitute the perspective of news reporting. However, I made up my mind to go into the community, which in return gave me wider space of production."

However, his idea confronted incredible barriers. "Many people refused to be filmed, because our shooting was going to take place in their home, and the long time involved would invade their privacy. The character appearing in the documentary needs to be a confirmed patient, or a family member of one. Of course, when he appears in front of the camera, it means he has to expose himself to the public. He must be courageous enough to permit filming. After receiving countless rejections, we finally got a nod."

Fan Shiguang, another filmmaker who used to be a reporter at the beginning of his career, established an attitude that, "I must go to the frontline of news reporting, where I'm going to tell you what happened." Before that, the documentary "Life Matters" in which he was chief director had attracted extensive social attention.

This time, he decided to focus again on the medical staff fighting against the virus on the frontline, except that he intentionally abandoned the broader ups and downs, but paid more attention to the individual feelings.

"I believe, in the face of particularly serious disasters, personalized narratives and experience must be the backbone of the stories, which bring the audience to understand the days through which these individuals passed. When we look back some years later, they become more valuable as the proof of history. Therefore, we made a plan of interviewing 100 people, and we did the work till the last day of our stay in Wuhan."

In his opinion, documentaries are powerful, since they present the complexity of the world and human beings while naturally showing "the reality and our era," he said at the forum.

There are also amateur filmmakers to document the unprecedented pandemic. Lin Chen, a Wuhan native, is a typical example as a Vlogger, and he is also famous on the Bilibili video site. In regard to the physical lockdown of the city, he produced a series of short videos for "Wuhan Diary" with his mobile phone and UAV, which offered footage of Wuhan during the earliest days of the outbreak. These videos were extensively shared on the internet, igniting hot discussions.

Lin did not define himself as a documentary director in view of his "non-professional" background. However, Lin Chen's use of UAV presents a very interesting narrative perspective, separate from traditional documentaries.

The objective perspective of UAV in traditional documentaries has turned into a personal subjective perspective in "Wuhan Diary." Lin explained, "I wanted to explore this matter from my perspective, so I first produced my narration, recorded the take-off of the UAV, and established a connection turning what the UAV recorded into what I see."

Also, the initiative "One More Day" by Qin Xiaoyu, a director, poet, literary critic and founder of MeDoc, is casting the light on all aspects of life and trying to gather different perspectives altogether.

At the forum, he said his attempt had been of enlightening significance, adding "the recorders will suddenly come to realize that the life they have recorded is so meaningful, the recorded film is history itself, and they are the compiler of history."