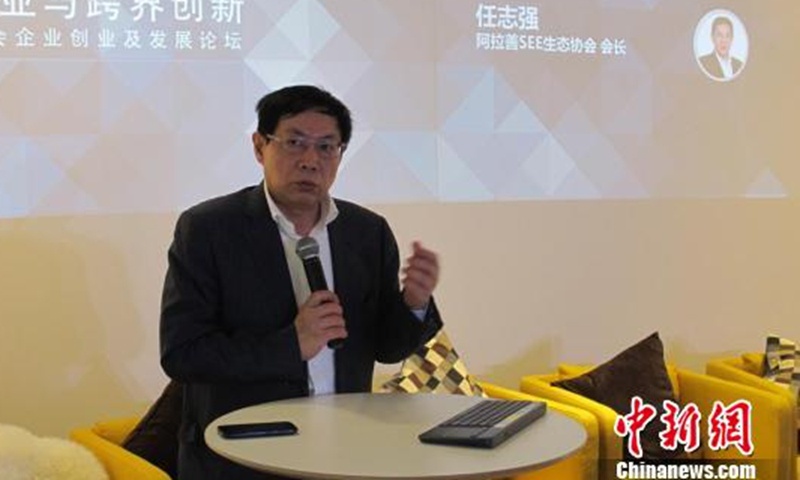 On September 22, former property mogul Ren Zhiqiang was sentenced to 18 years and fined 4.2 million yuan ($620,000) for corruption, taking bribes, embezzlement of public funds, and abusing his power during the time as he served at a state-owned company.

How did Ren end up committing such serious crimes involving more than 200 million yuan as head of the Huayuan Group over a period of almost two decades?

According to a statement published by the Beijing No.2 Intermediate People's Court, between 2003 and 2017, Ren took advantage of his position to embezzle more than 110 million yuan in public funds, took bribes totaling more than 1.25 million yuan, abused his power and caused particularly heavy losses of more than 100 million yuan to a state-owned holding company. Ren did not appeal his sentence.

Illegally amassing wealth with his son

The court found that Ren had embezzled more than 49.74 million yuan in public funds, of which 36.4 million yuan was a "financial consultant's fee" paid to his son.

In 2014, due to the decline in interest rates on the loan, Beijing Huayuan Real Estate Agency Co. renewed a loan for 1.3 billion yuan from Kunlun Trust Company. After learning of this, his son took advantage of Ren's position to ask for another "agent service fee." To help his son earn the fees, Ren signed a fake steel bar supply contract worth 13 million yuan and paid the money to his son.

Jiao said when she reported the transgression to Ren, she clearly told him that there was no precedent for the company to pay service fees, and that the money should not be given to his son. But Ren still agreed to pay.

The court ruled that Ren had committed the crime of corruption.

In addition to illegally possessing a huge amount of public funds with his son and others, after retiring Ren received 13.34 million yuan over the limit of his salary during his tenure with the company, which also constituted the crime of corruption.

In May 2008, Beijing's Xicheng district set limits to the salaries of managers of state-owned and state-holding enterprises.

Pocketing company profits as his own

The court found that Ren committed four crimes, and embezzlement was committed at the earliest time.

In September 2002, during shareholding reforms of Huayuan Real Estate Company, Huayuan Group and staff of its affiliated company jointly invested and established Beijing Huayuan Haoli Investment and Management Center, through which staff could hold stock in Beijing Huayuan Real Estate Agency Co. As a shareholding platform for staff, the division of the State-owned Assets Supervision and Administration Commission (SASAC) in Beijing's Xicheng district clearly claimed that Haoli center could not engage in other operating and investing activities, nor borrow or loan funds to Huayuan Group, Huayuan Real Estate Company or other firms.

Though Ren clearly understood those rules, he ignored them multiple times. In August 2003, with other partners, Ren borrowed on behalf of Haoli center, 11.2 million yuan from Huayuan Yingdu Real Estate Development Co. Ltd. to allow the center to invest in an apartment project under Huayuan. Haoli pocketed about 92 million yuan from the project, from which Ren gained profits of 19.24 million, and kept 15.39 million yuan after tax.

In September 2003, Ren embezzled 30 million yuan from Haoli to purchase stock owned by Huayuan in Haoli for himself and other staff. This made Haoli a place where Ren used Huayuan Real Estate to distribute dividends successively about those 30 million yuan.

The court also found that Ren violated regulations and abused the power, which led to losses of about 117 million yuan in the state-owned company. These crimes netted Ren profits of about 19.4 million yuan.

Huayuan Group cooperated with many equipment suppliers, including one controlled by an individual surnamed Zhao.

From 2004 to 2014, Ren offered some convenience to Zhao's firm on equipment supply, and received a payment for housing decorations worth more than 1.25 million yuan from Zhao.

The property was located in Beijing's Taiyanggong area, and the renovating work lasted several years. Ren's wife said every time the decoration firm purchased a batch of materials, she would inform Ren who then asked Zhao for payment.

There were five payments to Ren, according to accounting by Zhao's firm. Zhao's secretary said that the firm began providing equipment to Huayuan in 2000. To maintain a long-term partnership, Zhao provided Ren's home decoration fees.

Ren had been expelled from the Communist Party of China and had his illegal gains confiscated, according to a district discipline watchdog in Beijing on July 23. Born in Yexian county in East China's Shandong Province, he joined the army in December 1969 and served in the military until October 1981, according to his resume. He joined the Communist Party of China in April 1974.