CHINA How to find a rainbow? Ask Xinjiang

How to find a rainbow? Ask Xinjiang 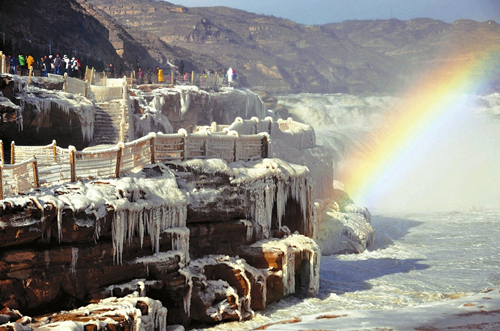 A rainbow arches over Hukou Waterfall on the Yellow River in Jixian county, Shanxi province, Dec 11. The frozen waterfall and handrails at the scenic area have attracted many visitors and photography enthusiasts. [Photo/Shanxi Daily]

A meteorological bureau in the Xinjiang Uygur autonomous region plans to issue rainbow forecasts to the public starting in June next year after it has found a way to predict the beautiful meteorological phenomenon in the area. The "rainbow hunters" of the bureau hope the new element of weather forecasting will add more color to people's lives.

"We've been working hard to collect enough data as we've studied the pattern of rainbow appearances since May 2017," said Wang Yuan, deputy chief of the meteorological bureau of Zhaosu county, Ili Kazak autonomous prefecture, and the leader of the seven rainbow hunters. "The internal trial has been a popular success."

The county, which is known for its vast grassland and as the home of fine horses, is surrounded by mountains. Its average altitude is 2,018 meters. Because of its location, convective weather conditions often occur near the mountains on the northwest side of Zhaosu during its brief summer - from June to August - and often bring thunderstorms.

When thunderstorms happen and sunlight shines from behind the observer at a low angle, such as during a sunset, a rainbow will appear. So the team will first determine if and when thunderstorms are on the way before analyzing other necessary factors for a rainbow to appear, such as the time of sunset and the air quality, she said.

Although the team has been trying its best to chase rainbows and record rainbow-favoring weather conditions when they appear, it often found that the phenomenon had passed by the time they arrived.

"Our challenge is that rainbows cannot be monitored by any equipment; they can be only observed by people's eyes," she said.

To collect enough data to study the patterns of rainbows, Wang and her team have been asking residents, including herdsmen, to take pictures of the rainbows they see and to record the time and location.

Since the effort began last year, the team has drafted two forecasts for rainbows - at 11 am and 7 pm daily - during the summer months.

"The accuracy of the 11 am forecast can reach 60 percent, while the 7 pm one can reach 90 percent because it's closer to the time of sunset in the county," Wang said.

In Zhaosu, rainbows may appear as many as 20 times or more in July and normally happen around 9 pm. What's more, 90 percent of the rainbows are doubles - the result of high visibility. That's why the county calls itself the "land of the rainbows", Wang said.

"We are working on improving the accuracy of rainbow forecasts, including when and where they will appear, before the service can be provided to the public," Wang said. "We hope the forecast can add joy to people's lives."

Forecasting rainbows can be a challenge, as thunderstorms come and go quickly and people have to be at the right spot to see a colored arch. They're even harder to forecast nationwide because weather conditions vary widely, Zhang Tao, a forecaster at the National Meteorological Center, told www.weather.com.cn.