President Xi Jinping on Monday extended festive greetings to children across China ahead of International Children's Day, which falls on June 1.

When writing back to members of the Chinese Young Pioneers (CYP) at a primary school in east China's Jiangsu Province on Sunday, Xi, urged them to learn the Party's history and to have firm faith in following the Party from a young age.

In the past years, Xi has visited primary and secondary schools. Here are some stories about Xi putting children's development in a prominent position. 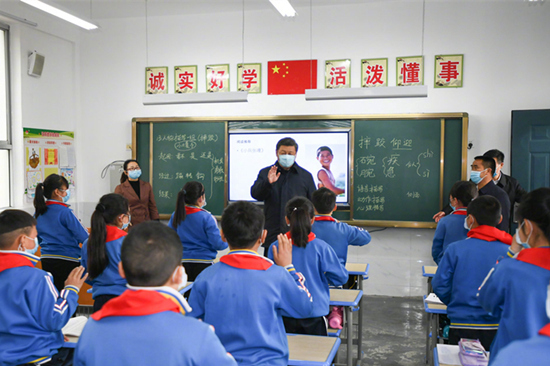 With COVID-19 basically under control domestically, Xi emphasized the importance of reopening schools at a meeting of the Standing Committee of the Political Bureau of the Central Committee of the Communist Party of China (CPC) on April 29, 2020. He urged schools to assume primary responsibilities and ensure the physical and mental health of teachers and students.

The fourth- to sixth-graders already resumed classes on April 20, the day before Xi's visit.

Walking into the classrooms, Xi was greeted by the students. He asked about their study and life.

"Now eyeglasses have become common among students, which is one of my growing concerns," Xi said.

"Besides, due to lack of physical exercise, students' physical fitness has also declined. One should be cultured in spirit and wild in bodies. By 'wild,' I mean physical fitness."

Xi then inspected virus prevention and control work in the school canteen, urging staff members to strengthen disinfection of key places in the school to provide a safe environment for resumption of classes. 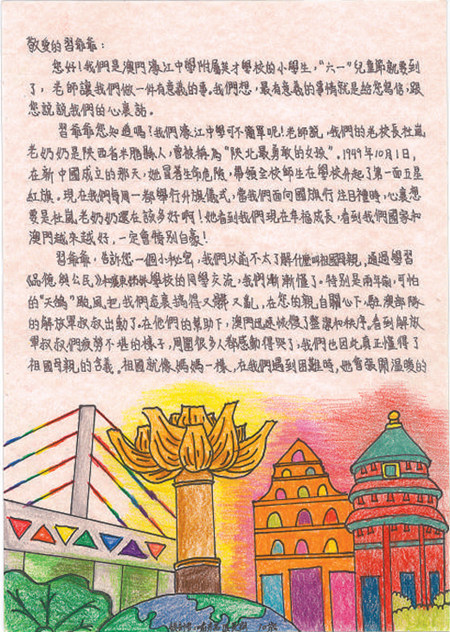 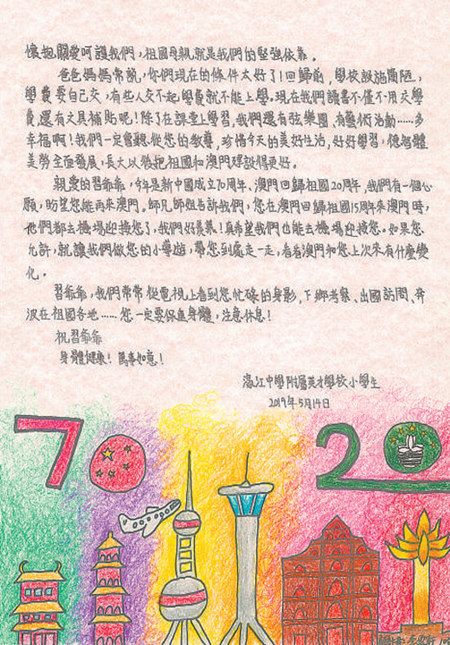 President Xi receives a letter from pupils of the Premier School Affiliated to Hou Kong Middle School in South China's Macao. In their letter, they speak of their understanding of the motherland and express determination to make the motherland and Macao better when they grow up. (Photos: People's Daily)

"Hello! I've received your letter. Your colored paintings are really lovely and your words are very sincere, which vividly presents the beautiful hearts of the children," Xi wrote.

"At a young age, you already know that the motherland is Macao's strong backer. I am so glad about it."

Xi extended the greetings in a letter dated May 31, 2019 to primary school pupils in Macao in response to their letter.

Xi always replies to children’s letters before International Children’s Day. Apart from greetings, he encourages children to love the motherland and people of the country.

He encouraged students to cherish time and study hard with a grateful heart, and to grow into a useful person for the country, the people and the society.

On May 30, 2016, Xi replied to a letter from 12 pupils based in Taizhou, Zhejiang Province, who were also the grandchildren of people who cultivated the uninhabited Dachen Islands in the 1950s.

Xi hoped they would learn from their grandparents, love the CPC, the motherland and the people, and contribute to the Chinese Dream of the Great Rejuvenation of the Chinese Nation. 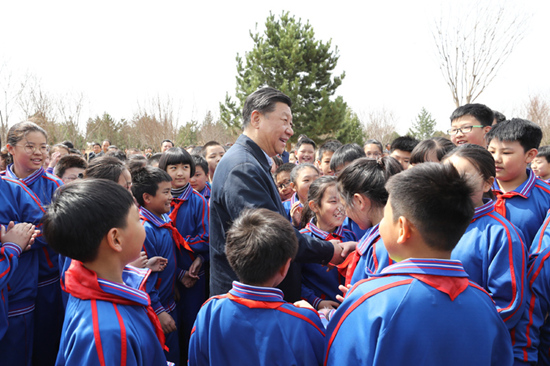 While planting trees, he asked the Young Pioneers around him about their study, life and physical exercises, telling them to develop a sense of caring for nature and protecting the environment, and to build their motherland into a more beautiful place with their own hands. 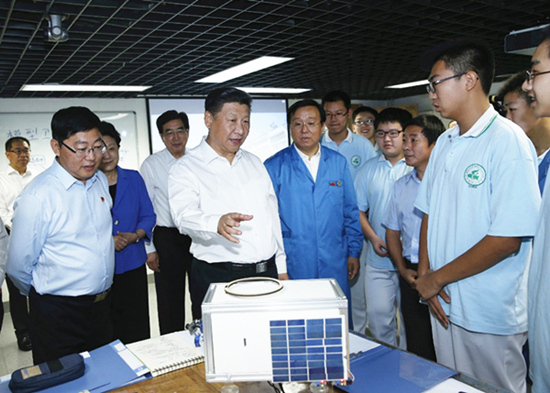 President Xi Jinping talks to student inventors of a mini satellite at Beijing Bayi School in Beijing on September 9, 2016. “Don't forget to tell me when this satellite is launched,” he told the students. (Photo: Xinhua)

He encouraged the young to explore scientific research.

In the science lab, he listened to an introduction to a small satellite developed by the faculty, students and China Aerospace Science and Technology Corporation.

On December 24, 2016, Xi wrote back to the Bayi students, noting that the satellite should shine like a morning star and constantly inspire the younger generation’s enthusiasm for scientific progress.

Four days after Xi’s reply, the experimental satellite was launched from Taiyuan satellite launch base in North China's Shanxi Province, entered orbit and sent back signals.